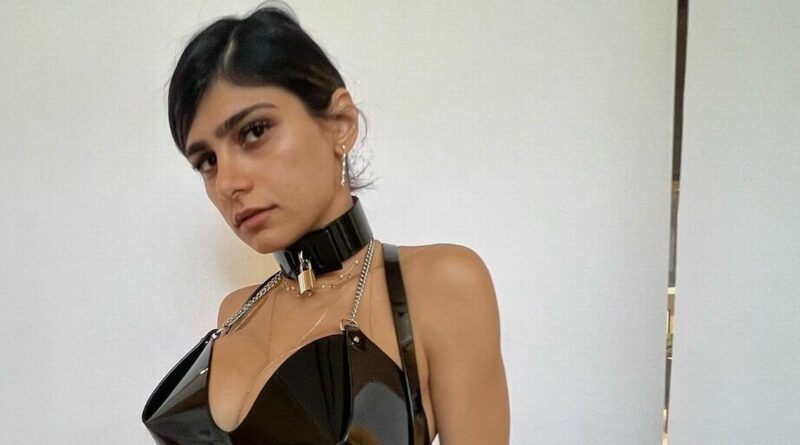 The ex-Pornhub legend has been enjoying a visit to London over the past few days, making the most of the scorching temperatures as Brits enjoyed a mini-heatwave.

But it appears she wasn't just in the city for fun as she revealed she was at fittings – but the project remains a mystery.

Taking to Instagram, the 29-year-old, who shot to fame in 2014, teased fans in an array of outfits that left very little to the imagination.

The brunette beauty looked sensational as she donned a PVC corset that emphasised her cleavage before a second snap had fans in a meltdown.

Posing in PVC lingerie, Mia appeared to have a padlock around the intimate areas of her knickers.

Her upload which has since raked in over 1.9 million likes was flooded with comments from fans, with one commenting: "Gorgeous."

While another chanced their luck and asked: "Will you marry me?"

The former adult actress has been making the most of her time in London, recently enjoying a sightseeing tour through the city.

Cruising along the River Thames past the Houses of Parliament was followed by crossing Tower Bridge aboard the top deck of a Big Bus London vehicle.

She said: "Overcast London days," alongside a pinched fingers and stars emoji.

Mia announced her return to the English capital with a rooftop bikini photoshoot with the stunning St. Pancras Renaissance Hotel in clear view behind her.

She announced her return on Tuesday [June 21] as she held a glass of champagne while donning a rather striking bikini.

"Just touched down in London Town," she wrote on Instagram, referencing the lyrics of American Boy by Estelle and Kanye West.

Before her 10pm photo of the iconic St Pancras building, where the Eurostar terminates, Mia was keeping her fans updated with pictures of her time in France.

But her trip wasn't full of happiness as she revealed her boyfriend JhayCo had to leave her in Blighty while he jetted out to sunnier climates.

The couple had hardly posted much of one another during their UK stay but Mia confirmed his departure with a screengrab of a calendar notification.

She captioned the image: "My assistant adding ':(' to my calendar is the most wholesome thing in the world."