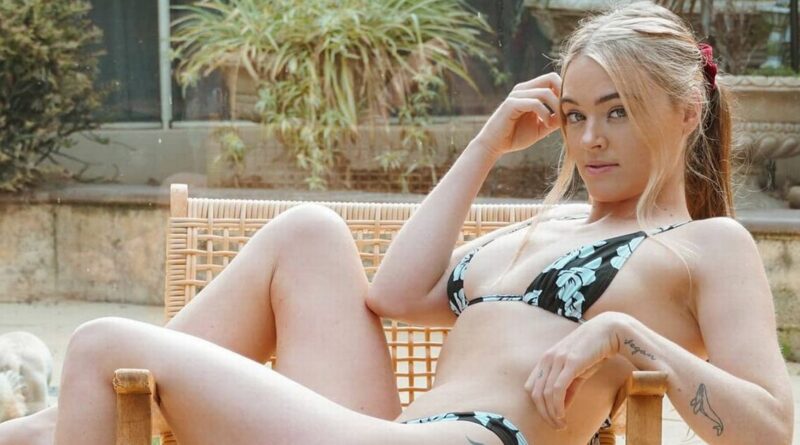 A vegan activist who has become notorious for her protesting on animal rights has made an online rant against a farmer who forcefully removed her from a cattle pen.

OnlyFans star Tash Peterson trespassed at Perth's Royal Show to protest against the treatment of animals.

The 27-year-old, also known as Vegan Booty, can be seen getting removed from a cattle pen by a farmer.

Video footage shows the farmer grabbing Ms Peterson by her t-shirt and shorts as he drags her towards the fencing.

In a post on Instagram, Ms Peterson claims the farmer exposed her "buttocks" as he lifted her by her pants and says she has bruises on her body, including around her groin.

She was also angered that police are not pressing charges against the farmer for his actions in removing her from the pen.

Ms Peterson wrote: "This assault resulted in bruising all over my body and in my groin region due to the force of lifting me by my pants, which exposed my buttocks and the forceful slamming of my body into the fence.

"The police officer told me that because I was trespassing (I have not been charged trespass for this protest), he used reasonable force to remove me from the arena."

Ms Peterson was that she was being removed for the safety of the animals as some can be easily frightened, resulting in possible death.

She was also told that police would not be pressing charges against her for trespassing at the event.

Ms Peterson added: "He told me that the animals are easily frightened and can cause death, so I was being removed for safety.

"As you can see in the footage, I was clearly not being removed for safety as I was thrown around and slammed into a fence."

The activist has gained worldwide attention for her protests, which are all funded through her work on OnlyFans.

She has done a number of high profile stunts that include covering herself in her own menstrual blood and protesting at a Louis Vuitton store in just a G-string.

Her other antics have seen her being arrested for protests at sporting events, supermarkets and has been seen screaming at people in KFC.

She has also been banned from every pub in Western Australia and Woolworths.

Her boyfriend Jack Higgs, who is also vegan, joins her on many of the protests.

Ms Peterson was previously a pool lifeguard but left her job to sell topless and nude selfies to fund her activism on OnlyFans.

She reportedly now makes over $40,000 a month so she can concentrate on activism full-time.

The Western Australia Police Force has been contacted for comment.