Home » World News » Our support for Ukraine is pitifully small: here’s why we must do more 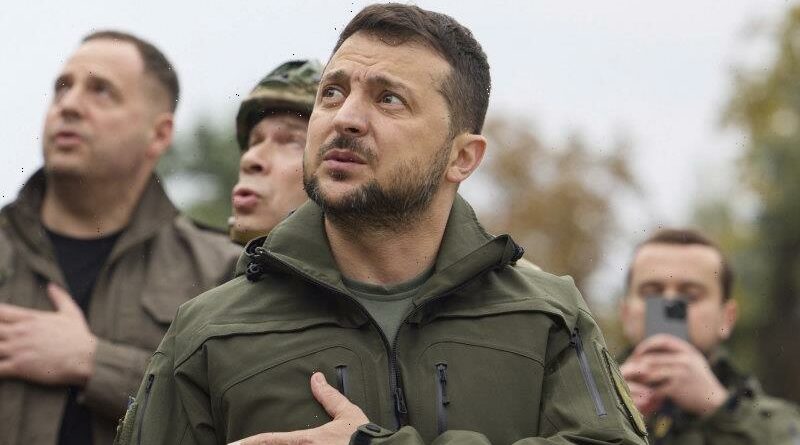 The past two weeks have seen two significant decisions that are indicative of Russia once again changing its strategy for its war against Ukraine. On September 21, President Putin announced that he would “support the proposal of the defence ministry and the general staff on partial mobilisation” for hundreds of thousands of additional troops for Ukraine. Then, on September 30, Putin proclaimed the formal annexation of four Ukrainian provinces into Russia. 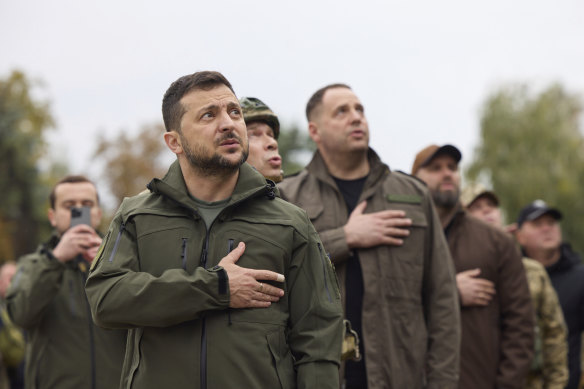 Ukrainian President Volodymyr Zelensky sings the national anthem and raises the Ukraine flag during a visit to the key recaptured town of Izyum.Credit:AP

Taken together, these represent a significant escalation in the war by Russia. Putin hopes that by annexing these four provinces, and mobilising more soldiers to defend them, he might seize back the strategic initiative in this war. He will also wish to prolong it in the hope that Western populations will grow tired of the conflict and force the Ukrainians into an accommodation favourable to Russia.

There was a minimalist response from Canberra. A media release was quietly issued by the government on Sunday. It aligned with Australia’s overall strategy for Ukraine that is best described as small and slow: we promise small amounts of assistance irregularly, and then are slow to deliver it.

So far, the Australian government has committed approximately $388 million in aid, of all types, for Ukraine. This is significantly less than even the annual cost of Australia’s commitment to Afghanistan between 2007 and 2016. Given the total of all government outlays for 2021-2022 was just over $623 billion, Ukraine aid of $388 million represents just 0.06 per cent of government spending for the last financial year.

As the world’s 13th largest economy, and a nation that has regularly sent its people to the far side of the globe to defend other democracies, this small contribution is puzzling. There are ample reasons for why Australia should be at the forefront of providing more military, economic and humanitarian aid to the Ukrainians. 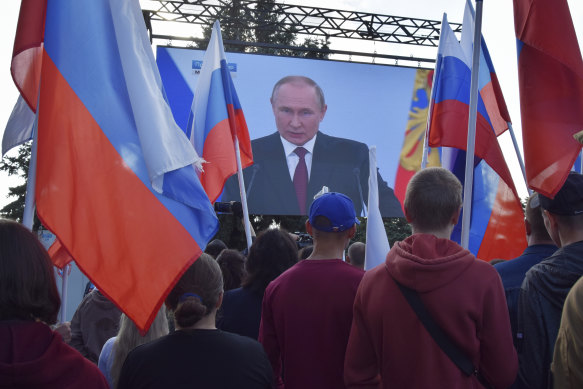 First, while the momentum in this war is with the Ukrainian military, the influx of Russian troops over the coming months will slow down military operations and draw out the fighting. The Ukrainians will need an increased flow of economic assistance as well as military equipment and munitions, to see off this threat – and secure victory – over the coming year.

Second, Australia aid to Ukraine sends a message to friends and partners in our region that we are a reliable security partner upon whom they can rely in times of strife. Words are very fine things, but in security affairs, it is timely and well-considered actions that ultimately matter. An increased flow of more regular aid to Ukraine would reassure our immediate region that we will make sacrifices on their behalf as well if they are threatened.

Third, Australian assistance should be part of our nascent – and yet to be fully formed – national deterrent capacity. The message we send to authoritarian regimes, especially in Beijing and Pyongyang, is that if we are willing to make such sacrifices for Ukraine, a country we hardly know, imagine what we would do for our friends and partners throughout the Pacific. This is a point that appears to be lost on our risk-averse bureaucrats in Canberra.

Fourth, Australia has capacity to provide additional aid. In my recent meeting with President Zelensky, he noted how Ukraine needs more assistance but does not want donor nations to strip their ability to defend themselves. Australia has substantial material resources it could provide now that would have almost no impact on our ability to defend ourselves.

Australia now can manufacture artillery ammunition of the type desperately needed in Ukraine. Our nation also possesses a fleet of more than 200 ASLAV cavalry vehicles we are in the process of replacing. We also have more than 450 upgraded M113 armoured personnel carriers and 59 M1 tanks, which are also about to be replaced. And we have a multitude of Bushmasters. Not one of these vehicles is currently deployed on any foreign military operation.

Finally, aiding Ukraine is simply the right thing to do. The provision of physical, economic and moral aid to fellow democratic nations is an important responsibility of a wealthy middle power. And in helping others, we can also hope that assistance might be provided to us when needed in the future. That is a likely prospect for Australia in the next few years.

Australia can do more to support Ukraine. The prestigious Kiel Institute for the World Economy has tracked aid provided to Ukraine since the war started in February 2022. When measured as a percentage of our GDP, our aid commitment ranks beneath Malta, Cyprus, Romania and Hungary. And the government’s claim that Australia is the largest non-NATO donor to Ukraine also doesn’t align with the facts. As a detailed exploration in August found, Australia ranks sixth out of non-NATO donors to Ukraine.

The last government announcement on assistance to Ukraine was on July 4, 2022. It consisted of 34 vehicles, which is insufficient to equip even a single battalion of Ukrainian soldiers. Delivery of equipment is very slow. Currently, one flight a fortnight is undertaking a painfully slow delivery of equipment. This is extraordinary when the pace of the war, and consumption of material, has only accelerated since July.

There is no doubt that the government of Ukraine is enormously appreciative of the support provided by Western nations. But Australia can do much better than this slow and small strategy in its support for Ukraine.