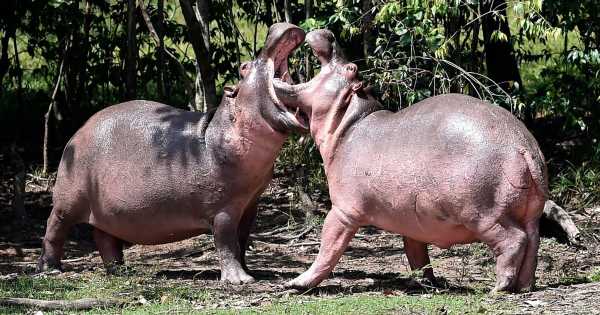 Drugs lord Escobar left behind a handful of hippos when he died in 1993, which the Colombian government have had to deal with for nearly three decades.

Now another attempt at culling their population is set to occur, with veterinarian Carlos Valderrama brought in to deal with "one of many problems" Escobar left the community.

The unusual legacy of drugs kingpin Escobar has led to an overhaul in ecosystem changes, which veterinarians and governments have been trying to fix ever since his death in 1993.

Escobar had illegally imported a number of animals, including hippos, giraffes, elephants and kangaroos, to his ranch in the Colombian countryside so he could fix up his very own private zoo.

But following his death, the animals were abandoned, although a number of them were captured and taken back to their natural habitats.

Hippos, though, are notoriously difficult to lift, and governments at the time thought the financial expenditure of moving them back home would be too pricey, and so left them there.

What followed was damage to the ecosystem and a near 30-year attempt to bring them under control.

Escaping the hacienda way back in 1993, hippos have now cropped up across the country and far away from their initial home, with some showing up as far as 100 kilometres away.

Speaking of the hippos, Valderrama, who has been tasked with castrating the wild beasts, said: "Colombia is heaven for them. But of course they are difficult animals, very aggressive, very difficult to keep.

"We are not in a hospital facility, we are in a field, actually full of lakes. So actually just to administer the anaesthetics is difficult. And they die easily under anaesthesia."

Despite the risk to the hippos, Colombian officials are keen to crack on with the castrating process, which Valderrama described as like trying to cut through "a bulletproof vest".

The vet described the seven-person procedure as "very stressful" and added: "We only have a 50% chance to be able to do it properly without the animal dying."

Currently, Colombia boasts a total of 120 "cocaine hippos", BBC reported, although Valderrama praised the the "resilient" nature of Colombians who were still dealing with the aftershock of Escobar's personal zoo.