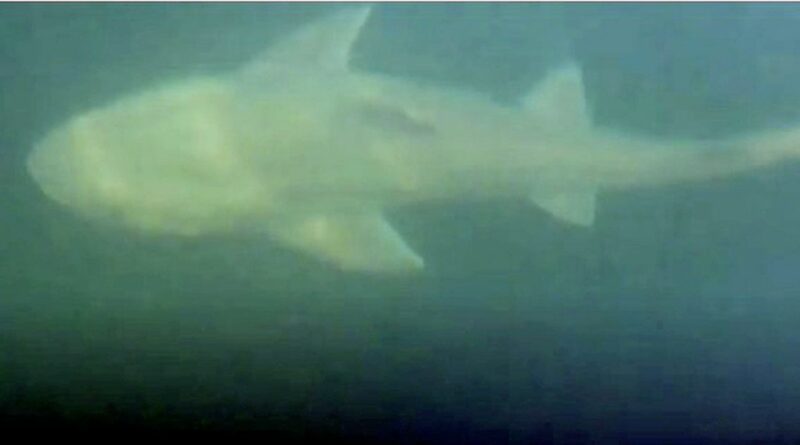 A pair of 'four foot sharks' were filmed swimming near a UK beach which was evacuated like a scene from Jaws weeks later.

Anthony Robins, 48, was paddle boarding at Hengistbury Head, Dorset when he caught on camera a duo of marine predators cutting through the clear water below.

On Wednesday nearby Boscombe beach was emptied by lifeguards after a “large aquatic animal” was spotted yards from the shore, DorsetLive reports.

The RNLI closed the beach to search for the reported ‘shark’, with claims that the unidentified creature pulled a fisherman's rod from his hand and it brushed up against an 11-year-old boy.

Anthony and his friend Nick Jenner, both 48, are frequent paddlers in the area but say this summer is the first time that they have seen sharks in the sea off the Dorset coast.

Anthony told Dorset Live: “We were about 400 yards offshore.

“The water was absolutely glassy so you could just see anything cutting through. We saw the dorsal fins from about 50 yards away and so we moved towards them.

“The pair of them were consistently swimming with the larger one in front and the smaller behind."

Both Anthony and Nick are active members of the local SUP and coastal sports groups.

Through local commentators, they have been able to speculate what types of sharks the creatures may have been.

He added: “They were about 4 foot in length and my mates have said they are likely to have been tope or smoothhounds."

With topesgrowing to a potentialof nearly 2m in length and smoothhoundsto 1.5m , the pair are likely to be young and growing.

Anthony added: “I reckon they are always there, it’s just sometimes when the water is so flat you can see anything.”

The sighting comes as swimmers were on Wednesday (August 4) evacuated from the water at Boscombe beach after the RNLI received reports of a “large marine animal” and “significant movement” in the sea.

Lifeguards raised the red flags and ordered beach goers to avoid the water while they conducted a search of the area.

The official advice is to stay 200 metres away from sharks or large marine animals.

Twitter user @cocozuminova told Dorset Live on August 4: "I heard the announcements by the lifeguards to say to stay out of the water because of a marine life sighting and the coastguard suggested it might be a shark."

Steve Lutwyche also posted on Twitter: “This is not a drill, I’m on the beach at #Boscombe where the RNLI have had to red flag the beach due to reported sightings of a shark!

“(Actually just reopened now. Where is Chief Brody when you need him!?)"

A RNLI spokeswoman said: “On Wednesday, August 4, RNLI lifeguards received reports of a large marine animal in the sea near Boscombe Beach, Dorset.

“As a precautionary measure, lifeguards asked beach visitors to evacuate the water and put up red flags.

“Lifeguards used their Rescue Watercraft (RWC) to scan the area and visitors were able to go back into the water half an hour later.

“The RNLI recommends you always visit a lifeguarded beach and report any concerning wildlife to the lifeguards as soon as it’s spotted.”

Lifeguards have since said it is safe to be in the water and that shark sightings are rare.

But swimmers should keep their distance – ideally staying 200 metres away – if there is a scare.