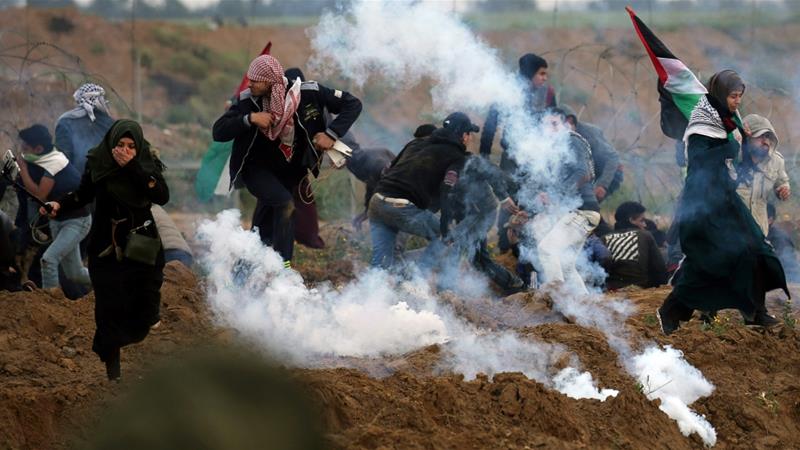 A 15-year-old Palestinian boy was killed by Israeli soldiers on Wednesday during an evening protest near the Israeli fence east of the Gaza Strip.

According to the Gaza ministry of health’s spokesperson Ashraf al-Qidra, the teenager was identified as Saif al-din Abu Zeid, who was shot in the head by an Israeli sniper east of the besieged enclave.

Six other protesters were wounded by Israeli forces and were taken to Shifa Hospital for treatment.

Every night since February, young Palestinian men, known as the “night disturbance unit”, have been gathering by the border with Israel as part of the Marches of Return protests, which began in late March last year.

Tens of thousands of Palestinians have taken part in the demonstrations, demanding Palestinians be allowed to return to the lands their families were ethnically cleansed from in 1948 by Zionist paramilitaries.

They also demand an end to Israel’s 12-year blockade of the Gaza Strip, which has gutted the coastal enclave’s economy and deprived its roughly two million inhabitants of many basic commodities.

At the end of February, United Nations investigators said there is evidence pointing to crimes against humanity by Israeli security forces who shot, injured and killed Palestinians during the massive protests last year.

A UN Commission of Inquiry consisting of independent human rights experts counted 189 Palestinians killed and estimated more than 9,000 injured. Other counts put the number of Palestinian victims killed at
260 and the injured in excess of 26,000.

One Israeli soldier was killed by a Palestinian sniper and four others were injured during the demonstrations, the UN report said.

Israeli Prime Minister Benjamin Netanyahu dismissed the report, saying that it “is setting new records of hypocrisy and lies, out of an obsessive hatred of Israel, the only democracy in the Middle East.”

Meanwhile, early on Thursday, Israeli warplanes launched raids in the vicinity of the new port in Khan Younis in the southern Gaza Strip, with no reports of casualties.

The Israeli army confirmed on Twitter that “fighter jets and aircraft struck several military targets in a Hamas compound in Gaza.”

No injuries were reported, but according to local Palestinian al-Quds Radio, facilities were destroyed and nearby houses were also damaged.

The army added that it held Hamas accountable for the cross-border attacks, which it said hit an empty area in southern Israel. No damage or injuries were reported and no one had yet claimed responsibility for firing the rocket.