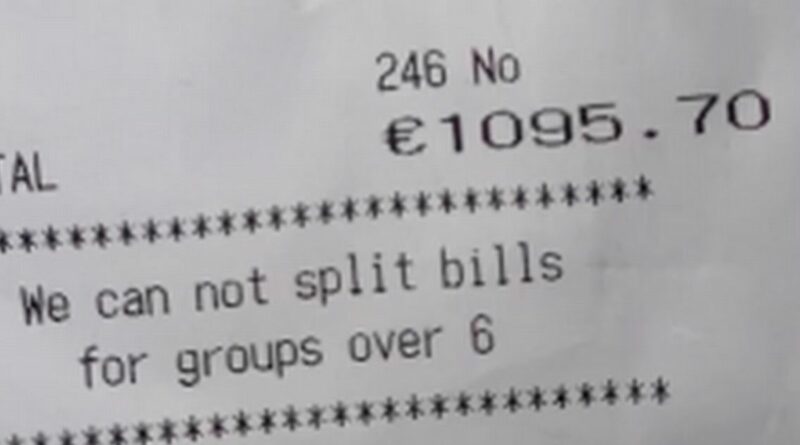 Pub-goers were charged an eye-watering four-figure bill for four hours worth of drinking in a popular Irish boozer.

The party attending a birthday in a popular Galway pub racked up the "colossal" receipt of drinks despite only being in the boozer for four hours from 7pm to 11pm.

One punter didn't wait until the morning to whip out the receipt from the back pocket and instead took a video at the end of the night, Galway Beo reports.

Over €70 was spent on Guinness in one go alone, while rounds of vodka and baby Guinnesses also got a hard hit marking up well over €100 each in total.

Doubles and dashes soon saw the bill skyrocket for the group who introduced jagerbombs and more shots before the night came to a close.

Whiskey and Beamish were also a steady favourite on the night with Beefeater Gin and Captain Morgan also drank by the birthday group throughout the 240-minute sitting.

The person who shared the video of the bill with Galway Beo described it as "colossal".

As with the pub rule, stated on the bottom of the receipt, the group were not allowed to split the bill for groups over 6 meaning one of the partygoers was left to pay the lot in total.

The news comes after a couple of women who went out having drinks with friends thinking to have a "few quiet ones" have shared the eye-watering drinks receipt which totalled £580 in September this year.

If you like this story, make sure you sign up to one of our totally-free newsletter's here.

TikTok users Thamara and Suelen posted a never-ending receipt with dozens of beers and spirits on their account and viewers were stunned by the amount of alcohol they ordered.

They said: "Come for a 'few quiet ones'…that's what they said!"

They visited the Railway Bar in Drogheda, Ireland and went on an 11-hour drinking session on Saturday, August 28.