‘Um, I’d rather live without it…’ The awkward moment Fiona O’Loughlin asks a woman who was paralysed in a horror skydiving accident if she’s ‘grateful for her accident’

This is the moment that a panellist asked a woman who became paraplegic after a skydiving accident was ‘grateful’ for what happened.

Appearing on the Sunday Project Emma Carey opened up about a horror skydiving accident that left her with a spinal cord injury from breaking her back in two places.

Comedian Fiona O’Loughlin, who was on the show’s panel, asked Ms Carey if she was ‘grateful’ for the accident that left her needing to learn how to walk again.

Ms Carey is currently in Melbourne about to start the Wings For Life World Run, which raises money for spinal cord research.

Ms Carey is an ambassador for the event.

After what appears to be technical difficulties Ms O’Loughlin calls out to Ms Carey, calling her an ‘incredible young woman’. 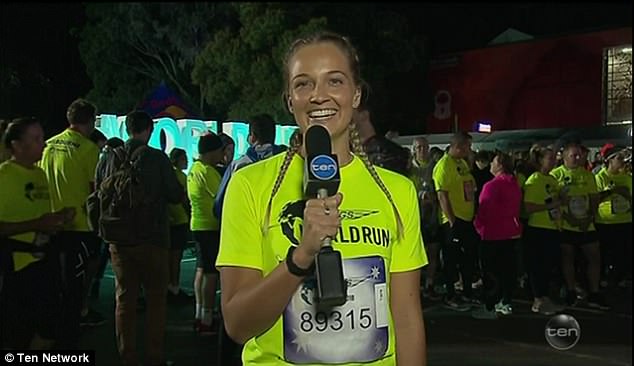 Ms Carey (pictured at Wings For Life World Run 2018) said that while she would rather live without the injuries, she wouldn’t take it back as it made her the person she is today

‘Are you almost grateful for the accident?’

Ms Carey pauses before repeating back the question to the panel.

She finally says: ‘That is tricky.’

‘Obviously I would much to be living without these injuries but there is no way I could take it back,’ Ms Carey replies. When Emma Carey (pictured) embarked on a three-month European tour with her best friend in 2013, it was supposed to be the trip of a lifetime

She explains that she has gained so much and wouldn’t be who she was today without it.

‘In a way, I am extremely grateful.’

Ms Carey embarked on a three-month European tour with her best friend in 2013, which was supposed to be the trip of a lifetime.

But five years later, the 25-year-old can perfectly recall the horrific incident that forever changed her life.

On the fifth day of their trip, Ms Carey decided to skydive in Switzerland, explaining she wasn’t at all nervous about jumping out of a helicopter.

‘I remember thinking it was the best feeling ever,’ she told Daily Mail Australia this week. 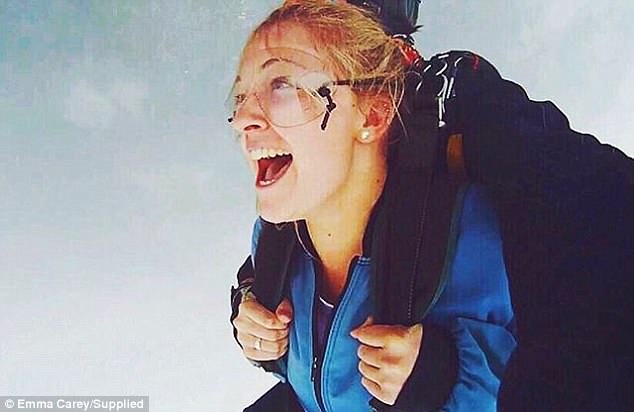 On the fifth day of her trip, Ms Carey decided to skydive in Switzerland, explaining she wasn’t at all nervous about jumping out of a helicopter

But the dive didn’t go to plan.

Ms Carey’s parachute and emergency chute became tangled and choked her instructor, causing him to pass out.

‘He was unconscious the whole time and so he couldn’t do anything to help,’ Ms Carey said.

The pair fell to the ground so fast Ms Carey was certain it was her last day on earth.

‘I didn’t think it was possible for someone to survive something like that. I remember thinking ‘I am not ready to die’,’ she recalled. 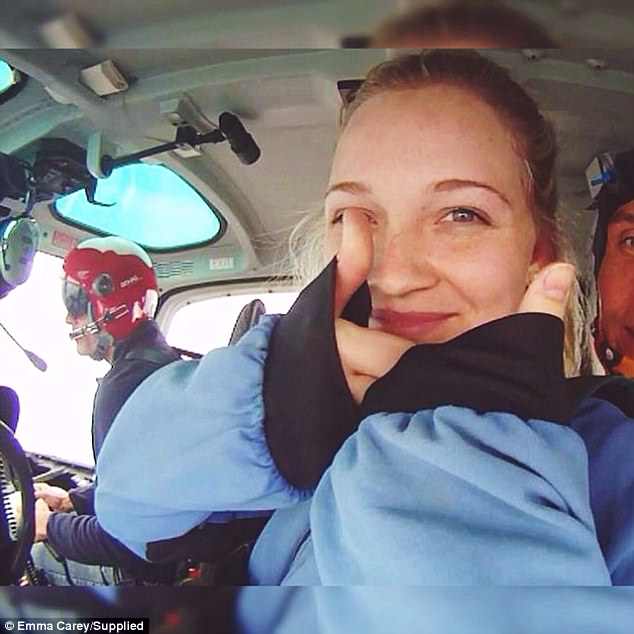 This photo was taken moments before Ms Carey’s parachute and emergency chute became tangled and choked her instructor, causing him to pass out 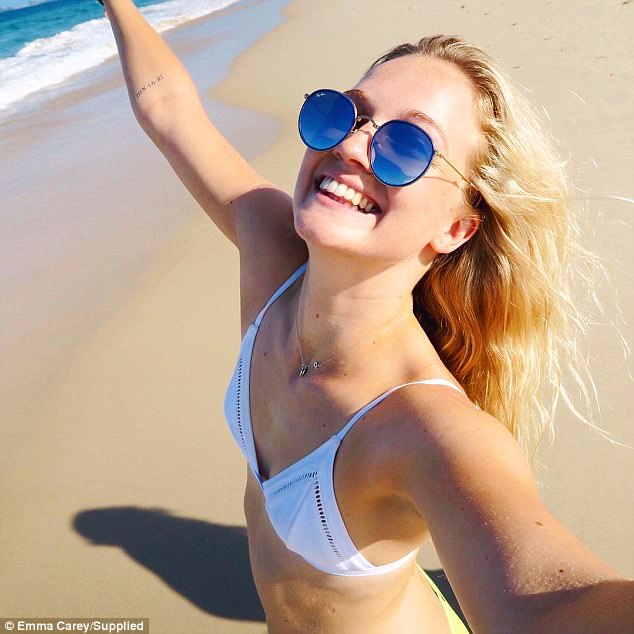 Ms Carey and her instructor fell to the ground so quickly that she thought they were going to die. She told Daily Mail Australia that she remembers thinking that she wasn’t ready to die yet

Ms Carey took the brunt of the fall, landing on her stomach, while the instructor landed on top of her.

When she tried to get up to help him, she realised that she couldn’t move her legs.

Ms Carey’s spine was broken in two places. She also broke her pelvis and shattered her teeth.

‘But the main thing was when I broke my back I also got a spinal cord injury so I was a paraplegic,’ she told Daily Mail Australia.

She spent four months in hospitals in both Switzerland and Australia. 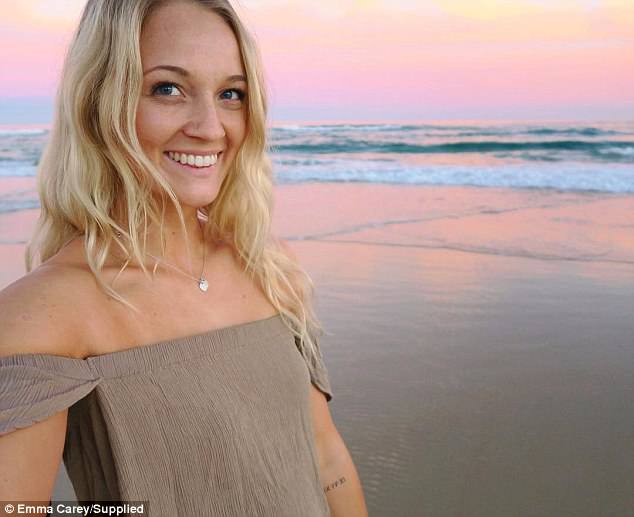 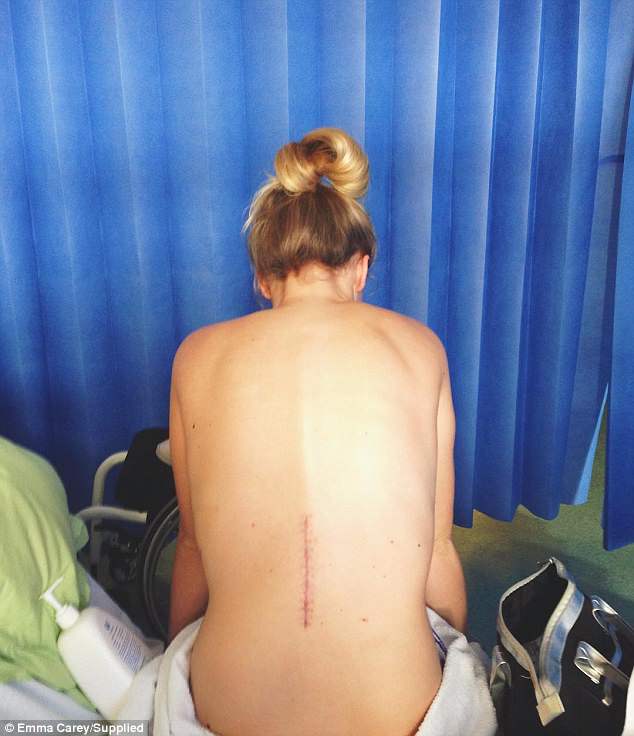 She thought he was dead so she tried to get up to help, which is the ‘scary’ moment she realised she couldn’t move or feel her legs 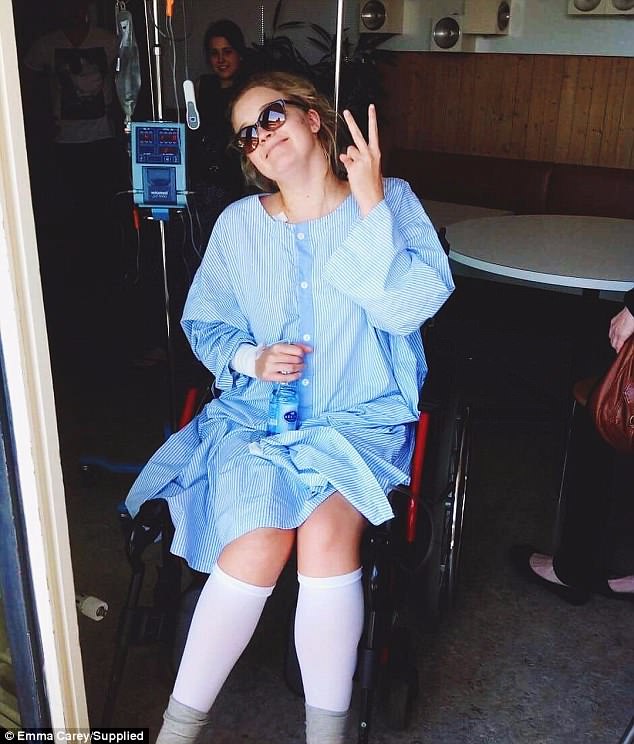 The then 20-year-old had broken her back in two places, as well as having broken her pelvis and shattering her teeth. When she broke her back she got a spinal cord injury – making her a paraplegic

Since she has regained movement in her legs – and stunned doctors when she was able to get on her feet just a year after the accident.

Ms Carey still can’t feel her lower limbs, expect for her shins, but now manages to walk short distances with a limp.

Her muscles don’t work like they used to. Her bowels also don’t work and she has to use catheters and enemas to go to the bathroom.

Ms Carey has openly spoken about this on her Instagram page.

The 25-year-old has posted images of herself covered in urine as her bladder can only hold 100mL of liquid, leaving her with no choice.

She also posted an image of her in hospital after a urinary tract infection due to her use of catheter. 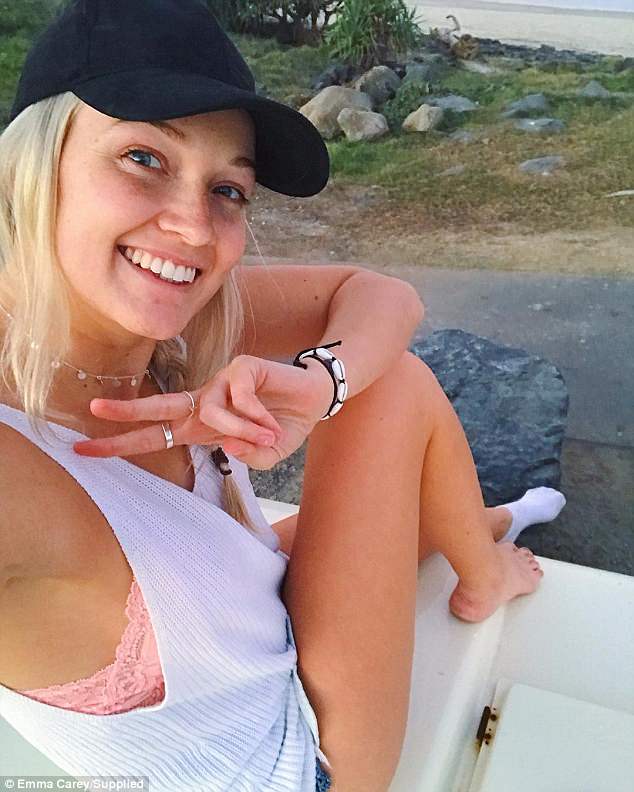 Ms Carey spent four months in hospital and while she has regained movement in her legs her muscles aren’t what they used to be. She can only feel her shins and walks with a limp 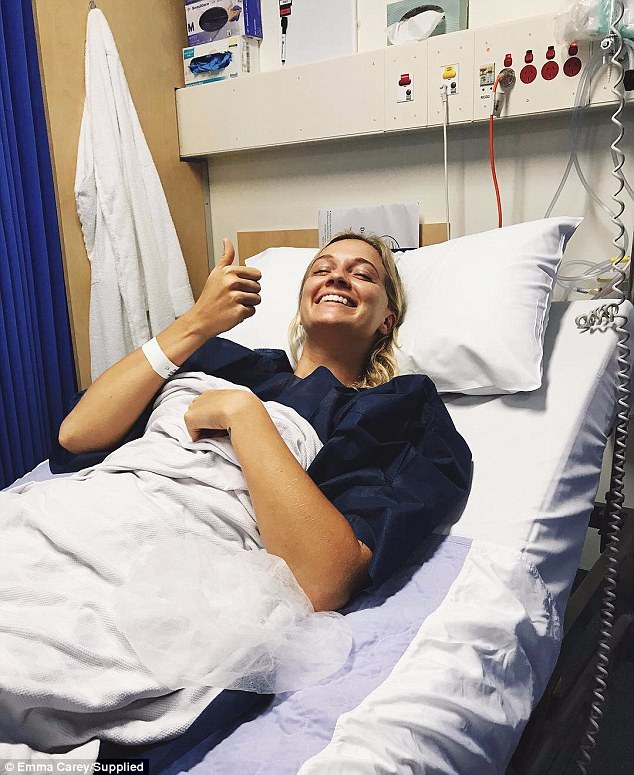 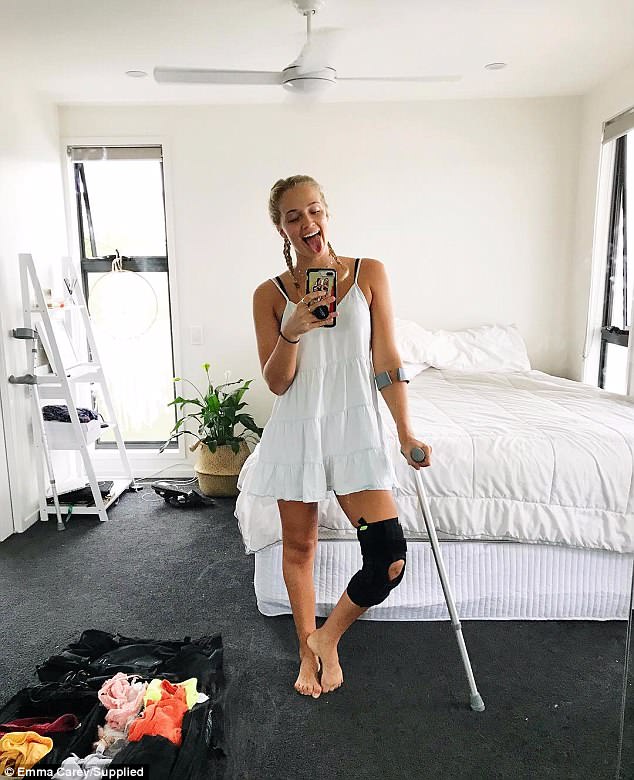 Ms Carey was again unable to walk and back in a wheelchair. Just as her foot was healing, a wound opened on the other one

Not being able to feel her legs leaves her open to injury. Last year she was painting a mural on Sydney’s Bondi Beach and cut the bottom of her foot.

After weeks of antibiotics and time in a cast there were fears that the foot had to be amputated.

Ms Carey was again unable to walk and back in a wheelchair. Just as her foot was healing, a wound opened on the other one. 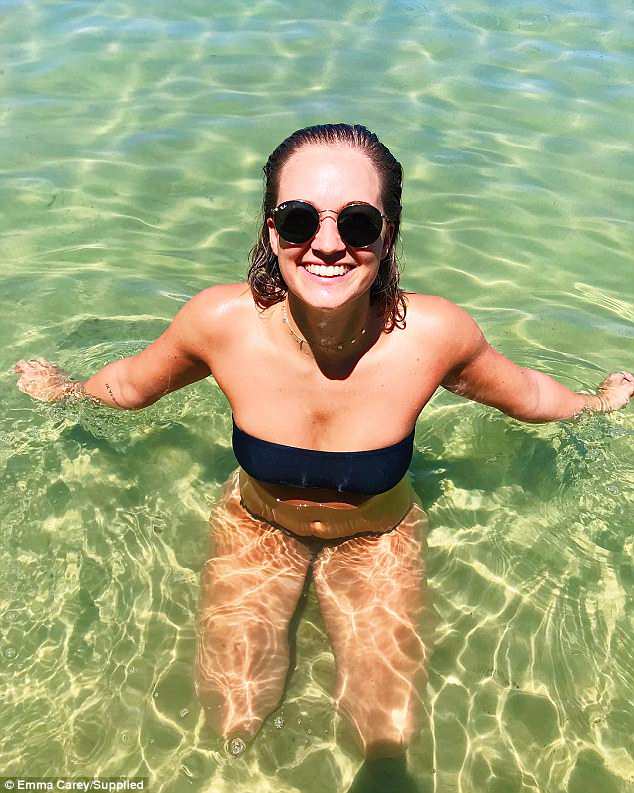 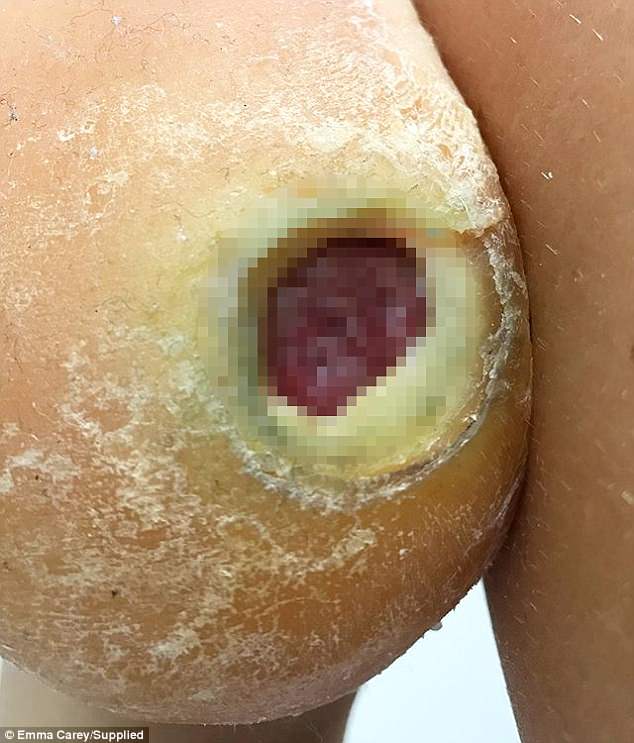 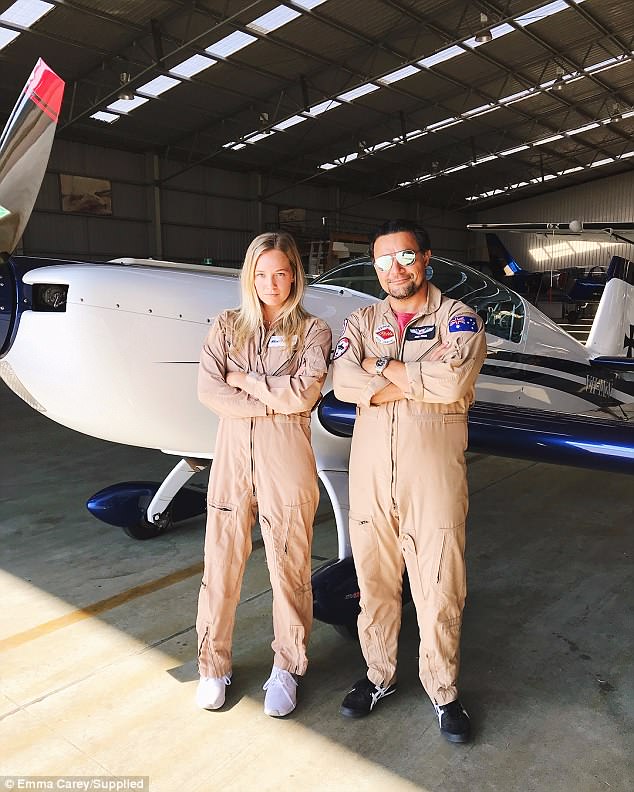 It took 12 months, two weeks and three days until both her feet healed completely.

Then in 2018 she tore a ligament in her knee as she was standing up – before finding out she also had a tumour in her knee that needed to be removed.

But it seems nothing can stop her from doing all she can to raise awareness about spinal cord injury. 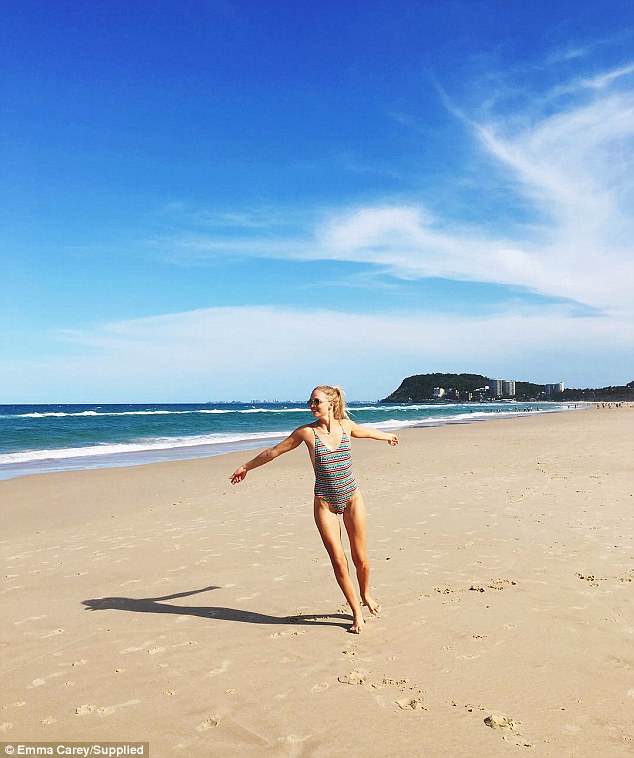 Due to the fall Ms Carey also needs to use a catheter and enemas to go to the bathroom, openly sharing on social media how she deals with urinating herself 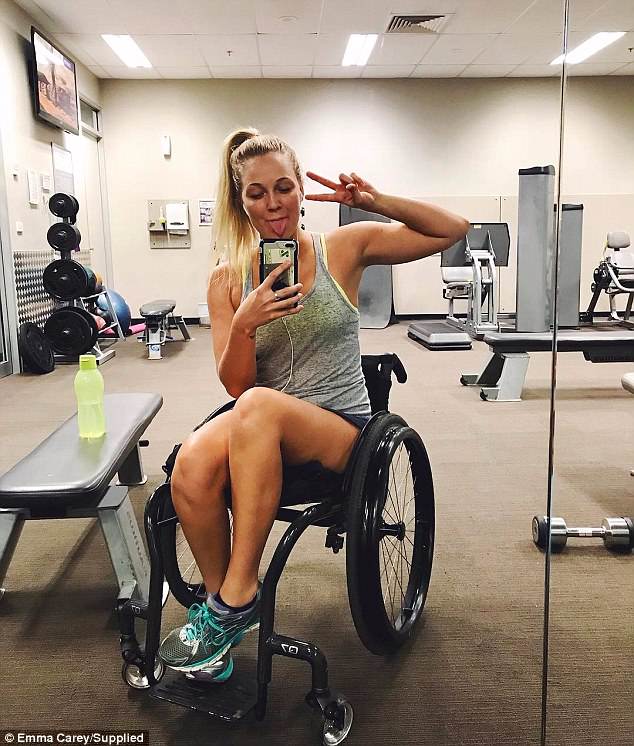 Emma Carey is taking on the Wings for Life World Run, which she is also an ambassador for. Last year she competed in a wheelchair due to the cut on her foot

On Sunday, May 6, she will be in the Wings for Life World Run, which raises money for spinal cord injury research.

She is also an ambassador for the event.

At 9pm in Melbourne the race will begin and instead of a finish line competitors try to keep in front of a catcher car.

The first year Ms Carey competed she had a friend under each shoulder supporting her.

And last year she did the race in her wheelchair, unable to walk due to the hole in her foot.

This year Ms Carey plans to walk five kilometres – a feat she hasn’t done since her fall. 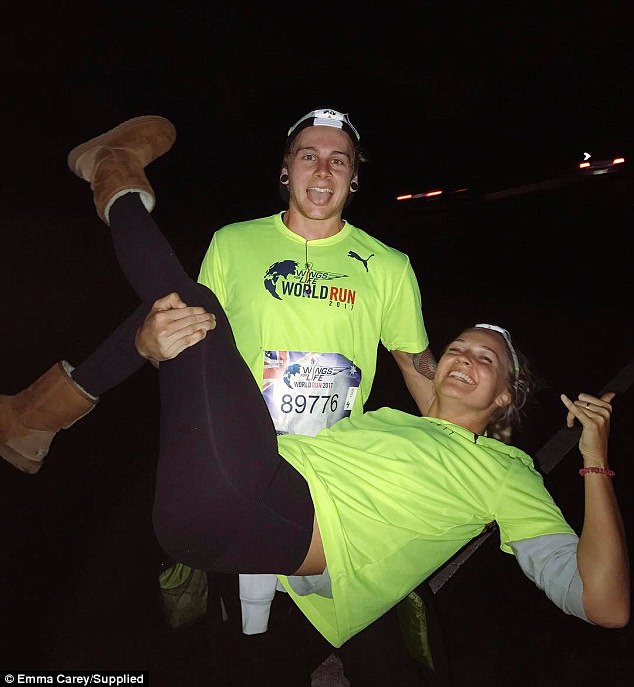 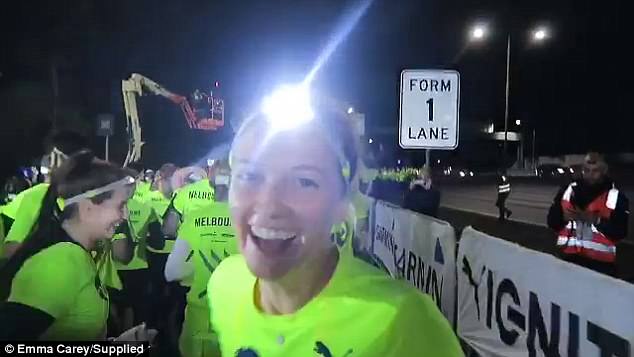 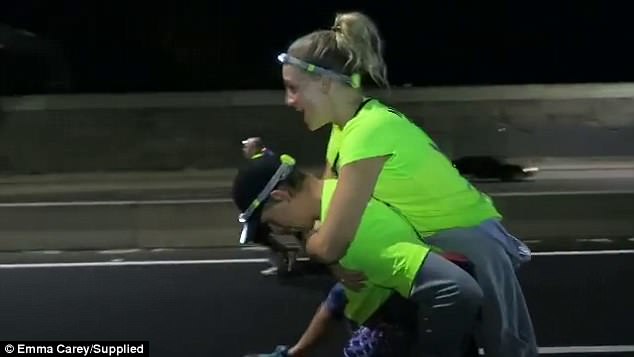 But to her, most importantly, she gets to raise awareness about spinal cord injuries.

‘Their (Wings For Life) motto is ‘run for those who can’t’.

‘I just remember thinking all the people doing the run are doing it for people like me so we can walk again.

‘Now that I am lucky enough to be able to walk I would just love everyone else in a wheelchair to get that as well.’

She explained that before her personal experience with spinal cord injuries she knew nothing about them. 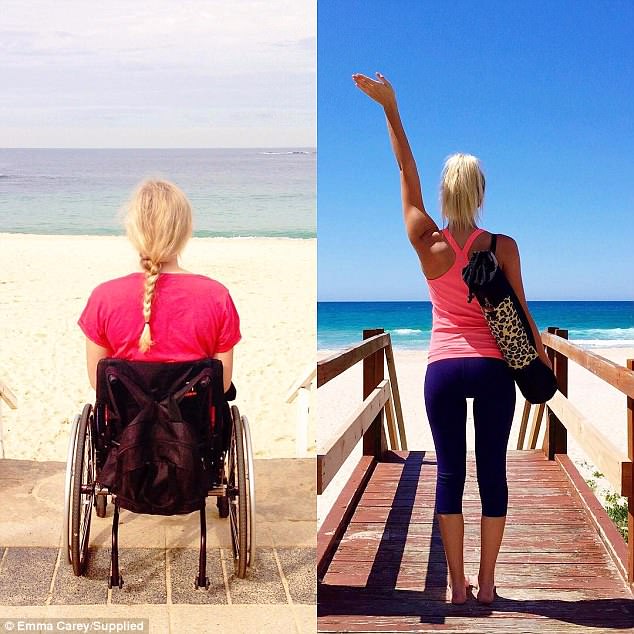 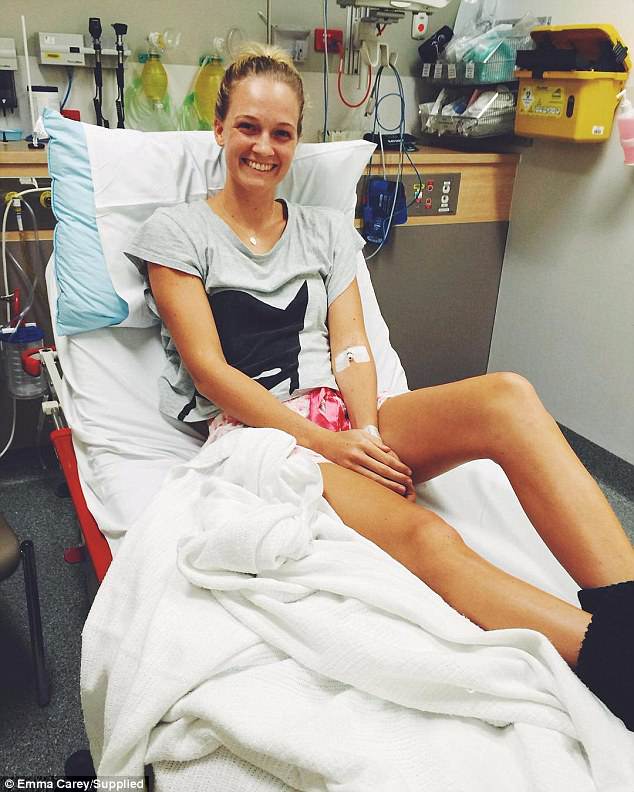 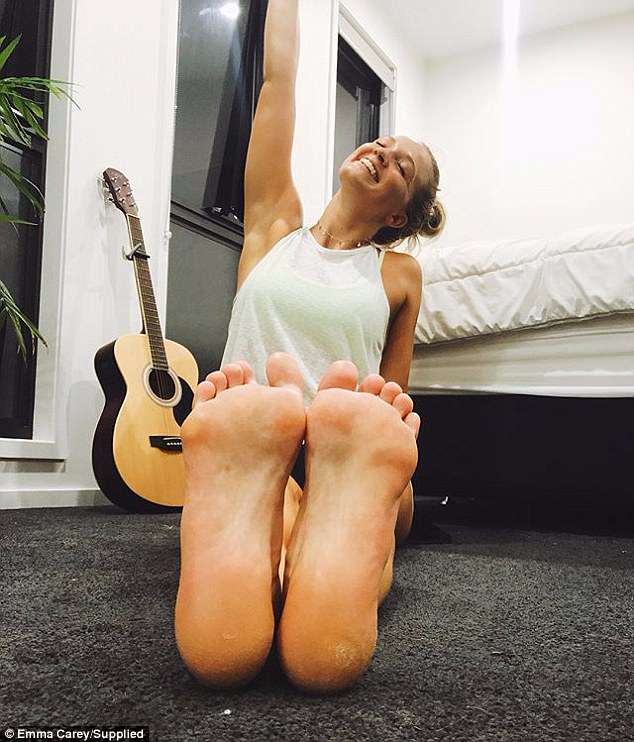 After the 2017 run Ms Carey wrote on Instagram that the race was ‘funnest, most inspiring, uplifting, enthusiastic race on the planet’

‘When I saw someone in a wheelchair I just thought their legs didn’t work. I didn’t know there was a bunch of stuff that came along with it,’ she told Daily Mail Australia.

After the 2017 run Ms Carey wrote on Instagram that the race was ‘funnest, most inspiring, uplifting, enthusiastic race on the planet’.

She said: ‘To all my broken back fam… the world is on our side. With this energy behind us, we’re going to do amazing things’.

She said that while she hasn’t been able to prepare for the physical side of the event as much as she’d have liked, she has walked every day she has been able to.

The race will be held around the world starting at the same time.