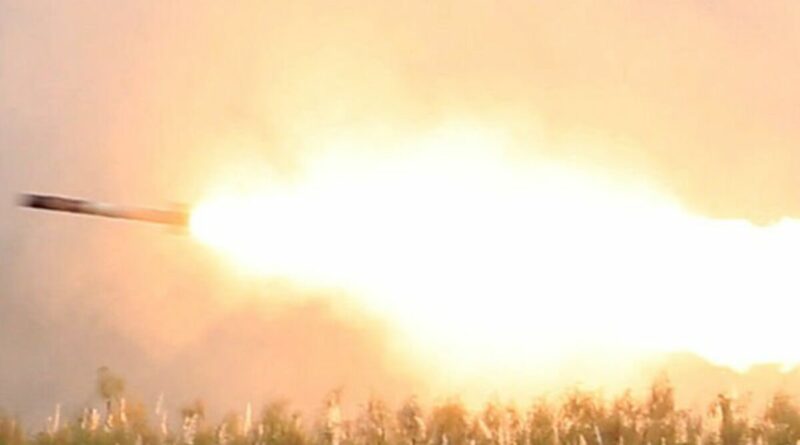 Documents abandoned by Russian troops have offered a stark insight into the sheer panic which gripped them as Volodymyr Zelensky’s forces made stunning advances in the east of the country. The evidence was uncovered after Russian soldiers were forced to beat a hasty retreat from their former headquarters in Balakliia, a town 90 kilometres south of Kharkiv, after coming under heavy bombardment from US-supplied HIMARS rocket launchers.

Once they had gone, Ukrainian troops found vast numbers of papers, some scattered on the floor, others stuffed in a furnace.

One handwritten notebook contained details of information including the coordinates of Russian intelligence units, records of calls from commanders, details of battles, men killed and equipment destroyed, and accounts of a breakdown in morale and discipline.

In total, thousands of documents were recovered, painting a damning picture of the events leading up to the Russian retreat from north-eastern Ukraine.

Soldiers were revealed to be struggling with surveillance and electronic warfare, using off-the-shelf drones flown by barely trained soldiers.

Equipment for jamming Ukrainian communications was often out of action and by the end of August, the force was depleted, hit by death, desertions and combat stress.

t’s a game of roulette. You either get lucky, or you are unlucky. The strikes can land anywhere

Two units – comprising roughly one-sixth of the total force – were operating at just 20 percent of their full strength.

The documents also reveal the increasing effectiveness of Ukraine’s forces and provide clues to how the eight-month-old war might develop, with Russia now under intense pressure on the southern front around the Black Sea coast.

In the weeks leading up to their retreat, Russian forces around Balakliia were hit by wave upon wave of HIMARS missiles targeting command posts.

One Russian officer who asked to be identified by his military call sign Plakat Junior 888, and who served in the Balakliia force for three months, told the Reuters news agency one of his friends bled to death in early September after a Ukrainian HIMARS strike.

He said: “It’s a game of roulette. You either get lucky, or you are unlucky. The strikes can land anywhere.”

JUST IN: Putin ‘preparing for conflict with West’ – and may target dam

The documents in the bunker name Colonel Ivan Popov as the commander of the Russian military force operating from Balakliia.

Along with many of his senior officers, Popov, who served in Russia’s war against separatists in Chechnya and the 2008 invasion of ex-Soviet Georgia, belongs to the 11th Army Corps, part of the Russian navy’s Baltic Fleet.

The Balakliia force also included a commandant responsible for keeping the local civilian population in check identified in the papers by an apparent pseudonym, Commandant V. “Granit” (Granite).

He oversaw at least one interrogation centre where civilians were beaten and questioned using electric shocks, according to six former detainees and Ukrainian officials.

Lists of personnel show that conscripts from the Russian-controlled Ukrainian region of Luhansk fought alongside men from Russia’s 11th Army Corps.

The soldiers scribbled on the walls of the base and put up fliers warning of Ukraine’s descent into Nazi rule if they withdrew, while invaders had brought with them old Soviet maps of Ukraine. One unit took over a Balakliia kindergarten.

On July 19, four months after seizing the area, the Russian occupiers encountered their first serious challenge from Ukraine’s armed forces, the documents show, when a column of Ukrainian soldiers, supported by tanks and under cover of an artillery barrage, attacked the Russian front line at Hrakove, a village on the north-western edge of the territory held by the Balakliia force.

By 3pm, an unnamed Russian on the front line radioed his commanders in Balakliia to say his position was being overrun and he had to retreat.

He requested artillery strikes to destroy the post he was abandoning after which all communication was lost.

In the hours which followed, Russian commanders sent in reinforcements and mobilised attack helicopters, but in the course of the fighting, they lost a tank, two armoured personnel carriers and seven men, with another 17 missing and 39 wounded.

Among those killed was Corporal Aleksandr Yevsevleev, a tank commander. A list of casualties inside the command bunker said his abdomen had been torn open, exposing his intestines, and he had shrapnel injuries to his right upper thigh.

After the battle, five soldiers needed treatment for “acute reaction to stress”. Next to each of their names in the medical record was written: “Does not require evacuation.”

On July 19, hours before the battle of Hrakove, an unnamed officer scribbled on the daily briefing note a plea for drones to track the enemy: “Quadcopters!!! Urgent!”

Quadcopter drones are generally not military grade and can be bought in stores and on the internet, Russian troops rely on crowdfunding to buy them.

On July 24, the author of the handwritten notebook recorded that a HIMARS strike had killed 12 Russian soldiers belonging to the 336th marines brigade of the Baltic Fleet.

The fight further eroded morale and discipline among the soldiers.

Artyom Shtanko commanded a platoon that was in the thick of the Hrakove battle and suffered losses, according to his father Alexei and Plakat Junior 888, the officer who served in the Balakliia force.

Alexei said Shtanko refused an order from his company commander to “send his men into artillery fire.”

At the base in Balakliia, the notebook’s anonymous author wrote on July 24 – five days after the Hrakove battle – that Shtanko was a “b***” facing disciplinary action because he “pulled back his platoon and took it into the rear”.

The notebook also recorded the desertion of Roman Elistratov, a corporal in the 9th motorised rifle regiment, which felt the full force of the Ukrainian onslaught.

A small calendar he kept in the trenches during his three months rotation paints a dire picture. Days were marked with scribbled notes saying “Attack” and “Escaped from encirclement” or bearing the names of comrades killed in action.

August 27 was marked simply as “the worst day.” That, he said, was when their position came under heavy artillery attack, and one of his friends died in his arms.

Between September 6 and 8, precision strikes hit the command centre in Balakliia and Volodymyr Lyovochkin, a local man who formerly managed the site, said the entire facility erupted in flames.

Dozens of bodies of Russian soldiers were pulled from the rubble, adding that his house had been “dancing” from the blast.

A video posted on social media on Sept 10 showed Ukrainian soldiers viewing the destroyed hangar where Russian forces had kept their vehicles, with a voice saying in Ukrainian: “This is what the result of HIMARS’ work looks like.”

Two other residents described seeing Russian soldiers throwing away their guns and abandoning their vehicles as they ran away.

One, Serhii, who lived across the street, said: “It was just chaos.”

There had been “traffic jam” of fleeing Russians, he added.