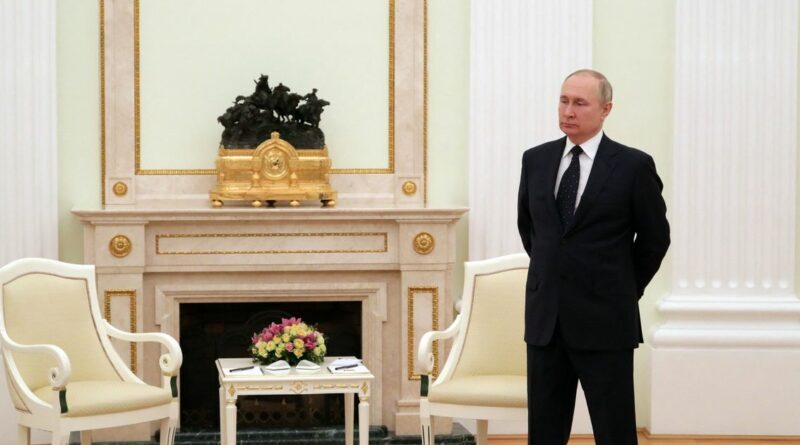 Vladimir Putin has sacked 1,000 of his personal staff as he is scared that they will try to poison him, a report has claimed.

The Russian president has had hundreds of his personal staff replaced over his paranoia, including cooks, secretaries, laundry workers, and bodyguards.

The news comes as Putin's invasion of Ukraine moves into into its fourth week, and Russian forces have so far failed to capture Kyev.

Several private jets belonging to Russian oligarchs have also been spotted heading to Dubai, prompting questions about the domestic security in Putin's Moscow.

A French agent has claimed that it is possible that Putin will be removed from power by a coup coming from within the Kremlin, with assassination being one way that this could come about.

Putin has also drawn ridicule in recent weeks as he has held meetings not only foreign leaders, but also his own inner circle from an almost comically large distance away.

Given that senior political figures have publicly encouraged those close to Putin to try and assassinate him, it seems that Putin's fears are not unfounded.

Senator for South Carolina Lindsay Graham tweeted publicly calling for Putin's death, saying: "The only way this ends is for somebody in Russia to take this guy [Putin] out.

"You would be doing your country — and the world — a great service."

The French intelligence operative claimed that poison is certainly a possible way for Putin to be assassinated if that is what happens.

The Russian government is known to use poison, for example in the poisoning of Sergei and Yulia Skripal with the nerve-agent novichok in Salisbury in 2018.

"The attempt will be from within the Kremlin," the French agent told the Daily Beast, adding: "Russian intelligence is likely the only one left that deploys poison as a default".