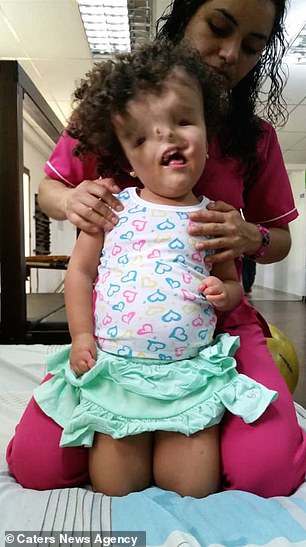 Helianny, three, pictured during physical therapy, was born with a clubbed foot and problems from her brain, eyes and nose not forming properly in the womb

The family of an inspirational toddler who was born with a ‘crown on her head’ have made a desperate plea for surgery that would rebuild her face.

Helianny, from San Cristobal, Venezuela, was born with a range of problems including her brain, eyes and nose not forming properly in the womb.

Her parents Soleannys Lugo, 34, and Henry Buitrago, were advised to terminate her four months into the pregnancy as doctors believed her difficulties were ‘incompatible with life’

They thought she would die shortly after birth but now three-years-old, Helianny still battles on with the support of her loving family.

At birth she was described as looking like a ‘supernatural queen’ due to three protrusions on her head caused by hydrocephaly, which made her skull swell out of proportion due to fluid filling in the cavities and leaving her with brain damage.

Now her parents are fundraising for operations to allow her to live a more normal life, including craniofacial surgery to rebuild her face – which they say is their only Christmas wish.

Soleannys said: ‘A surgery at Christmas would be the best gift it is our best wish and we would be a happy family to see our daughter with another more beautiful face.

‘Having surgery soon has an advantage that it will reduce the scars because as a baby it eventually will disappear. 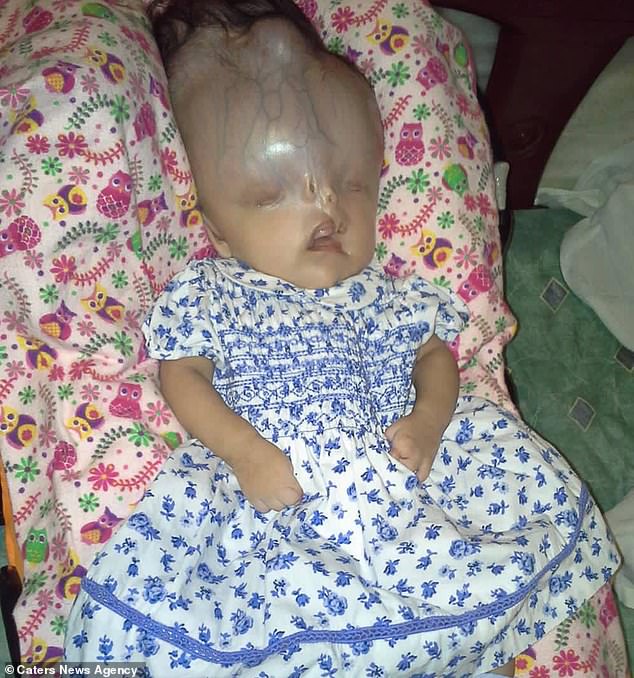 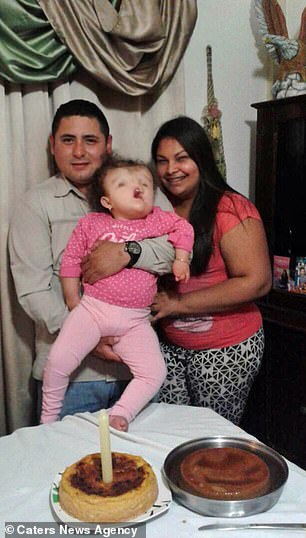 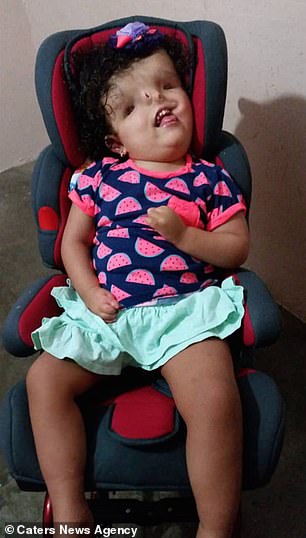 Her parents Soleannys, 34, and Henry, 36, (pictured together left) are now fundraising to pay for craniofacial surgery to rebuild their daughter’s (right as a toddler) face

‘If this happened, she would no longer be rejected because of her looks and could socialize with other children without being pointed out or making bad comments.

‘Unfortunately, here in my country every day is made uphill struggle to afford any treatment or surgery, she has not had any surgery for lack of money.’

Helianny was born via caesarean at 39-weeks, months previously her parents battled to prove she was still worth fighting for and was conscious.

The parents were amazed their little girl survived her first night despite contending with a long list of problems.

Soleannys said: ‘I would compare Helianny’s appearance back then to a “supernatural queen” because she had a crown embedded in her head. 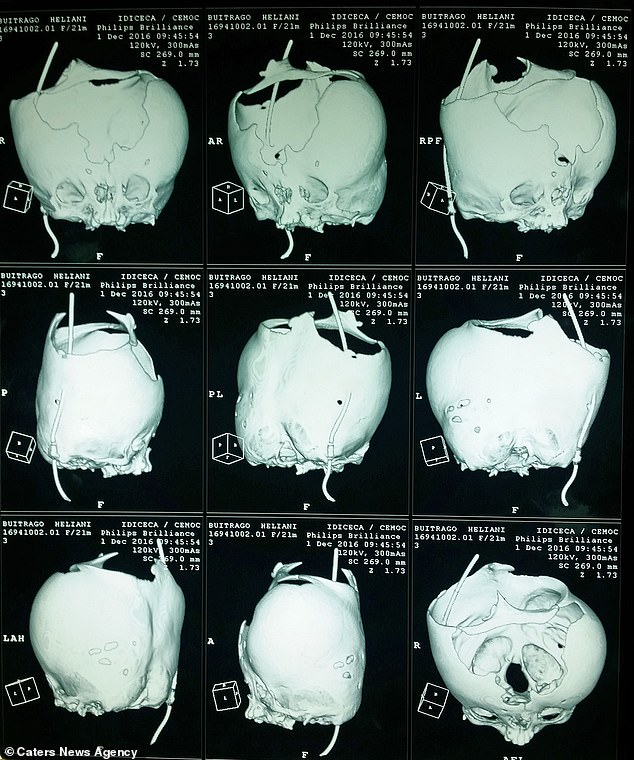 Scans taken shortly after Helianny’s birth revealed fluid had filled the cavities in her brain, which led to her suffering from a swollen skull. This can also cause brain damage 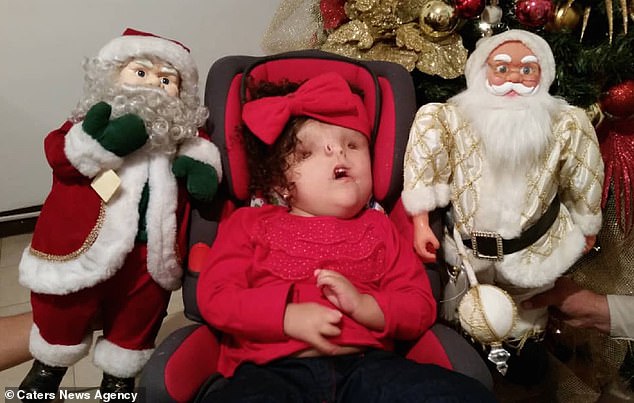 Helianny, pictured at Christmas, has undergone four surgeries so far, two to drain fluid from her brain, the third to correct her clubbed foot and another to reconnect her cleft lip

‘The three protrusions on her head looked like a crown, she had no eyebrows, no eyelashes, very pronounced veins on her head that seemed to burst and pink skin colour in her eyes, where her eyeballs should be.

‘Her nose was completely stuck to the skin with only two nasal holes, one very small and the other slightly larger. But even so I perceived her beauty then and still do to this day.’

Hydrocephalus is a build-up of fluid in the brain, which can damage tissue.

Aside from an abnormally-sized head, other symptoms can include headache, nausea, vomiting, confusion and vision problems.

Hydrocephalus’ cause is usually unknown but may be due to issues with cavities in the brain or an underlying health problem that affects blood flow, such as heart disease.

It can also be acquired by damage to the brain due to a head injury, stroke or tumour.

Treatment is shunt surgery, which involves implanting a thin tube into the brain to drain away excess fluid to another part of the body where it can be absorbed into the bloodstream.

If untreated, hydrocephalus can be fatal due to increased pressure compressing the brainstem, which is responsible for regulating heart rates and breathing.

A patient’s prognosis after surgery depends on their age and general health.

Soleannys recalls the heartbreaking moment she and her husband were told not Helianny would not survive and that they should terminate the pregnancy.

She added: ‘When they told me that Helianny was not compatible with life, I became very sad because I wanted to be a mother and I already felt she was a part of me.

‘Even though we were told she was a vegetable, I assured them she was not because she kicked me.

‘We decided to give her a chance to live and why not give this opportunity to this helpless being who despite not knowing her, I loved with my soul and with all my heart.’

Soleannys was cautious about revealing her to the world for fear of Helianny being ostracised.

The family have also been targeted with cruel comments range from her being called ‘ugly’ to being told they should have aborted her.

She said: ‘Many people bless Helianny and wish a good future, we always appreciate that. There is also a minority that attacks me, saying that I was irresponsible to have continued with the pregnancy.

‘They say that I did not think about the future and that I had not stopped to think what will happen to her when neither her dad nor I are here.

‘I try to ignore those comments but of course I think about them.

‘Nobody knows the future, meanwhile we will continue to work tirelessly so that Helianny can be as independent as possible.’ 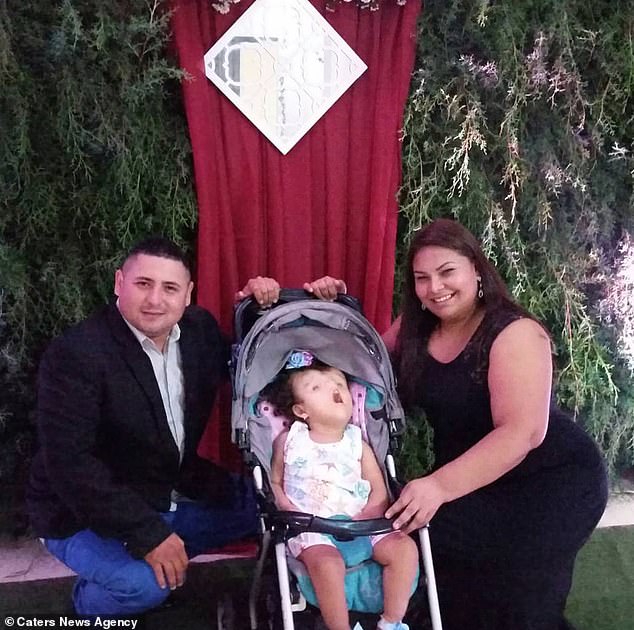 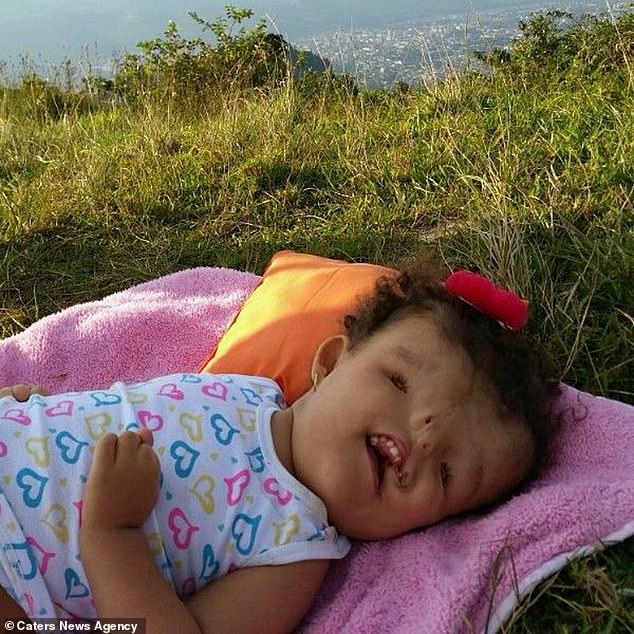 Helianny has undergone four surgeries so far, two to drain fluid from her brain, the third to correct her clubbed foot and another to reconnect her cleft lip.

The family are fundraising for future surgeries that will allow her the best quality of life and repair some of the craniofacial difficulties that complicate her basic functions.

Soleannys said: ‘I dream of seeing Helianny walk, talk and be as independent as possible so that her only limitation is what she limits herself to.

‘Helianny came to this world on a great mission of life, to show us that we complain about so many insignificant things and forget to be happy.

‘She teaches us not to give up and to fight but without ceasing to be an angel.’