Hundreds of parking fines will be repaid to Melbourne drivers after they confused the number 0 with the letter O to pay for a parking space in the CBD.

Victorian Ombudsman Deborah Glass estimates that 1200 drivers made the simple mistake when entering their registration in the PayStay app. 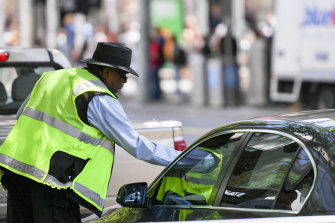 She said the Melbourne City Council had acted unfairly by applying “an overly rigid approach to parking errors” when it upheld the fines on appeal.

“The council knew the number 0 and letter O were virtually indistinguishable on registration plates, and drivers would not be aware they had made an error,” she said.

Melbourne City chief executive officer Justin Hanney said that 450 drivers who appealed their fine should have had their fine withdrawn, but didn't.

He said those drivers – who were fined between July 2017 and July 2018 and from November 2018 to October 2019 – would now be reimbursed and receive a letter of apology.

“Our infringement review process during those two periods did not allow for discretion to be applied where these honest mistakes were made. Parking infringement processes need to be fair and reasonable and in this instance they were not,” Mr Hanney said.

“I apologise to these drivers. I have already put measures in place to support our infringement review team in exercising discretion where appropriate to avoid these issues in the future."

He said that drivers should ask for an appeal if they believe they have been fined for mistakenly using the wrong letters or numbers like 'O' and '0' or 'I' and '1'.

Ms Glass said the council changed its practices in October last year and drivers who now made the mistake should have their $83 fine withdrawn on appeal.

The Ombudsman said that “overzealous” attitudes in the council parking team revealed “a worryingly poor understanding by some in senior management of basic principles of fairness”.

“This mindset was further illustrated by the council rewording its penalty reminder notice,
ostensibly to encourage drivers to make payments as soon as possible, but against their own legal advice that the wording was misleading,” Ms Glass said in her report, tabled in the Victorian Parliament on Wednesday.

The penalty reminder notice is sent to motorists if a fine hasn't been paid after 21 days.

The council's chief legal counsel had provided internal legal advice that sections of the wording were “apt to mislead a person … and appear a threat to a vulnerable recipient”. But the notice was still sent out to motorists for three months, until Ms Glass questioned it, the Ombudsman said.

Her investigation began after a whistleblower complaint alleged that council officers were making bad decisions to raise revenue.

“The allegation that the council was improperly raising revenue was not substantiated,” Ms Glass said.

“The council was losing money taking these matters to court, although the practical outcome of inflexible decision making undoubtedly contributed to the council’s bottom line.

“These actions were apparently driven by an entrenched, overzealous attitude of some in senior management in the parking branch, a mindset that the customer is usually wrong and drivers must be punished for their infractions, no matter how small or how great the mitigation.

“This attitude continued for years, despite some council officers expressing concerns about it to management.”

The council has agreed to all four recommendations, including to conduct an independent review of the behaviours, processes and systems, reporting structures and governance of the parking branch, including implementing a process to monitor the use of discretion in reviewing infringements.

The council will also review its system to ensure it is consistent, and train relevant staff.

More than 11 million cars park in the City of Melbourne every year and the council has issued 15,000 permits to doctors, nurses and frontline workers for access to free parking during COVID-19.