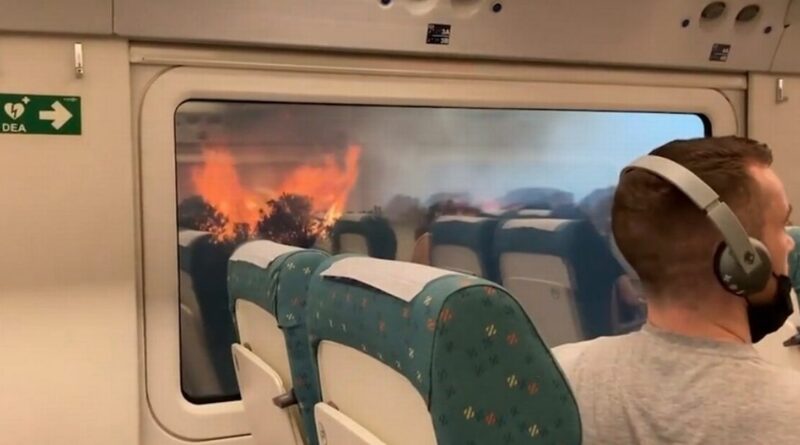 Passengers aboard a Spanish train were transported into hell when their service momentarily stopped in the middle of a wildfire.

The 9;30am service from Madrid to Ferrol passed through the heat-struck town of Senabria which has been blanketed in wildfires in recent days.

The startling footage showed the flames licking around the side of the tracks while passengers screamed in scenes reminiscent of the apocalypse.

READ MORE: Virgin Airlines FA 'sacked after not wearing make-up to work' wins back her job

In the shocking clip, passengers can be seen talking in hushed tones and panicking as they look helplessly out of the windows.

Mere metres from where they are sitting, a veritable inferno can be seen sweeping through the arid Spanish landscape filling the air with flames and smoke.

Speaking to local newspaper El Diario, a passenger named Francisco Seoane Pérez described how in the moment he and his fellow travellers were unsure whether they were safe or not and 'very afraid.'

He said: "When you stopped looking out one window to look out the other, the fire had already moved."

It's understood the affected line was closed a short while later.

Like the UK, Spain has been roasting in unnaturally hot temperatures over the last week.

Spaniards have seen temperatures above 40C today with much of the country under 'extreme danger' warning for fires.