Paul Manafort might ‘never see the outside of a jail cell’, former Watergate prosecutor says as he is locked up for ‘witness tampering’ before his trial

Paul Manafort could ‘never see the outside of a jail cell’ after a judge revoked his pre-trial house arrest and sent him behind bars on Friday over allegations of witness tampering, former Watergate prosecutor Nick Akerman said.

The former Trump campaign manager, 69, was accused of sending WhatsApp messages to potential witnesses in Robert Mueller’s probe of Russian interference in the 2016 election, so a judge decided to jail him to stop this happening again.

Akerman said that Manafort’s advanced age and the precedent set by the hefty sentences handed to one of the Watergate burglars in a bid to make him cooperate meant he faces the possibility, if convicted, of spending the rest of his life in prison.

Scroll down for video. 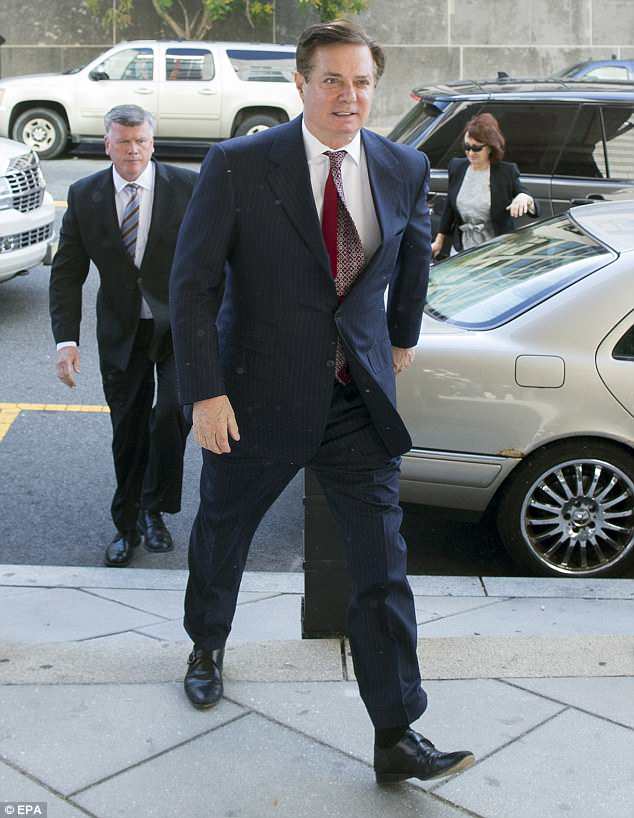 Former Trump campaign manager Paul Manafort (pictured arriving at the Federal Courthouse in Washington DC on Friday) could stay behind bars for life, according to a former Watergate prosecutor

‘Just to put this in historical perspective, what broke the Watergate case was when James McCord got a 25-year sentence,’ Akerman told MSNBC’s Velshi & Ruhle.

‘He was one of the Watergate burglars. He got a 25-year sentence. He was sitting in jail because that’s what made him crack and cooperate.’

Noting Manafort’s age, Akerman added: ‘And here it could be even worse. It could be the beginning of a life sentence. Paul Manafort, if he does not cooperate, may never ever see the outside of a jail cell.’

Manafort will now have to prepare for two federal trials, one in Washington on September 17 and the other in Virginia on July 25, while locked up in a jail cell. 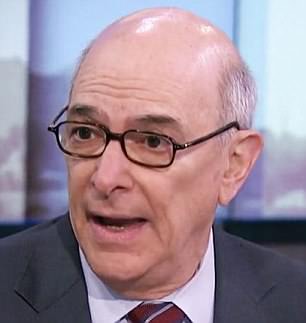 Charges that will be examined in September’s Washington trial include conspiracy to launder money, making false statements and failing to register as a foreign agent for pro-Russian politicians in Ukraine.

The Virginia indictment, which will go to trial in July, will focus on fraud charges. Manafort is accused of hiding the money earned in Ukraine from the Internal Revenue Service and obtaining fraudulent bank loans.

Mueller insists Manafort’s case falls within his jurisdiction because of his connection with both the Trump campaign and to officials in Russia and Ukraine.

Manafort, who was indicted on witness tampering charges last week, had asked to remain on house arrest until his first trial on September 17.

Judge Jackson revoked his bail, ruling in favor of prosecutors who had been pushing for Manafort to be jailed because they did not believe his release terms would prevent him from committing further crimes.

In issuing her ruling, Jackson said she had ‘struggled’ with the decision but she couldn’t ‘turn a blind eye’ to his conduct.

‘This is not middle school. I can’t take his cell phone,’ she said, while adding that he had ‘abused the trust placed in you six months ago.’ 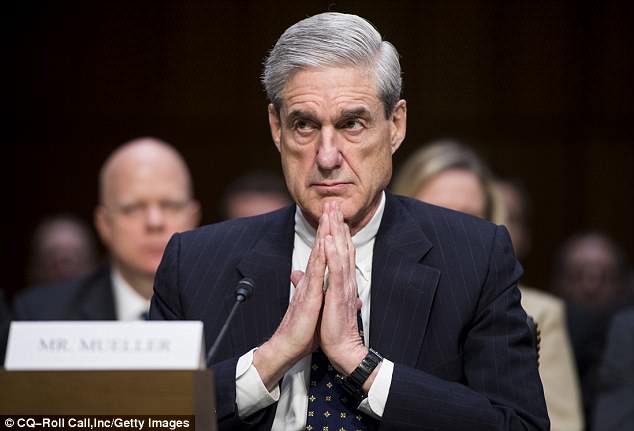 Last week, Special Counsel Robert Mueller (file photo) indicted Manafort on a new charge of witness tampering, and had asked for his bail to be revoked. The request was approved by a judge 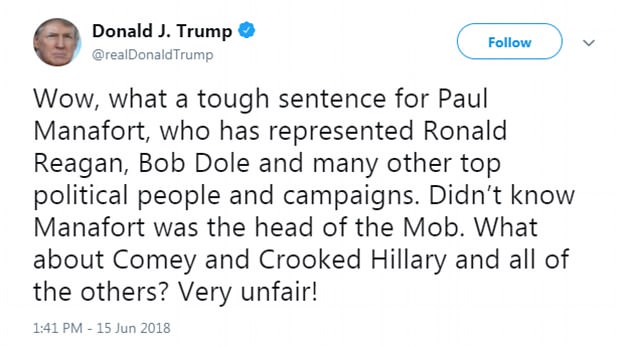 President Trump tweeted on Friday to call the decision to jail Manafort ‘tough’. He incorrectly said Manafort had been ‘sentenced’ even though he has not been tried yet

A federal grand jury indicted Manafort and a long-time associate, Konstantin Kilimnik, last week on charges of obstruction of justice and conspiracy to obstruct justice, adding to the multiple felony counts he already faced.

Manafort was accused of sending WhatsApp messages in an effort to influence witness testimony.

The messages, which were followed by texts and calls, were an ‘effort to influence [witness] testimony and to otherwise conceal evidence’, the FBI said.

He had been confined to his home in the Washington suburb of Alexandria, Virginia and forced to wear a GPS monitoring device since October.

He had repeatedly requested to end his home confinement in exchange for pledging $10 million in real estate as collateral – which Judge Jackson had rebuffed.

He pleaded not guilty to the charges. 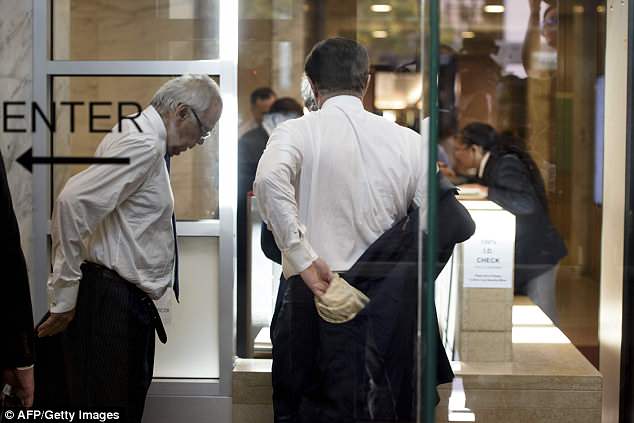 Donald Trump called the decision ‘very unfair’ in a tweet sent on Friday, in which he incorrectly referred to the pre-trial detention as a ‘tough sentence.’

‘Wow, what a tough sentence for Paul Manafort, who has represented Ronald Reagan, Bob Dole and many other top political people and campaigns. Didn’t know Manafort was the head of the Mob. What about Comey and Crooked Hillary and all of the others? Very unfair!’ he tweeted.

The former Trump aide has not been convicted of any crimes or sentenced to prison.

Mueller, whose investigation could threaten Trump’s presidency, is also investigating whether the president’s 2016 campaign colluded with Moscow and whether Trump has unlawfully sought to obstruct the Russia probe.

The president has called Mueller’s investigation a witch hunt and has denied wrongdoing.