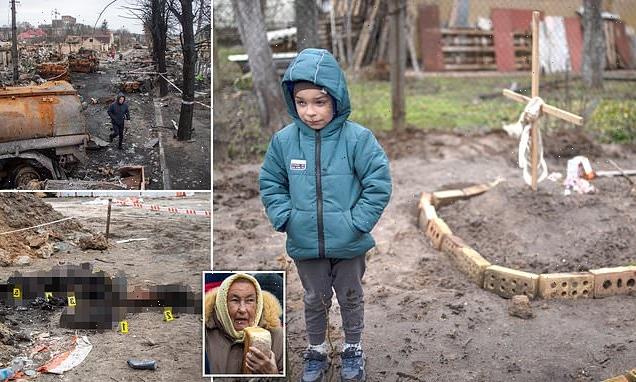 It was once a tree-lined idyll… now all you see is destruction: RICHARD PENDLEBURY sees the grim evidence of Russian slaughter in Bucha

As we watch, she is lifted and carried by a policeman to where the others lie.

He is able to do this with one hand because the woman – it was probably a woman – is now only a head, an arm and half a torso, still delicately attached, and charred to the bone.

The daylight seems to be fading but it is still early afternoon. Piercingly cold.

Under a slender oak tree on the edge of Lisova Bucha (Bucha Forest), once a Kyiv commuter idyll, we are confronted by a grotesque jumble of human remains.

One victim looks as if he had been trying to crawl from his funeral pyre. Certainly what is left of his face wears a grimace of determination.

No doubt it is a trick of the heat that was meant to destroy this evidence of civilian murder by the Russian military.

The town of Bucha continues to give up new horrors that revolt much of the world – and are promptly denied by Moscow as a sham.

But on the ground it is hard to view Bucha as anything other than one vast war-crime scene. 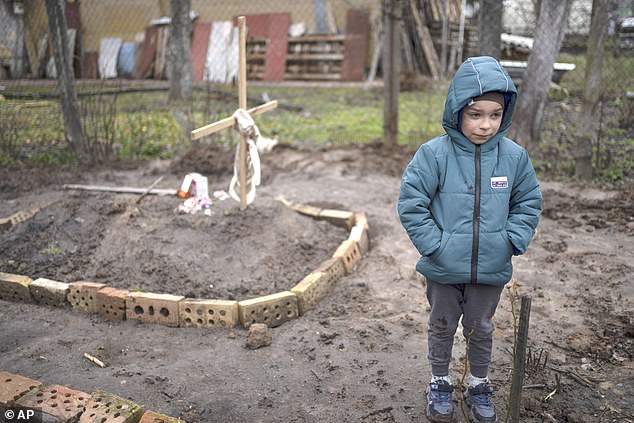 In the courtyard of their house, Vlad Tanyuk, 6, stands near the grave of his mother Ira Tanyuk, who died because of starvation and stress due to the war, on the outskirts of Kyiv

Named: ‘The Butcher of Bucha’

This is the Russian commander accused of orchestrating heinous war crimes in Bucha.

Lieutenant Colonel Azatbek Omurbekov has been branded the ‘Butcher of Bucha’ over the mass slaughter of civilians in the Kyiv commuter town.

Omurbekov was blessed by a Russian Orthodox priest in November.

As Ukraine said troops behind the atrocities could already be back on the front line, one report suggested they could be sent to areas which left them ‘no chance of surviving’ to stop them testifying at war crimes trials. 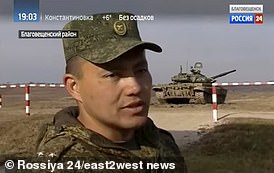 Our journey begins in central Kyiv and at first you appreciate the attraction of its now infamous satellite community.

Bucha has a charming setting; beyond the Irpin River, amid birch woods and rolling vistas of agricultural land and stands of firs along the horizon.

Kyivans who moved there no doubt felt they had escaped the mega-city – among the ten largest in Europe – with all its cares, its grime and irritations.

Instead they made themselves horribly vulnerable to Vladimir Putin’s military adventure.

On the outskirts the vegetation has been burned long before harvest. Myriad tank tracks criss-cross a ploughed field below the road. Putin’s crop circles.

We reach a low-rise neighbourhood. Every house has been smashed and burned. A man is walking a dog that looks like a chihuahua. Incongruous.

A woman is wheeling a suitcase as if intending to leave. Less so. The Intersport megastore has been reduced to ashes.

We pass shelled apartment blocks with curtains flapping in the breeze through smashed windows – a sight commonplace in Ukraine now – and war-battered avenues of pleasant housing amid trees.

In side roads, cars used as barricades are now bullet-riddled or smashed.

We reach a ruined shopping parade where civilians – mostly pensioners – have formed a queue.

They are waiting for the rumoured arrival of humanitarian aid. One of them is Sasha, a florist who didn’t always distrust Russians because she once trained as a ballerina in Moscow.

Now she is a nerve-shattered woman of late middle-age with shabby clothes and dirty fingernails.

A woman who has survived an ordeal. ‘I have been here for the whole of the occupation,’ she tells me and she starts to cry.

‘We had to bury a civilian volunteer in the backyard of our apartment building. He had been foraging food for us when he was shot dead by a sniper.

‘The Russians also came to my neighbour. They stole all her appliances and took all the males in her family to a basement where they made them undress and beat them. The Russians were saying that they wanted our weapons. That they knew every home had a weapon. But such weapons are illegal here!

‘My neighbour’s husband had a heart attack during the occupation and died. We also buried him in the yard. Four of my family left Bucha after that but I stayed here because of [my widowed neighbour] and my four dogs. I was taking heart tablets every day for the stress of it.’ 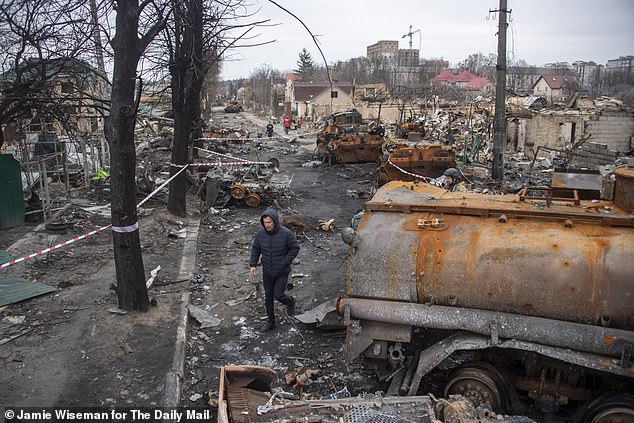 Sasha had no electricity or heating but ‘a grocery store was bombarded and after that the owner said we could take our pick’, she says.

‘I asked the Russians: “Why did you destroy the maternity hospital in Mariupol?” And they said “That was the Ukrainians who did it. We have come to save you!” Save us? They are worse than fascists!’

She adds: ‘Bucha was lovely here before the war. A relaxing place, even in Soviet times. I am still afraid the Russians will return. I would not survive another occupation.’

I ask her what her favourite ballet is. Her expression softens, she smiles and says ‘Giselle’.

Then she gives me a hug and says that talking about what happened here makes her feel a little better.

Vladislava, 50, is also waiting here with her daughter Nastya, aged ten. ‘The Russian checkpoints were a gamble,’ she says.

‘One time they would let you through, the next shoot without reason. Crazy.’

There is a scrum of hungry, exhausted people and conversations are forgotten.

I notice that an old lady – who, for some reason, has brought a dustpan brush in a cardboard box on a trolley – has secured a bag of madeleines.

She has waited for two hours for this success. Such is life in Bucha in the aftermath of the Russian occupation.

We carry on to Vokzalna Street. It is a totemic scene of destruction, both of Russian military hardware and Ukrainian lives and property. 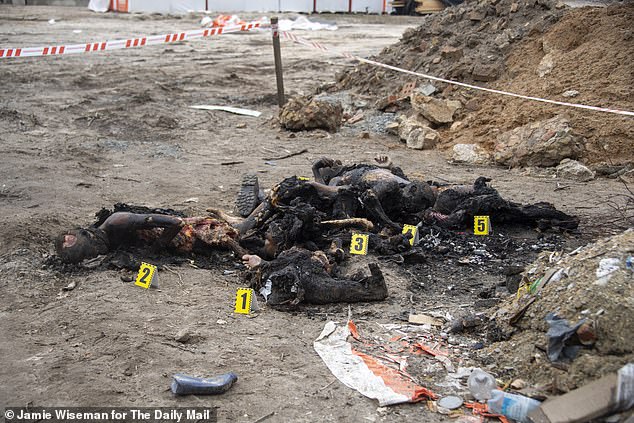 Devastation: A pile of massacred civilian bodies is presented to journalists visiting the Kyiv satellite town of Bucha

When the bridge over the Irpin River was blown up – by the defenders to stop the advance on Kyiv – a Russian armoured column was halted here and then destroyed piecemeal from the air, by drone and artillery.

The street and adjoining properties are a junkyard of burned and ruined vehicles.

One armoured personnel carrier sits on its side in a garden. Another has been blown on top of a third.

All of them have had their turrets lifted off and on to the road, like hats flung skywards at an old political meeting.

A heavy machine gun is resting against a tree, having been torn from a tank on the roadway that is covered in congealed oil, melted metal, caterpillar tracks, snapped branches and ragged uniforms.

One has to pick a path through the cog wheels, engine blocks, fuel tanks, rubber hoses and fallen telephone wires like jungle vines.

One of the wrecks has a tree trunk tied to its flank, presumably for extra protection. No good.

The armour has been peeled open from above, like a sardine tin. In the back of another iron coffin are two ration boxes which say ‘Army of Russia’ and ‘Not for Sale’.

There is a Russian soldier’s boot on a grass verge. His foot is still inside.

The cottages, villas and chalets that line the road have all been damaged or destroyed by battle.

Yet there is life here. A cock is crowing from a garden. Magpies scold in a tree in which the drive wheel of a tank now hangs from a branch.

And there are some dazed residents. Outside Number 19a, the householder is explaining: ‘I had to stay in the city because I have elderly parents. ‘When this fight happened we had to stay on the floor, face down with the doors and windows falling on top of us. When Russians left we found 15 [civilian] bodies in the vicinity.’

Another man, restraining a huge Alsatian, recalls: ‘I was shot in the buttock but at the moment I was hit I was already falling and that saved me.’ 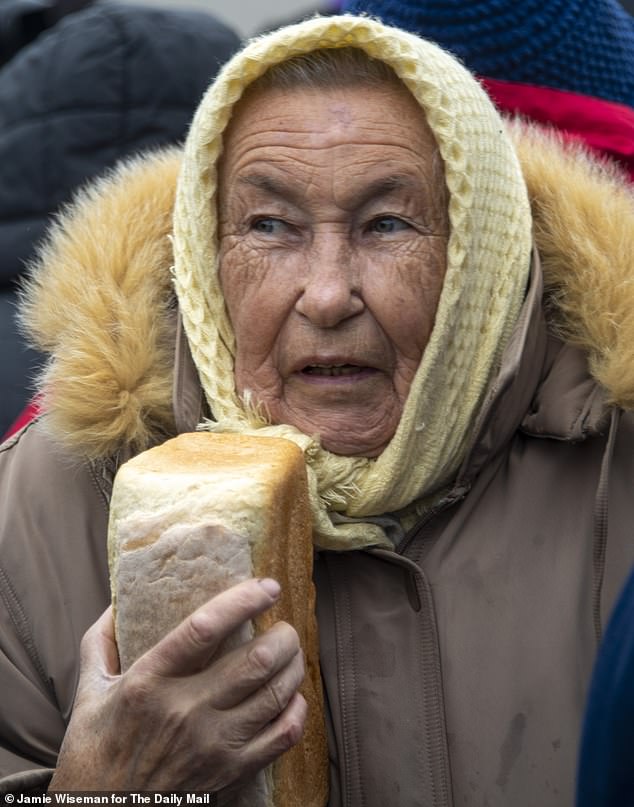 On the paling fence outside No 31 there is scrawled: ‘People inside.’

Were they alive or dead? They are very much dead, those people under the oak tree in the sylvan suburb of Lisova Bucha.

There are six bodies, four women and two men, all from one family, we are told – though they have yet to be formally identified.

They had been shot, then doused with petrol and burnt, it is claimed.

Locals say they had been executed by Russian soldiers while looking for food. Whatever happened, the aftermath is terrible to behold.

One victim lies on his back, arms wide. His skin is taut and pale caramel like a mannequin.

One can tell it is a male because the fire had burned off his clothes, exposing his genitalia.

We watch as policemen begin to lift the cadavers into body bags. Some disintegrate.

It is undignified, revolting. ‘Alas, there is a lot of such crimes in Kyiv region,’ says the police spokesman under the oak tree.