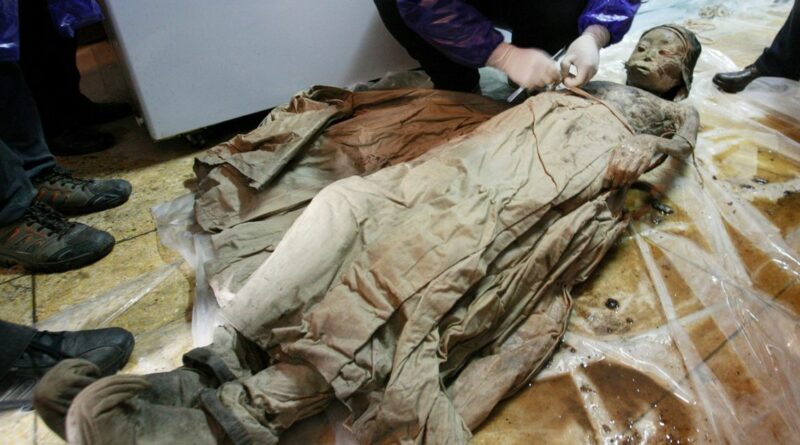 The skin of a mummy discovered by accident had been perfectly preserved over 700 years.

Road workers stumbled upon a jaw-dropping corpse belonging to a high-ranking woman from China's Ming Dynasty.

News of the remarkable archaeological breakthrough on in the city of Taizhou, in eastern China on March 1 2011 was first broken to the world's press a decade ago.

A team expanding a street in the Jiangsu Province dug up by chance two wooden tombs believed to date back to China's ruling power between 1368 and 1644.

Just six-and-a-half feet below the road surface was the woman whose features shoes and ring all remained in tact and showing hardly any signs of deterioration.

Chinese archaeologists were immediately called from the nearby Museum of Taizhou to inspect the body and were stunned by the condition of almost everything from the woman's skin and hair right down to her eyelashes.

Experts claimed it was as though the diminutive 4'9 woman found swamped in a mysterious brown liquid, had only died recently.

Taizhou was reportedly buzzing off the discovery which included a ring still fixed on a finger belonging to the long dead woman.

Researchers said what she was clothed in on her death married up with the traditional costume of the Ming dynasty, as did various ceramics, ancient writings and other relics inside her coffin.

Oddly bones which did not belong to the corpse were also buried with her.

It was the first discovery of a mummy in the region for three years and the sixth since 1979.

Previous findings sparked an interest in learning how corpses remained so well preserved from the Ming Dynasty and what rituals were involved in the mummification process.

Director of the Museum of Taizhou, Wang Weiyin, explained mummy tended to be clad in silk and a little cotton but both are difficult to keep in a good condition.

The Museum of Taizhou opened off the back of the first finding of the Ming Dynasty in May 1979.

Sadly it took decades after for archaeologists to develop the skills to keep mummies well preserved, as such early findings amounted to only clothing, belts and clamps.

The Ming Dynasty was responsible for building the Forbidden City and restoring the Great Wall. It was also the last in China and brought about an era of economic growth and cultural splendour which kickstarted trading with the West.