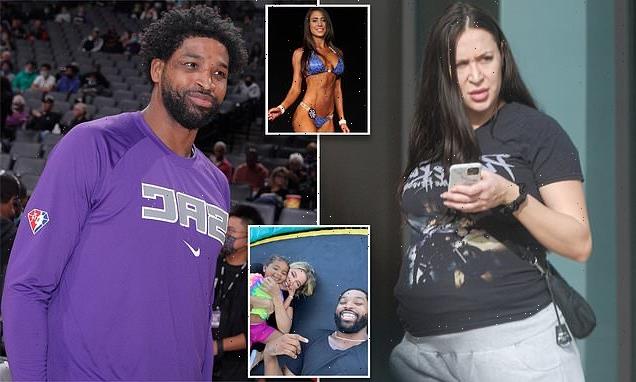 Personal trainer Maralee Nichols, who is suing womanizing basketball star Tristan Thompson for child support, has given birth to a baby boy.

DailyMail.com exclusively revealed on Friday that the Sacramento Kings star was set to become a father for the third time following an alleged fling with 31-year-old Nichols.

At one point, Thompson insisted his personal trainer lover get an abortion and offered her $75,000 in hush money after she fell pregnant while he was still dating Khloe Kardashian, court filings claim.

According to bombshell documents obtained by DailyMail.com, the baby was conceived in Houston, Texas, during Thompson’s 30th birthday celebrations in March, when he was dating Khloe, with whom he shares a three-year-old daughter.

Nichols, a Houston native, has since moved to Los Angeles and is now suing the athlete for child support as well as for reimbursement of medical expenses and pregnancy-related costs.

She has also filed to submit text messages between her and Thompson as evidence for her paternity lawsuit which allegedly show that he wanted her to terminate the pregnancy, Page Six reported.

Attorneys for Nichols claim that the communications show Thompson ‘addressing the parties’ relationship’ and ‘insisting that she get an abortion and threatening that she will get next to nothing with lesser support requirements in Texas.’

In a copy of a shocking text message obtained by Radar, Thompson allegedly offers Nichols $75,000 to keep quiet and warns that he is retiring after this NBA season and would therefore be unemployed.

He also makes it clear that he has no plans to be involved in the child’s life. 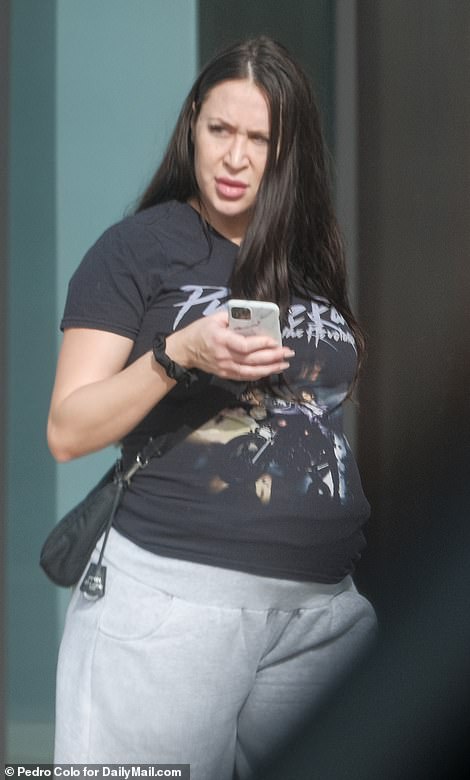 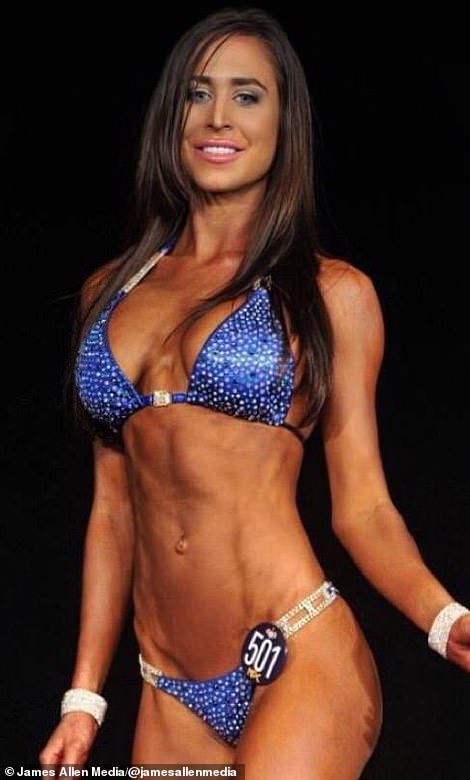 The heavily pregnant 31-year-old was seen flaunting her baby bump in Los Angeles in late November. She previously competed in body building, according to social media 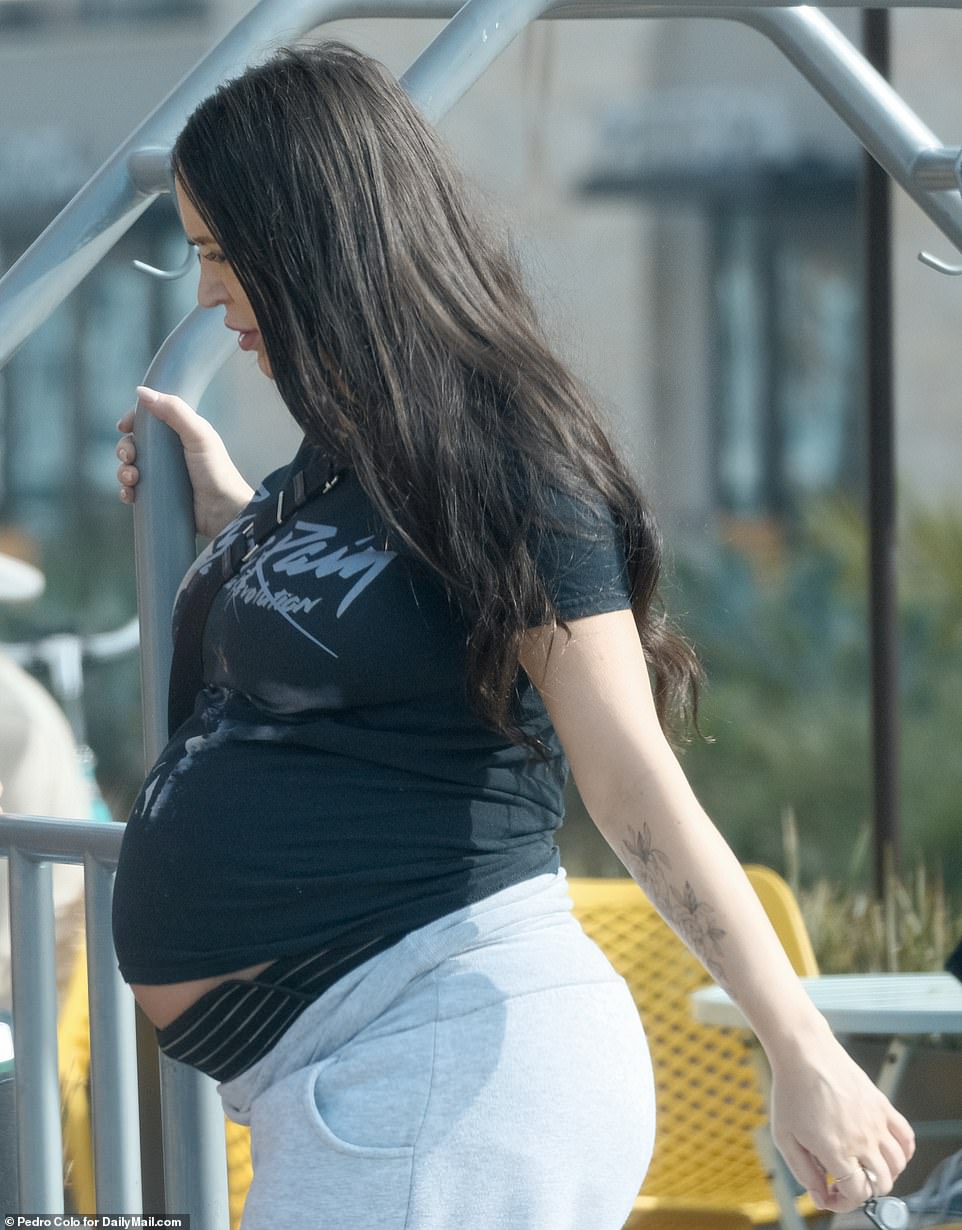 The Houston native has since moved to Los Angeles and is now suing the Sacramento Kings star for child support. She is due to give birth to a baby boy on December 3 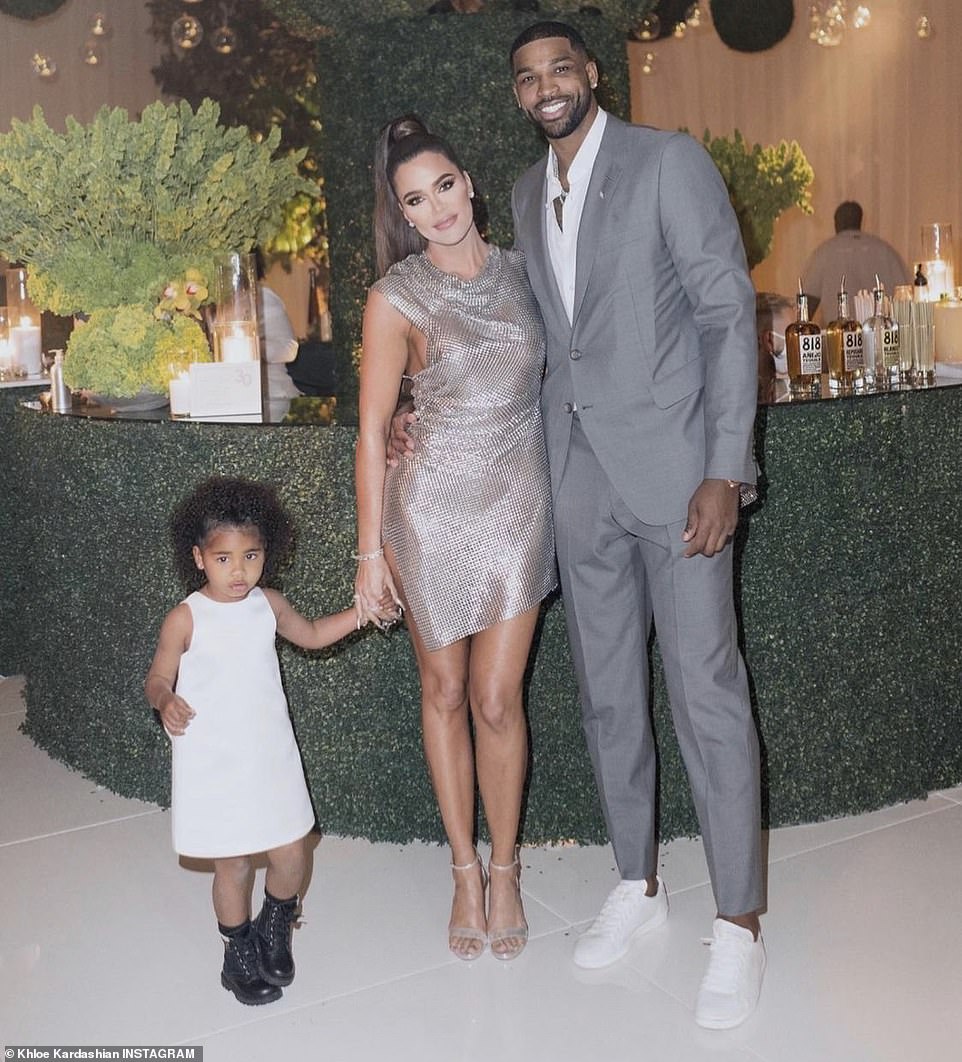 Bombshell court papers obtained by DailyMail.com claim the baby was conceived in Houston during Thompson’s 30th birthday celebrations in March – when he was still dating Khloe Kardashian, the mother of his four-year-old daughter True. The couple are seen during his birthday bash earlier this year

‘You know how I feel. My feelings haven’t changed at all. Won’t be involved at all. Btw if you think having this baby is gonna make you some money. It’s completely wrong,’ the text message allegedly sent by Thompson reads.

‘You are aware that I’m retiring after this season. So in terms of support it will be whatever is required monthly or someone who’s unemployed. It’s texas (sic) so it will be only a couple hundred dollars. So you better off taking this 75k I’m offering cause you won’t get nothing near that with having a kid with a father who’s unemployed.’ 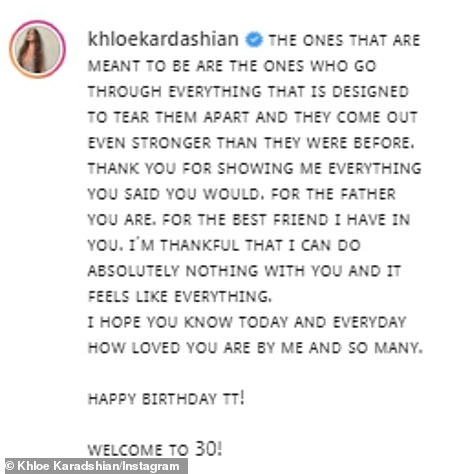 Khloé shared a heartfelt post for the father of her only child at the time: ‘Thank you for showing me everything you said you would. For the father you are. For the best friend I have in you. I’m thankful that I can do absolutely nothing with you and it feels like everything. ‘I hope you know today and everyday how loved you are by me and so many’

According to the filing, Thompson denied sending the messages but also claims his ‘contact information is present’ in them.

Seen in exclusive DailyMail.com photos, the heavily pregnant 31-year-old – described as a former friend of Thompson’s – is due to give birth to her baby boy on December 3.

In a declaration included in paternity suit, Thompson acknowledges having sex with Nichols several times at a hotel after the pair attended a party together.

The 30-year-old described in the documents how Nichols drove him to the event in her Maserati sportscar before returning to his hotel where she had ‘a special birthday surprise’ for him – which he admitted he knew would be sex.

Thompson claims that night was the only time he was intimate with Nichols – a version of events that is hotly disputed by her lawyers, who say the affair began at least ‘five months’ before his 30th birthday celebrations, involved Nichols traveling to California on multiple occasions, and continued after she got pregnant.

He said: ‘When we got to my hotel room, we immediately had sexual intercourse. Petitioner [Nichols] initiated our sexual contact and never objected to our having sexual intercourse. She was very awake and conscious and did not exhibit any signs that she was other than a willing participant in our sexual activities. 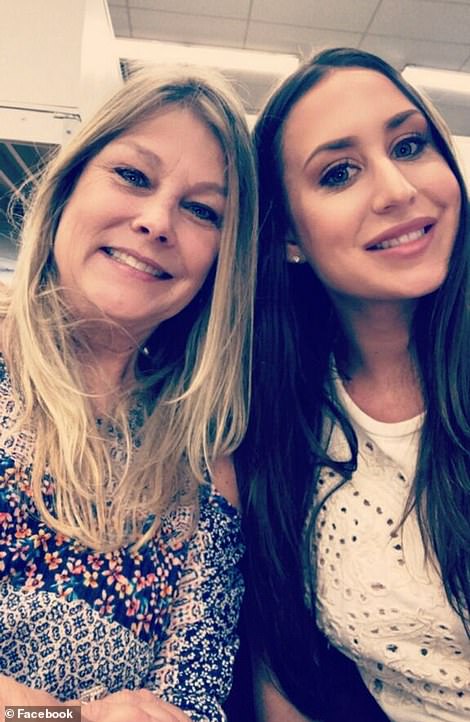 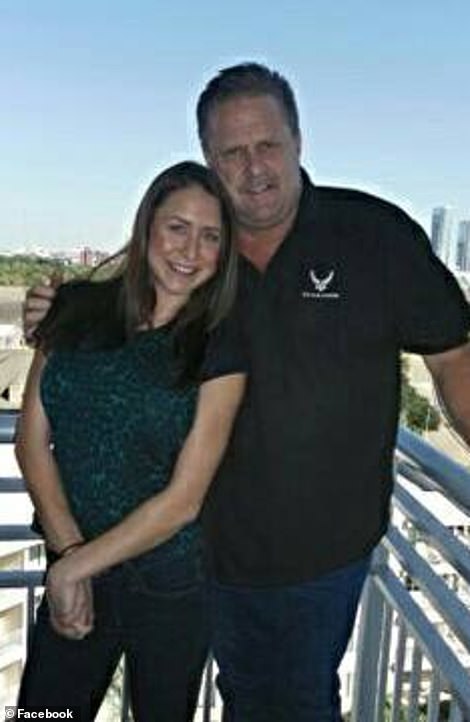 Nichols, who has been described as a former friend of Thompson’s, is a Houston native but has since moved to LA. She is pictured above with her parents 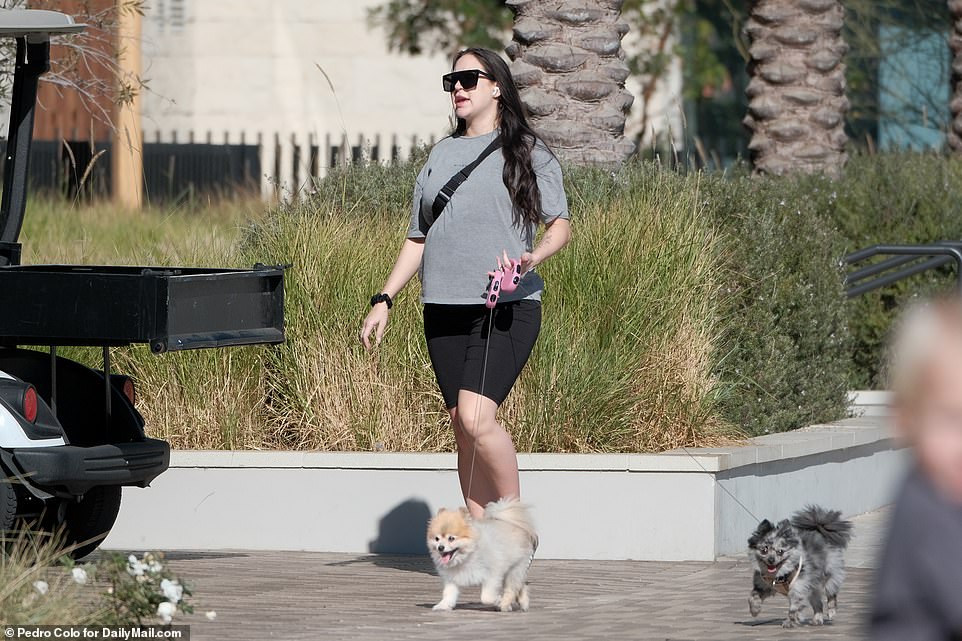 Nichols launched her paternity suit on June 30 in Los Angeles, shortly after relocating from Texas, requesting child support as well as reimbursement of medical expenses and pregnancy-related costs such as Lamaze classes, a doula, and prenatal vitamins 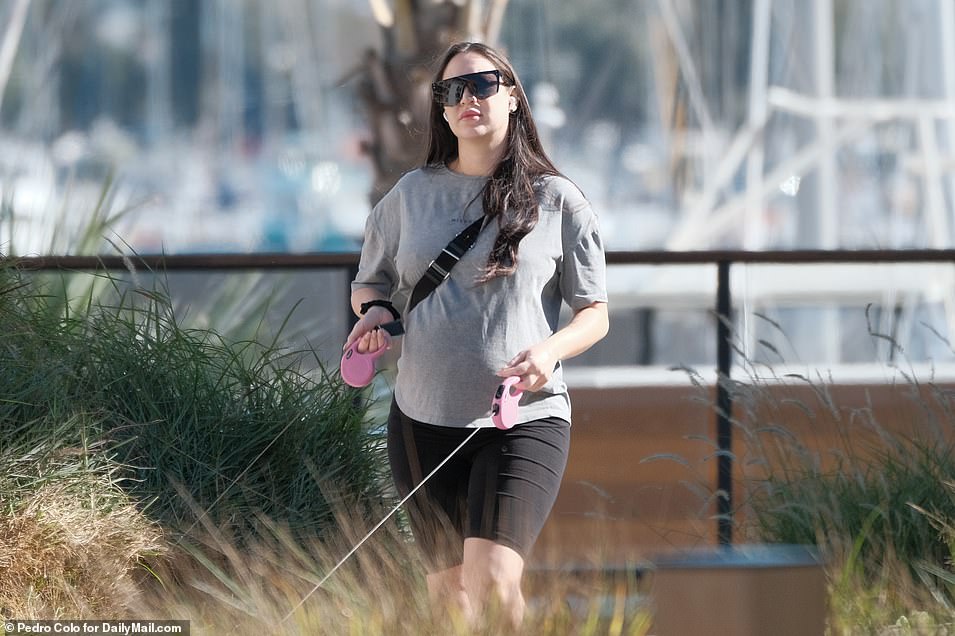 ‘We did not drink at my hotel room and Petitioner was not drunk. After we had sexual intercourse, Petitioner specifically asked me if she could spend the night because it was my ‘special birthday’ as she called it.

‘I told her I had to get up early in the morning but she said it would not be an issue for her. After we had sexual intercourse, we went to bed.

‘We were both naked sleeping with one another. Before I left the hotel, we had sexual intercourse again in the morning.’

At the time, the Canadian basketball star was still dating ex-girlfriend Khloe Kardashian, 37 – the mother of his three-year-old daughter, True – and had celebrated his milestone birthday with her days earlier.

The reality star confirmed the two were back together following their February 2019 split after his three, highly-publicized cheating scandals, with a sentimental Instagram post on the day of his birthday, March 13.

‘The ones that are meant to be are the ones who go through everything that is designed to tear them apart and they come out even stronger than they were before,’ Khloé wrote alongside a photo of the couple and their family.

‘Thank you for showing me everything you said you would. For the father you are. For the best friend I have in you. I’m thankful that I can do absolutely nothing with you and it feels like everything.’

Khloe is also mentioned in his statement, which was signed off on August 5, and is referred to as Thompson’s ‘ex-girlfriend’ and the mother of his child.

The sports star and his legal team did not respond to a request for comment from DailyMail.com. 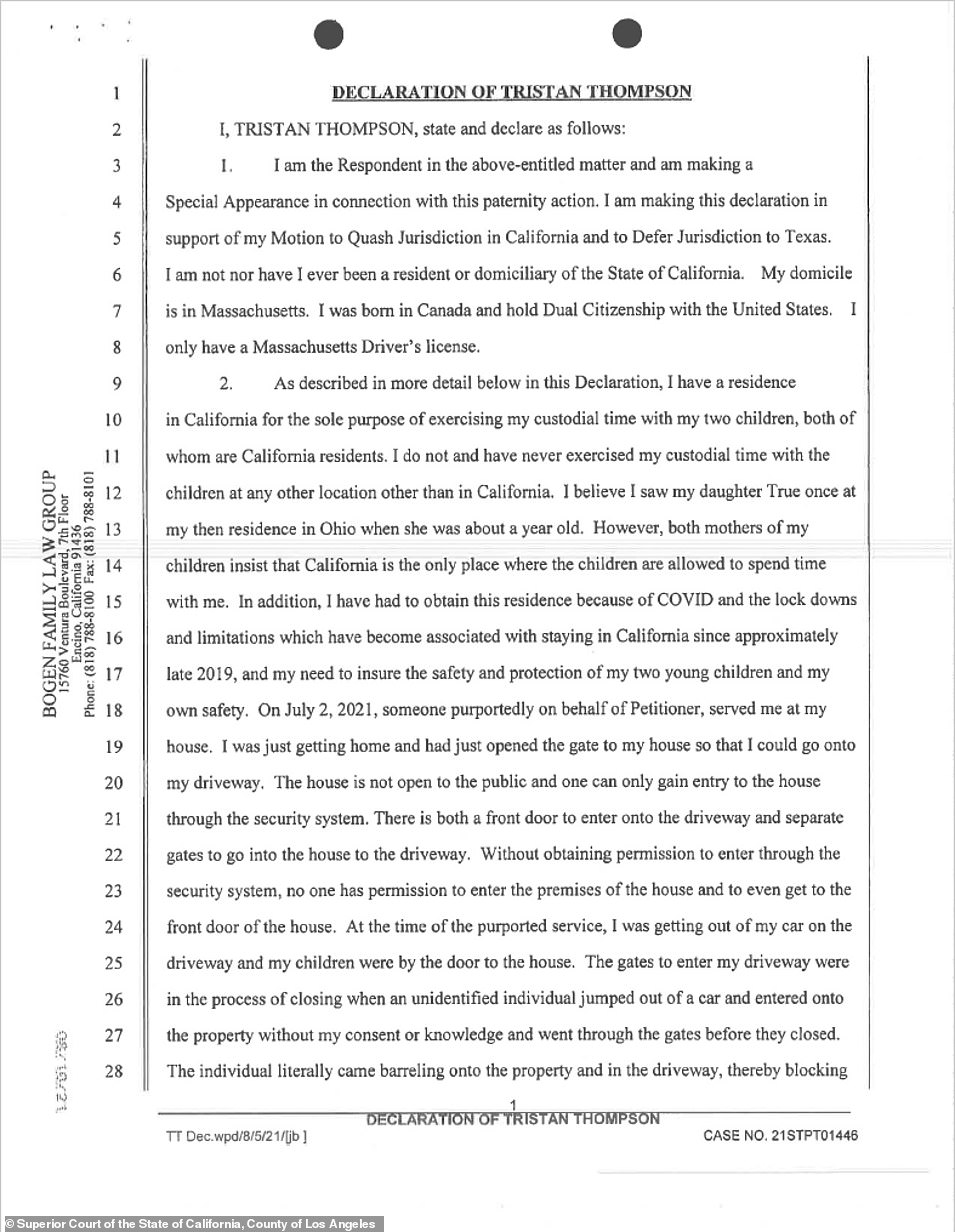 In his declaration to the court in August, Thompson insisted he and Nichols had sexual intercourse only twice during their encounter 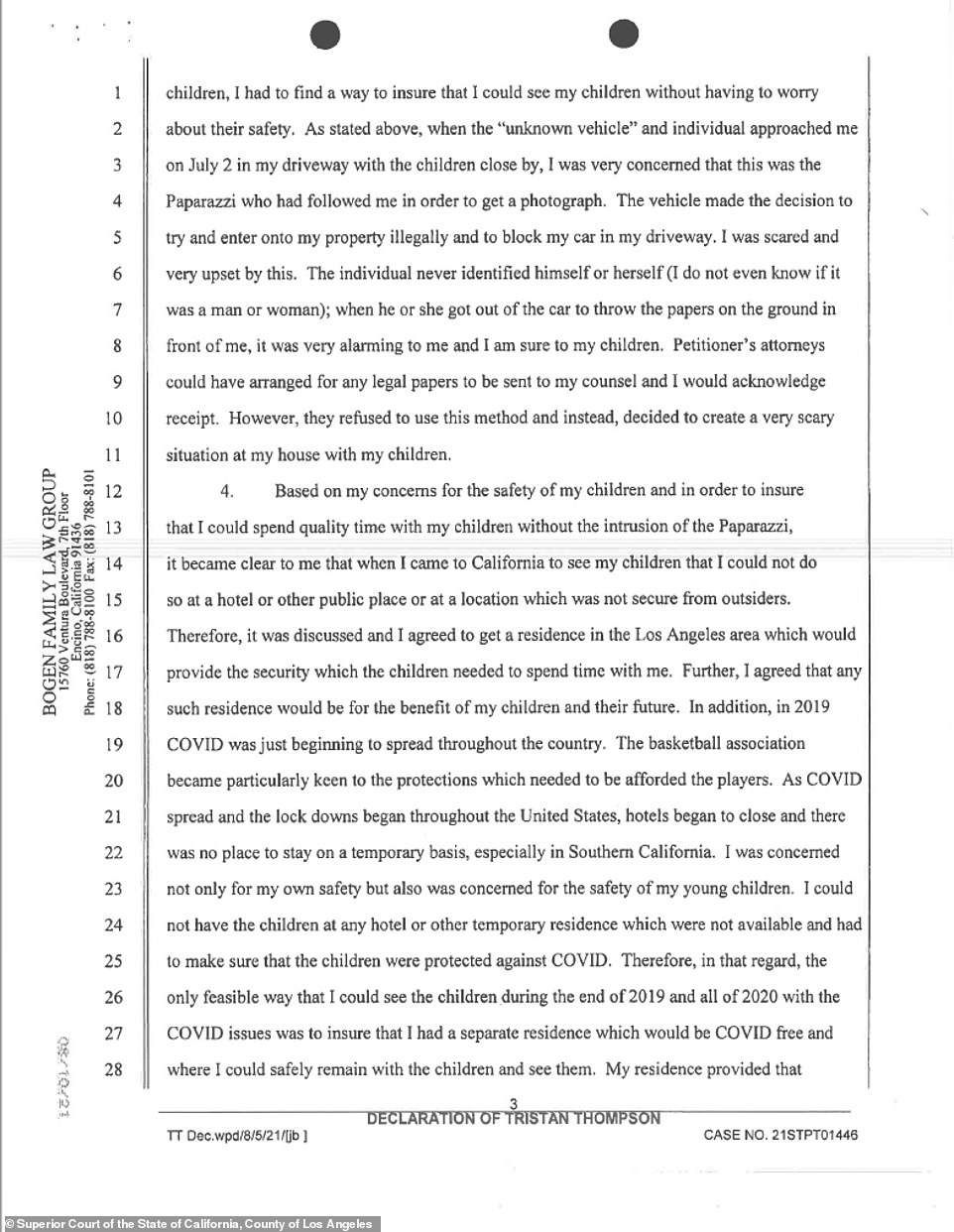 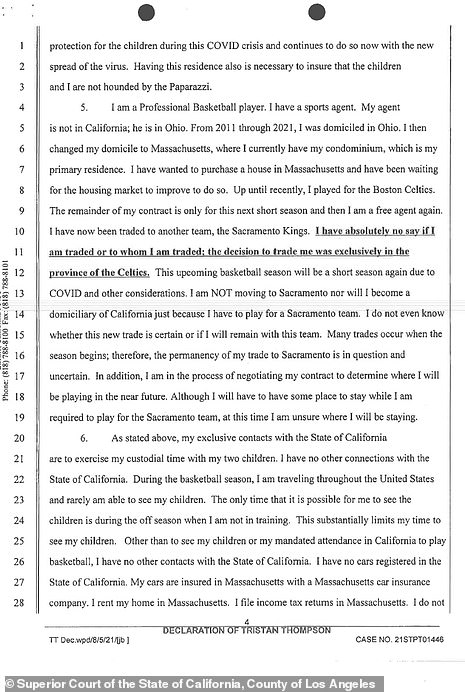 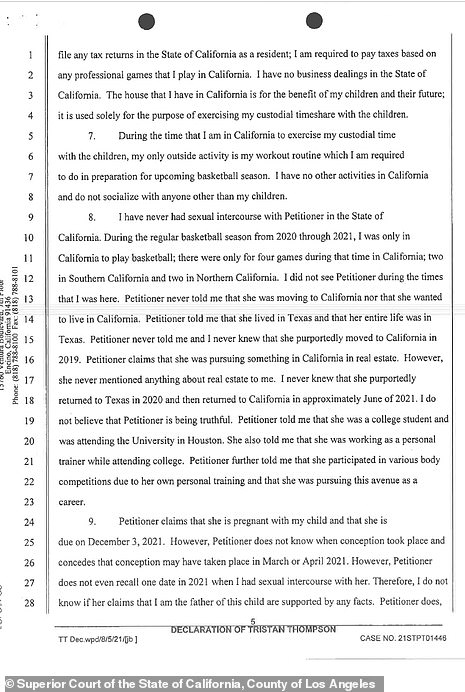 Despite owning a house in the LA suburb of Encino, Thompson claims he only has the home for the purpose of seeing his other children and to prevent them ‘being hounded by the paparazzi’ 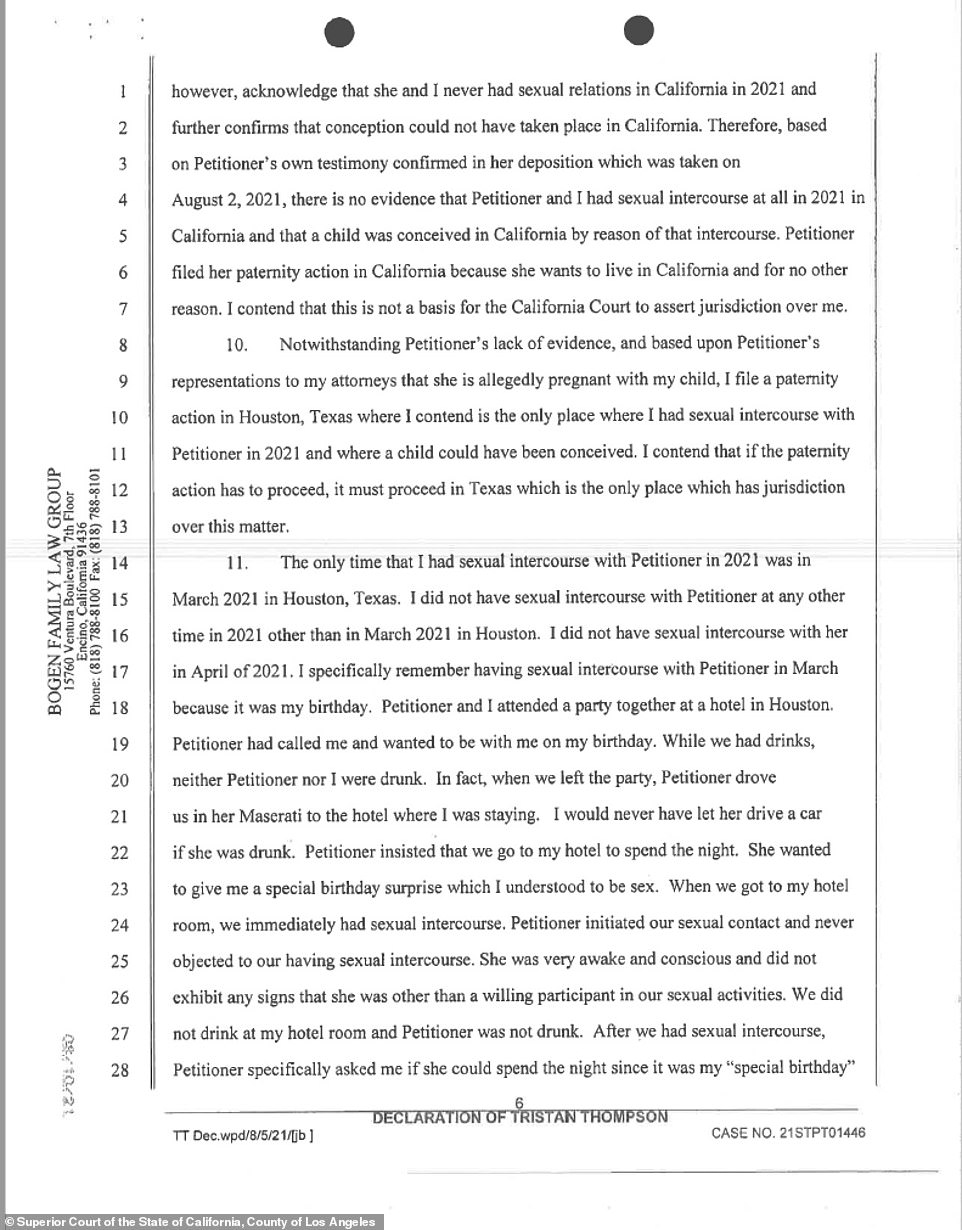 Humiliated Khloe dumped the serial cheater in July after DailyMail.com exclusively revealed that the athlete had been seen entering a room with three women during a wild Beverly Hills party before emerging ‘disheveled’ 30 minutes later.

Days before, the mom-of-one had used a Keeping Up With The Kardashians reunion show to tell of how she had learned to trust womanizer Thompson again.

She said: ‘I mean, I definitely trust him as a friend and all those things… What I need to find out, everything comes my way. I just need to trust and focus on today and go day by day. I can’t worry too much about everything else.

‘I know the growth and the work that he’s done. I know all the help that he’s got, and the constant efforts that he makes every single day, and how hard he fought to get back with me currently.

‘I don’t understand why someone would go through all that if they weren’t really serious.’

But DailyMail.com can reveal that Nichols was already pregnant with Thompson’s alleged baby when Khloe made the comments – and that she was already suing the love cheat for child support.

In the papers, Nichols asks for child support as well as reimbursement of medical expenses and pregnancy-related costs such as Lamaze classes, a doula, and prenatal vitamins. 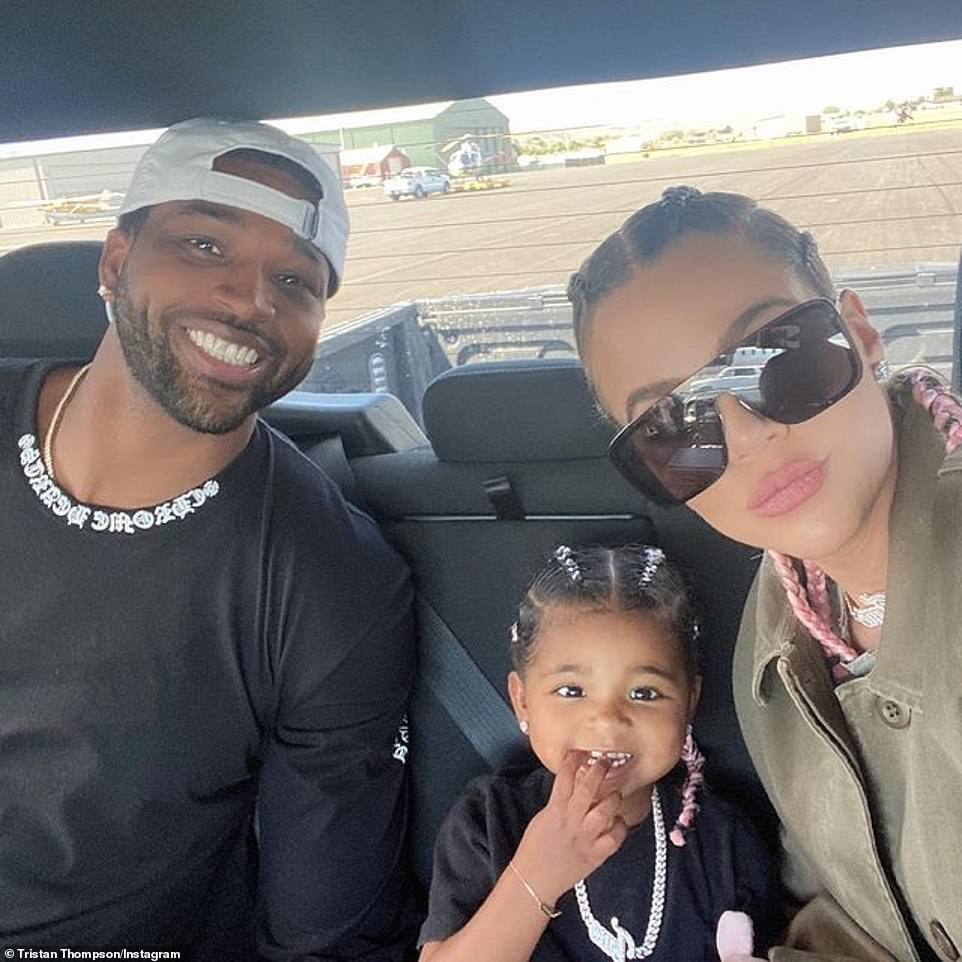 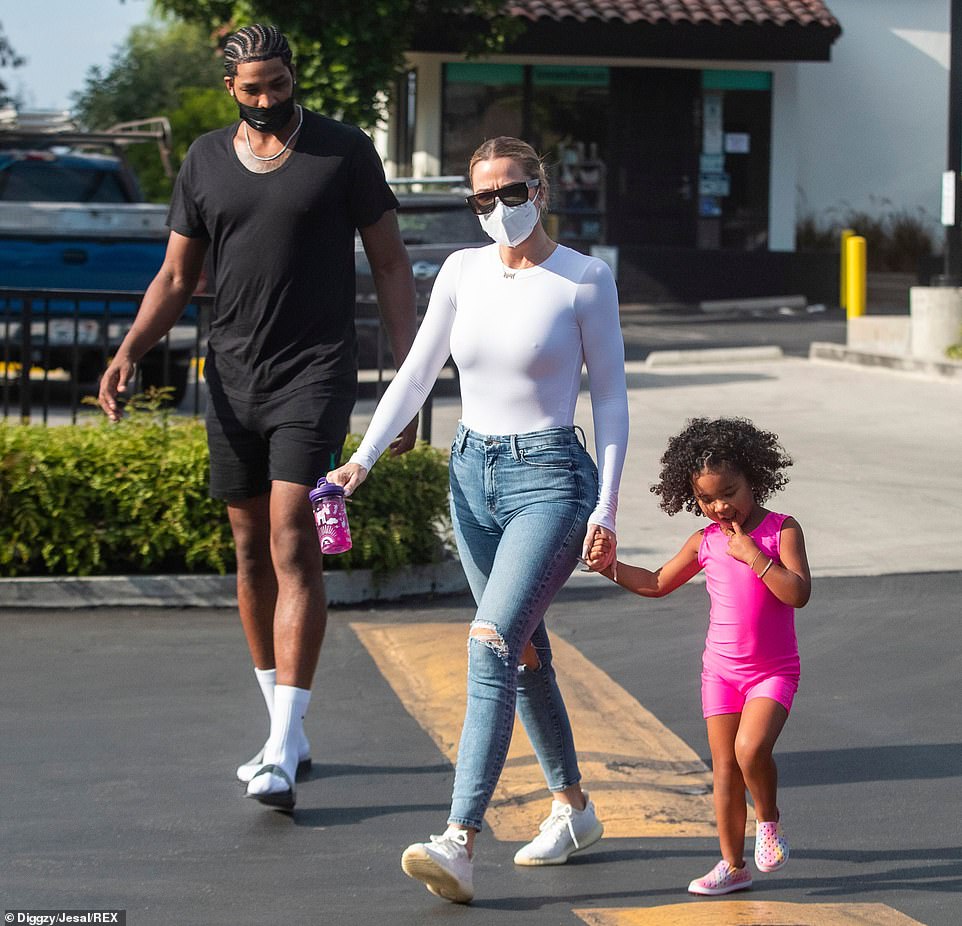 Khloe is also mentioned in his statement, which was signed off on August 5, and is referred to as Thompson’s ‘ex-girlfriend’ and the mother of his child 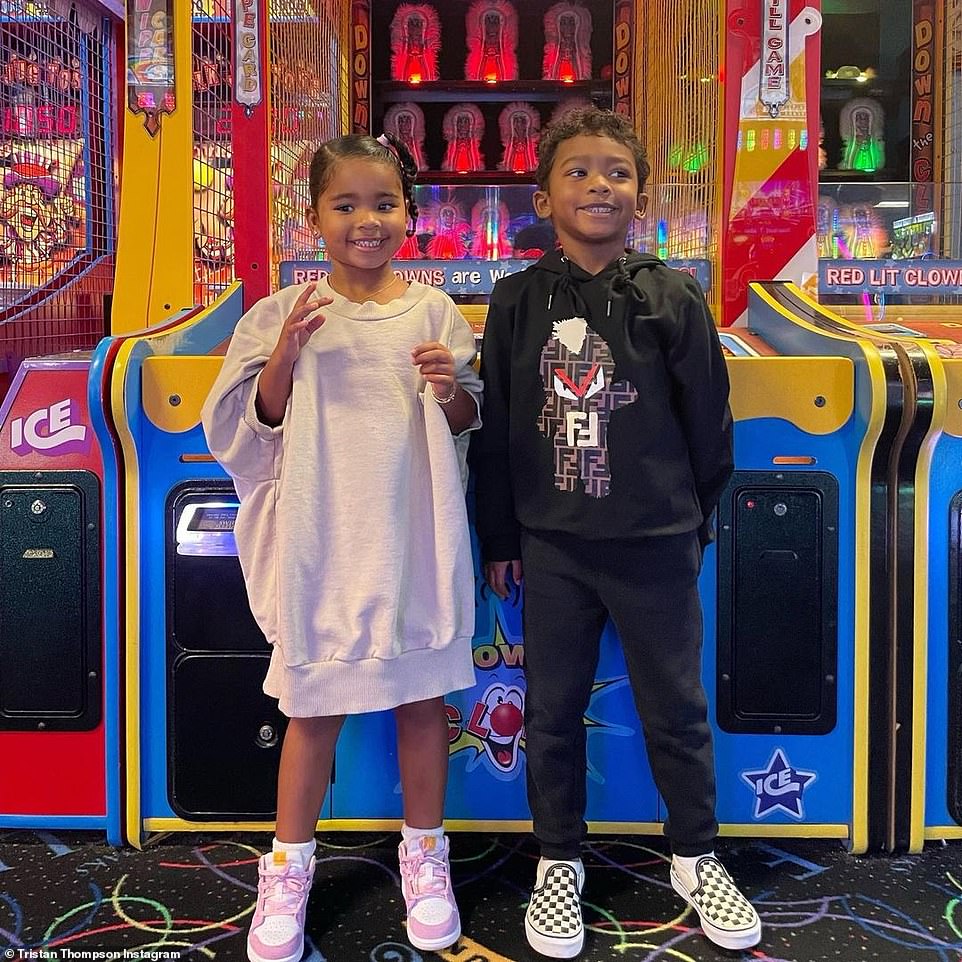 Fatherhood: Tristan Thompson had his family man persona on full display as he shared sweet shots of his and Khloe Kardashian’s daughter True, three, and his four-year-old son Prince to Instagram last month

She also wants Thompson to foot the bill for the baby boy’s costs such as newborn clothing, formula, and diapers.

Thompson wants the case moved to Texas to limit the amount of child support Nichols can be awarded but has not expressly denied that he could be the baby’s father, although he is insisting on a paternity test once the little boy is born.

He is also fighting Nichols over whether the California court system has jurisdiction, insisting she was a resident of Texas at the time of conception and accuses her of ‘venue shopping’.

Despite owning a house in the LA suburb of Encino, Thompson claims he only has the home for the purpose of seeing his other children and to prevent them ‘being hounded by the paparazzi’. 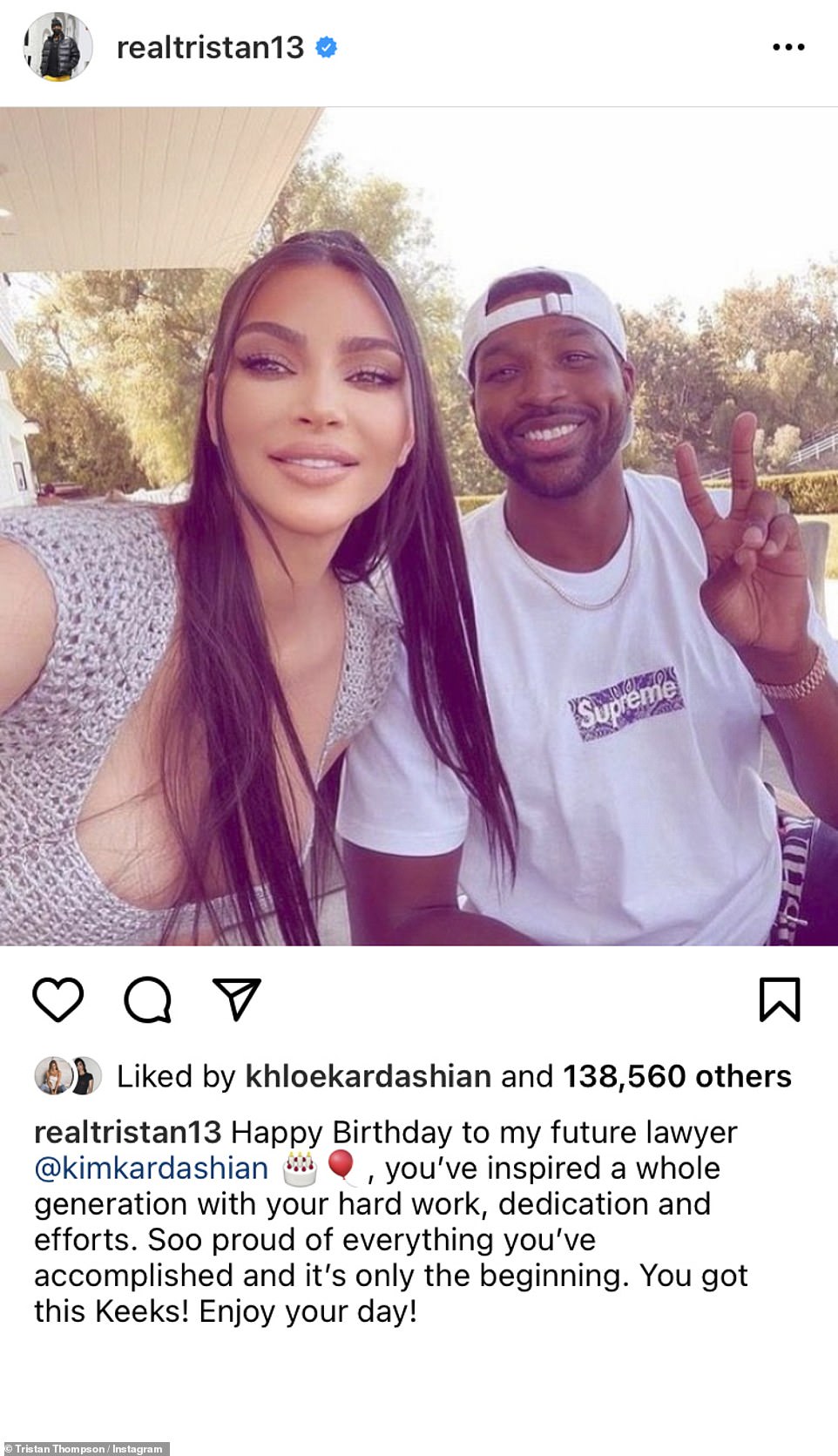 Though Tristan and Khloe have had a rocky relationship due to his cheating, it appeared the Sacramento Kings star had reconciled with her and the rest of the Kardashian clan when he penned a heartfelt birthday message to the Revenge Body host’s older sister Kim 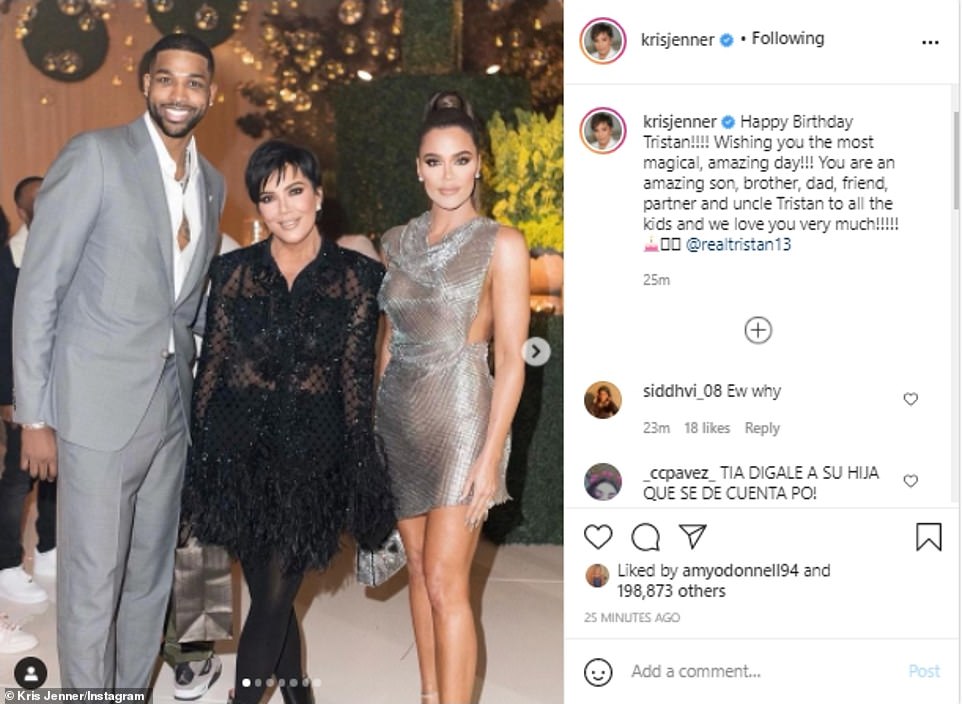 Although he was traded to the Sacramento Kings earlier this year, Thompson also says he is resident and pays taxes in Massachusetts – the home of his former team the Boston Celtics.

He said he will not be moving to Sacramento, despite signing for the Kings, and had no choice about being traded to the team.

Thompson is also complaining about the way court papers were served on him, claiming Nichols’ legal team had been ‘lying in wait’ and ‘slipped through the gates’ of his Encino home in front of his children to hand over the documents.