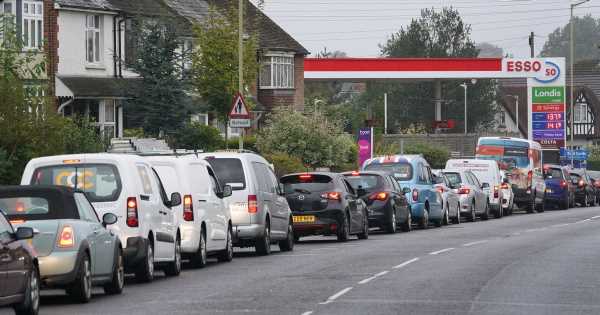 The British government says military tanker drivers will start delivering fuel to gas stations from Monday as the crisis escalates.

Almost 200 military personnel – including 100 drivers – have been undertaking training at haulier sites and will start deliveries to help relieve the situation.

Despite this the government insists the situation is stabilising.

The government also announced that a temporary visa scheme for foreign HGV drivers that was due to expire on Christmas Eve will now be extended to the end of February.

There had been criticism of the attractiveness to drivers of its length. Now 300 fuel drivers will be able to come to the UK from overseas immediately under a bespoke temporary visa which will last until March.

Defence Secretary Ben Wallace said: "Across the weekend over 200 military personnel will have been mobilised as part of Operation Escalin.

"While the situation is stabilising, our armed forces are there to fill in any critical vacancies and help keep the country on the move by supporting the industry to deliver fuel to forecourts."

The temporary visa scheme was announced last week as panic buying hit filling stations across the UK, with a shortage of HGV drivers having affected supplies of petrol and diesel.

The panic buying has led to empty forecourts across the country, while ministers are said to be bracing themselves for months of energy chaos, fuel shortages and empty food shelves.

As well as foreign drivers, 5,500 poultry workers will also be allowed in to help keep supermarket shelves stocked with turkeys before Christmas.

Business Secretary Kwasi Kwarteng said: "Thanks to the immense efforts of industry over the past week, we are seeing continued signs that the situation at the pumps is slowly improving.

"UK forecourt stock levels are trending up, deliveries of fuel to forecourts are above normal levels, and fuel demand is stabilising.

"It's important to stress there is no national shortage of fuel in the UK, and people should continue to buy fuel as normal. The sooner we return to our normal buying habits, the sooner we can return to normal."