Home » World News » Pfizer boosters are recommended for many Americans, and Alaska faces its worst surge: The week in Covid news. 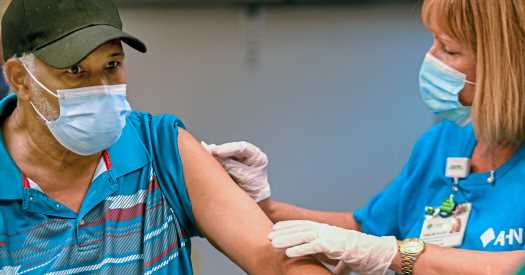 Millions of Americans became eligible for booster shots of the Pfizer-BioNTech coronavirus vaccine this week, after federal regulators recommended it for people inoculated with that vaccine more than six months ago and who fall into one of three categories: over 65; having underlying medical conditions; or working that put them at risk for infections.

Whether to include that last category was hotly debated among regulators.

On Wednesday, the Federal Drug Administration recommended booster shots for Americans in all three categories. But the following day, the Centers for Disease Control’s advisory committee on immunization practices issued its own recommendations, which excluded frontline workers.

On Friday, the C.D.C. director, Dr. Rochelle P. Walensky, overruled her agency’s advisers and said frontline workers should be able to get the booster shots. “This was a scientific close call,” she said told reporters at a White House briefing on Friday. “In that situation, it was my call to make.”

Dr. Walensky added that “it was a decision about providing rather than withholding access.”

President Biden on Friday welcomed Dr. Walensky’s decision and encouraged eligible people to get the booster shots. At the White House briefing, he also lamented that there were about the 70 million Americans who have chosen not to get vaccinated, and complained about what he called the “elected officials actively working to undermine with false information the fight against Covid-19.”

Here’s what else happened this week:

Pfizer-BioNTech announced on Monday that its vaccine had been shown to be safe and effective in low doses in children ages 5 to 11. If the F.D.A. authorizes the Pfizer vaccine for those ages, that could be a game changer for millions of American families and could help bolster the U.S. response to the highly contagious Delta variant. Vaccine uptake among older children has lagged and polling indicates that a significant number of parents have reservations about vaccinating their children.

A World Health Organization panel endorsed the use of a monoclonal antibody treatment for Covid patients at the greatest risk of being hospitalized or those who are not producing antibodies to fight off the disease. The expensive treatment, developed by the U.S. drug maker Regeneron and the Swiss biotech company Roche, has garnered attention as an alternative therapy for Covid-19, particularly among some who have shunned vaccines.

African public health experts on Thursday hailed Mr. Biden’s plan to expand global vaccine donations, but warned that his ambitious goals would not be met without timelier deliveries and greater transparency about the amount of doses sent. The continent, which has the lowest Covid-19 vaccination rate, has suffered not only from a shortage of doses but from delayed and inconsistent deliveries. African countries have still received only one-third of the doses they were promised for this year.

Two hosts of “The View” television show were directed to leave the set live on the air on Friday after both had apparently tested positive for the coronavirus. The hosts, Ana Navarro and Sunny Hostin, had been on the verge of introducing Vice President Kamala Harris for an in-person interview.