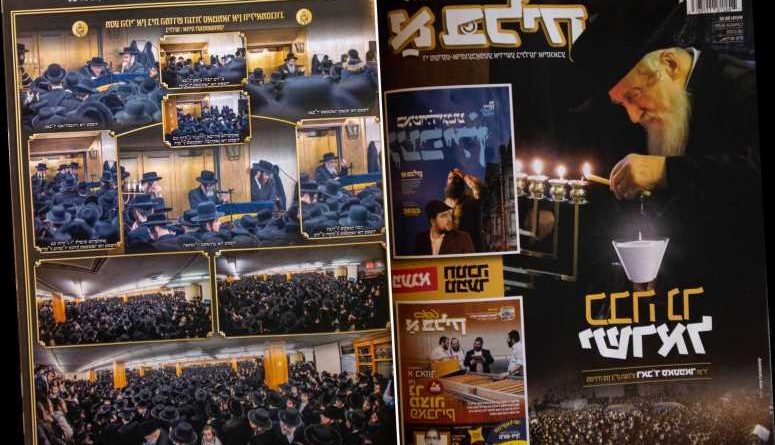 New photos obtained by The Post show thousands of maskless mourners jammed inside a Williamsburg synagogue for a funeral during the coronavirus pandemic.

The snaps show a crush of attendees inside the huge temple at 152 Rodney Street with room dividers removed to create more standing-room-only space. Bleachers used for major events were packed with men and boys. The images were published by a Yiddish magazine whose name roughly translates to “At a Glance.”

The crowd overflowed outside, where thousands more gathered around Congregation Yetev Lev D’Satmar and stretched into the distance down Williamsburg Avenue.

One observer estimated that close to 10,000 people congregated for the noon Dec. 7 memorial.

Mayor de Blasio has yet to act on the apparent COVID-19 violations.

“We’re still trying to get the full truth of what happened there,” de Blasio said on Dec. 8, a day after the funeral for Rabbi Yisroel Chaim Menashe Friedman, 94, the former chief Satmar judge.

Meanwhile, Rabbi Zalman Leib Teitelbaum, the leader of the Satmar sect in Williamsburg, was diagnosed with COVID-19 on Dec. 27 and was “showing mild symptoms” at his home in Williamsburg.

An Orthodox Jewish community member critical of the risky events said he doubts the synagogue will face any official consequences for violating state and city restrictions aimed at stemming the spread of COVID-19 as infections and hospitalizations rise citywide.

“It’s a farce. It’s laughably embarrassing to have the mayor stand there and say ‘We’re taking this seriously,’” said a the person, who asked not to be named to avoid ostracism.

The synagogue has a 1,600-person maximum occupancy, but state COVID-19 guidelines currently limit indoor services at houses of worship to no more than 33 percent. The rules also require a distance of at least 6 feet between people not in the same households, or face coverings.

The Post has reported that City Hall and the NYPD knew about the funeral in advance, and pleaded with the synagogue to hold the event outdoors or enforce mask-wearing.  The synagogue agreed only to announce that masks were available at the door.

The NYPD said it let the event proceed without enforcement.

Previously, the city slapped a $15,000 fine on another Satmar synagogue, which secretly planned a Nov. 8 wedding attended by thousands.