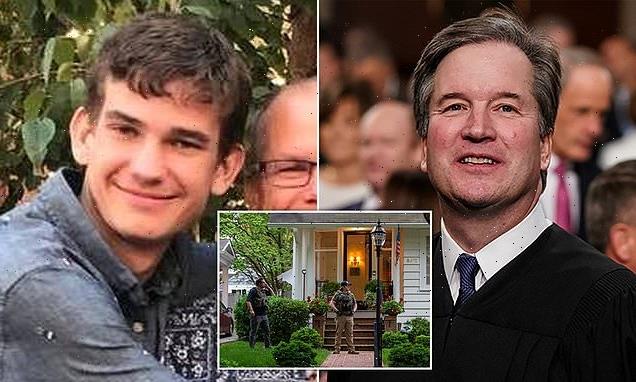 PICTURED: Armed California man, 26, charged with attempted murder for ‘threatening to kill Brett Kavanaugh’ because he was angry about Roe v. Wade and recent mass shootings’ while carrying a Glock 17 and zip ties 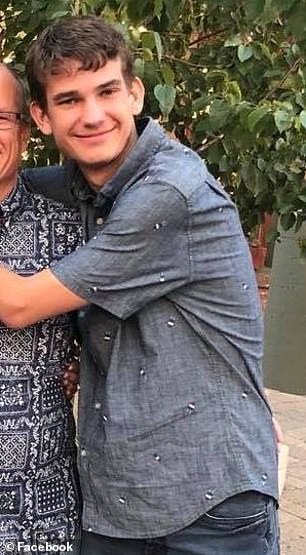 A heavily armed 26-year-old man who was detained on Wednesday near Supreme Court Justice Brett Kavanaugh’s house allegedly told authorities he wanted to kill the conservative jurist and then himself.

Nicholas John Roske of Simi Valley, California, allegedly turned up to Kavanaugh’s Maryland home with a disturbing arsenal of weapons including a handgun, tactical gear, a knife and zip ties.

He told cops he purchased the lethal equipment ‘for the purpose of breaking into the justice’s residence and killing the justice as well as himself,’ according to court documents.

‘Roske allegedly told detectives that he was upset about the leak of a recent Supreme Court draft decision regarding the right to abortion as well as the recent school shooting in Uvalde, Texas,’ Maryland officials said.

He was charged with attempted murder of a US judge and faces up to 20 years in prison if convicted.

An accompanying court filing also states Roske was armed with a ‘black tactical chest rig and tactical knife, a Glock 17 pistol with two magazines and ammunition, pepper spray, zip ties, a hammer, screwdriver, nail punch, crow bar, pistol light, duct tape, hiking boots with padding on the outside of the soles, and other items.’

Officials suggest Roske took a taxi cab to the front of Kavanaugh’s home after finding his address online.

Two Deputy US Marshals saw him exit the vehicle at 1:05 am and look their way before walking down the street.

Roske turned himself in by calling 911 while in Kavanaugh’s neighborhood, and informing them that he was armed and suicidal. He told responding authorities that he wanted to kill a ‘specific Supreme Court justice,’ the filing states. 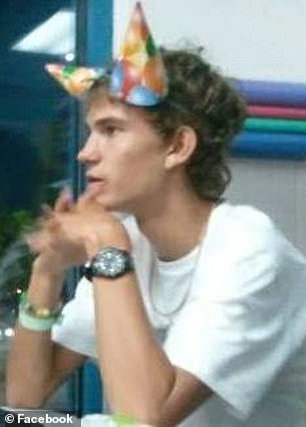 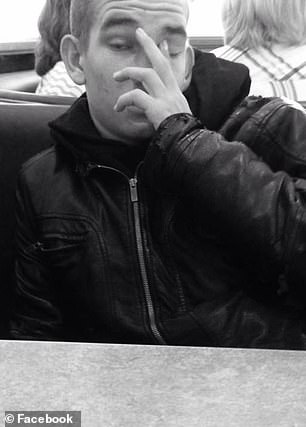 Roske (left and right) allegedly told detectives that he was upset about the leak of a recent Supreme Court draft decision regarding the right to abortion as well as the recent school shooting in Uvalde, Texas. He is pictured left and right in older photos

He was arrested in the early hours of Wednesday morning, Supreme Court spokesperson Patricia McCabe confirmed to DailyMail.com in a statement. 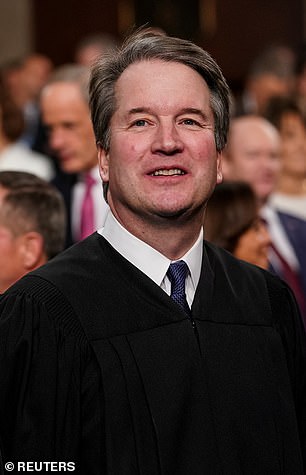 It follows a string of protests across the country over abortion rights – including outside of Supreme Court justices’ homes – that has also seen churches, pro-life centers and abortion clinics come under attack from those with opposing views.

Republicans in Congress that pressured the White House to take a stronger stance against the demonstrations now accuse the administration of fostering the conditions which allowed the incident to occur.

People familiar with the investigation told the Washington Post that the man was also upset over the recent slew of mass shootings across the country that’s claimed dozens of lives in recent weeks.

It’s not clear if Kavanaugh or his family were home at the time.

DailyMail.com reached out to the Montgomery County Police Department in Maryland for comment but was referred to the FBI for specific details on the suspect.

The FBI said they had no additional information to provide.

Kavanaugh’s confirmation to the court under Donald Trump ignited a firestorm of controversy after he was accused of sexual assault by a former high school acquaintance.

Democrat Senate Majority Leader Chuck Schumer made an ominous warning to Kavanaugh in relation to abortion rights in March 2020.

‘I want to tell you Kavanaugh…You have released the whirlwind and you will pay the price. You won’t know what hit you if you go forward with these awful decisions,’ Schumer said.

He’s one of three justices Trump added to the court to form its conservative supermajority at a time when it is facing its most politically-charged docket in decades.

Tensions have run high on both sides of the aisle ever since Politico published the leaked opinion draft indicating that the high court’s conservative majority considered siding with Mississippi officials in the case Dobbs v. Jackson Women’s Health.

The state had asked the court to lower the abortion limit to 15 weeks before asking the court to scuttle those protections granted by Roe v. Wade altogether. 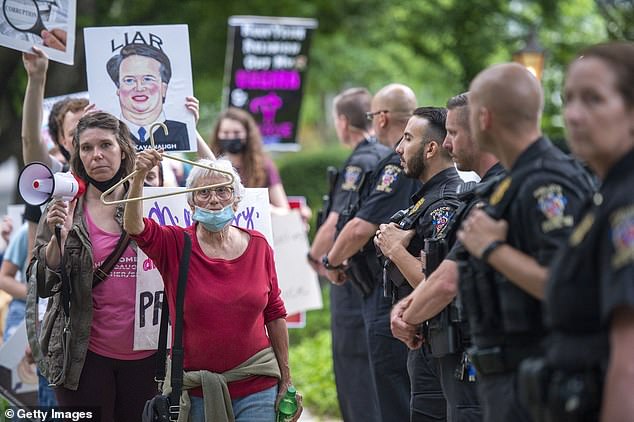 Kavanaugh’s home had been among those targeted by peaceful protests in the wake of the bombshell Supreme Court leak (pictured: an abortion rights demonstration outside of Kavanaugh’s Chevy Chase, Maryland home on May 18) 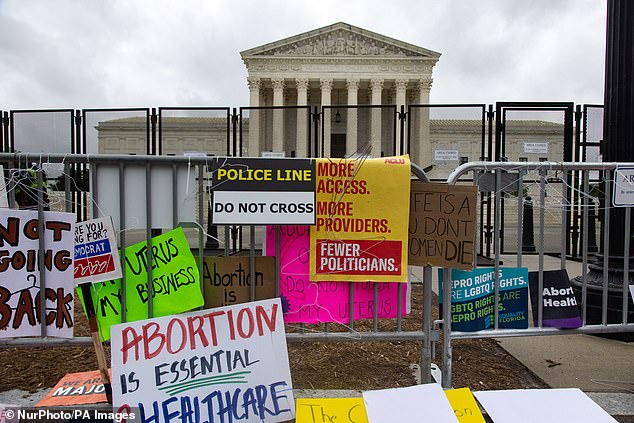 Growing animosity between pro-life and pro-choice factions were among the reasons that forced the Department of Homeland Security to issue a ‘heightened threat advisory’ warning of increased violent incidents caused by extremist groups and lone wolf actors.

‘Given a high-profile U.S. Supreme Court case about abortion rights, individuals who advocate both for and against abortion have, on public forums, encouraged violence, including against government, religious, and reproductive healthcare personnel and facilities, as well as those with opposing ideologies,’ it stated.

Earlier this week a pro-life group’s offices was firebombed and graffitied by arsonists in a suburb of Buffalo, New York.

Around the same time, an abortion clinic was vandalized in North Carolina.

Initial fallout from the leaked memo involved peaceful demonstrations outside of the Supreme Court and even outside of justices’ homes – which Republican lawmakers warned could lead to violence against the jurists themselves. 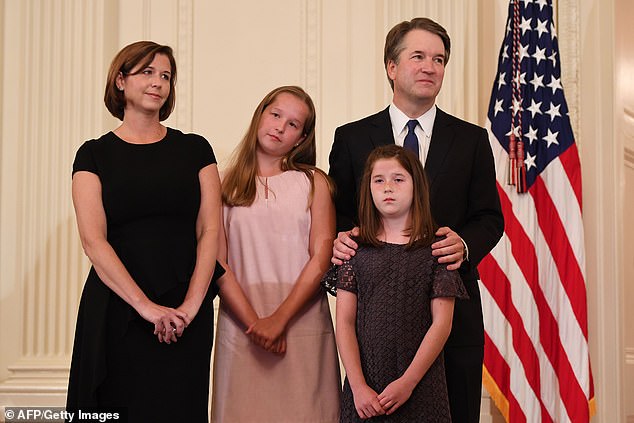 Kavanaugh and his wife are the parents of two young daughters. They all reside in the home that was apparently targeted by the suspect

After mounting pressure over its silence the Biden administration was finally forced to issue a statement endorsing the ‘Constitutional right to protest’ while also issuing a condemnation for ‘violence, threats or vandalism.’

‘Judges perform an incredibly important function in our society, and they must be able to do their jobs without concern for their personal safety,’ said Jen Psaki, President Joe Biden’s press secretary at the time.

The Department of Homeland Security (DHS) issued a ‘heightened threat advisory’ on Tuesday, warning of an increased risk of ‘mass casualty violence’ nationwide fueled by extremist ideologies and personal beliefs.

Among the drivers is the ‘proliferation of false or misleading narratives regarding current events,’ which includes the national divide over the leaked Supreme Court opinion in Dobbs v. Jackson Women’s Health.

‘Given a high-profile U.S. Supreme Court case about abortion rights, individuals who advocate both for and against abortion have, on public forums, encouraged violence, including against government, religious, and reproductive healthcare personnel and facilities, as well as those with opposing ideologies,’ DHS states.

White House deputy press secretary Andrew Bates told DailyMail.com on Wednesday: ‘President Biden condemns the actions of this individual in the strongest terms, and is grateful to law enforcement for quickly taking him into custody.’

‘As the President has consistently made clear, public officials—including judges—must be able to do their jobs without concern for their personal safety or that of their families,’ Bates said.

McConnell directed the most blame toward the leak itself, which Republicans for weeks have decried as the utmost breach of institutional trust.

He called the threat on Kavanaugh’s safety ‘exactly the kind of event that many feared that the terrible breach of the court’s rules and norms could fuel.’

The Kentucky Republican demanded that House Democrats pass a Senate bill aimed at enhancing police protection for Justices amid the leak’s fallout.

‘House Democrats need to stop their multi-week blockade against the Supreme Court security bill and pass it before the sun sets today,’ he said.

Rep. Steve Scalise, the House Minority Whip, said during a press conference: ‘You saw from the White House on down to encourage people to go homes, the private homes of Supreme Court justices. It is a dangerous trend.’

‘Exercising First Amendment rights is one thing. Encouraging people to go to the homes of Supreme Court justices. You see where that can lead? And it’s a shame. Thank God law enforcement was able to arrest the man who was intending on committing that action,’ Scalise said.

Rep. Darrell Issa of California said the alleged plot to attack Kavanaugh was ‘a stark reminder of how the reckless rhetoric of this Administration and Democrat partisans can incite others to violence.’

‘It’s time for Democrats to finally condemn the hate they have brought to the front doors of justices and their families and provide them the protection they so obviously need,’ the Republican lawmaker said.

Attorney General Merrick Garland also condemned the incident, declaring that attacks against Justices of the Supreme Court ‘strike at the heart of our democracy.’

‘We will do everything we can to prevent them,’ he vowed at a press conference on Wednesday.