Melania Trump’s been the most mocked, vilified and humiliated woman on the planet – but now she’s proven herself to be a terrific first lady who deserves all our praise

‘To America’s absolutely incredible first lady,’ said President Trump at last night’s White House state dinner, ‘thank you for making this an evening we will always cherish and remember. Thank you, Melania.’

The other guests, including French President Emmanuel Macron and many of the richest and most powerful people in America, burst into spontaneous applause.

It was a special moment of personal triumph for Mrs Trump, who had planned every tiny detail of the occasion with meticulous care and attention. 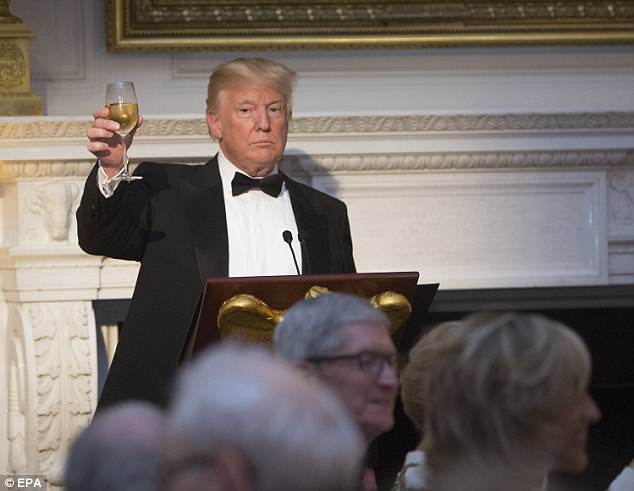 The President offered kind words to his wife at the state dinner, ‘thank you for making this an evening we will always cherish and remember. Thank you, Melania’ 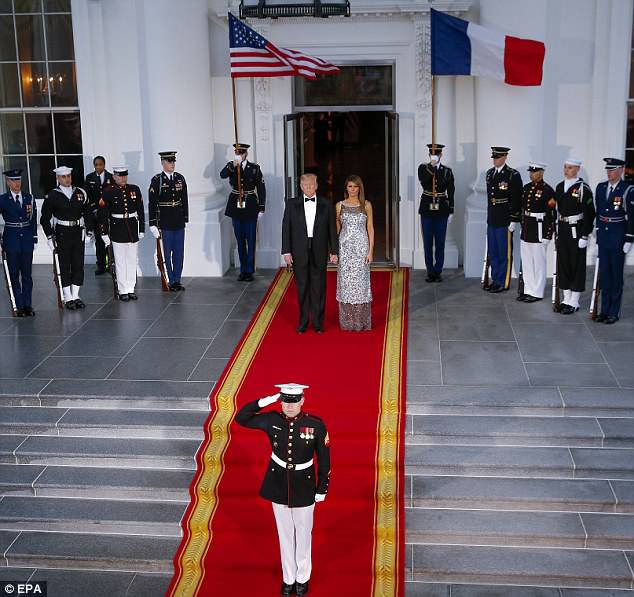 The comments garnered spontaneous applause. It was a personal triumph and a well-deserved tribute to the first lady, who has lived in a massive fish bowl for the past three years

It was also a massively well-deserved tribute to someone who has spent the past three years swimming in a goldfish bowl of spectacularly intrusive proportions.

Imagine what it’s been like to be Melania ever since her husband Donald first announced he was running for president?

No woman in the world has been more objectified, gossiped about, vilified, humiliated, mocked and scorned.

At times, the pressure on her must have been utterly unbearable.

Not least on October 7, 2016, when the now infamous Access Hollywood tape emerged of Donald talking in an obscene and degrading way about women.

The rest of us were shocked to hear him tell Billy Bush about an attempt to seduce his co-host Nancy O’Dell: ‘I moved on her, and I failed. I’ll admit it. I did try and f*ck her. She was married. And I moved very heavily. I moved on her like a b*tch. But I couldn’t get there.’

Our shock turned to horror when, discussing the actress Arianne Zucker who they were about to meet on set, he said: ‘I better use some Tic Tacs just in case I start kissing her. You know I’m automatically attracted to beautiful – I just start kissing them. It’s like a magnet. Just kiss. I don’t even wait. And when you’re a star, they let you do it. You can do anything. Grab them by the pussy. You can do anything.’

But however horrified we all were, just think what Melania must have felt listening to that tape?

They had been married for just eight months when it was recorded.

As the furore raged, she said in a statement: ‘The words my husband used are unacceptable and offensive to me. They do not represent the man that I know. I hope people will accept his apology, as I have.’

In the weeks that followed, more than a dozen women came forward to claim that Trump had sexually assaulted them or committed other acts of sexual impropriety.

He vehemently denied all the allegations, but each claim must have cut into Melania’s heart like a dagger as they were splashed across newspapers and debated all over cable news.

Millions of women took to the streets to march in protest at Trump’s election victory, accusing him of being a sexist and misogynist predator.

Again, what must have Melania been thinking as she witnessed the man who shares her marital bed so widely and abusively reviled by other women?

Then, in the wake of the Harvey Weinstein scandal and subsequent #MeToo movement, came yet more lurid headlines. 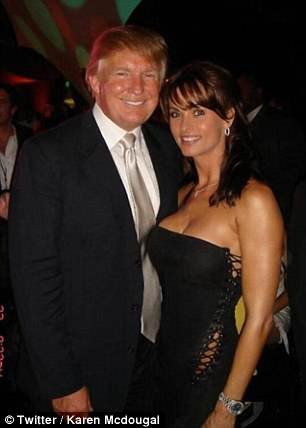 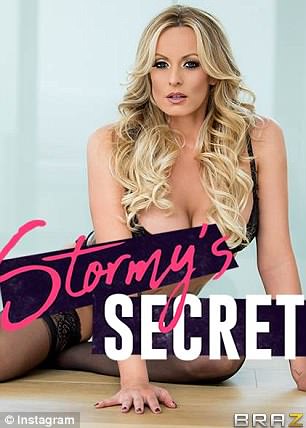 Playboy model Karen McDougal was reported to have been paid off by the Trump-supporting National Enquirer, to cover up her alleged affair with the tycoon in 2006, just weeks after Melania gave birth to their son Barron.

And adult film star Stormy Daniels came forward to say she was paid $130,000 for her silence by Trump’s lawyer Michael Cohen over another alleged affair with Trump around the same time.

Whether she was telling the truth or not, Stormy’s kiss-and-tell interview on CBS 60 Minutes, watched by 22 million Americans, must have been absolutely excruciating for Melania.

Yet throughout all this endless humiliation, she’s never once faltered.

There have been no tearful or angry scenes captured on camera, no Hillary ‘I stand by man’ style interviews on TV, no nothing.

Whatever Melania’s been feeling inside, she’s never once let her mask slip to share it with the world.

Instead, she has quietly gone about her duties as first lady with a quite remarkable degree of dignity and grace. 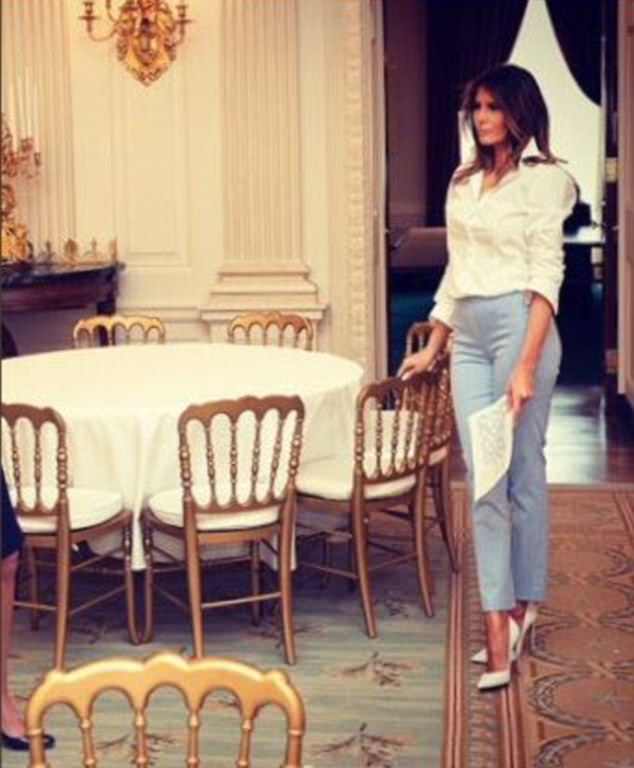 Whatever Melania’s been feeling inside, she’s never once let her mask slip and she has quietly gone about her duties as first lady with a remarkable degree of dignity and grace

Having known her for ten years, this doesn’t surprise me as much as it has surprised others.

I first met Melania in 2008 when I took part in Donald’s Celebrity Apprentice show. We had numerous conversations during the season and I was struck by her poise, warmth and intelligence. She’s very funny in private, and speaks four languages fluently.

Since then, we’ve met many more times. She even came to a book launch party I held in New York where she thanked me profusely for my campaign in favour of gun control, openly disagreeing with Donald.

She wouldn’t say this publicly because she prefers to leave politics to her husband. But don’t be under any illusion that she lacks her own opinions or the courage to stand up to Donald over his.

Melania’s a tough cookie that knows her own mind and doesn’t take any crap.

Donald knows that better than anyone.

When they first met at a New York Fashion Week party in Manhattan, he repeatedly asked for her phone number.

‘You give me yours,’ she fired back.

Whenever I’ve been around them, Melania’s always acted as Donald’s equal and he has treated her as such, even if he finds it hard to admit it.

‘Who wears the trousers in your marriage, Donald?’ I asked him during a campaign interview in 2016.

As to why he married her, he explained: ‘She’s got a tremendous heart and she’s very smart; she was very successful before I married her, as a model. She will make a great first lady.’

I thought of those words today as I digested all the coverage of Macron’s state visit, the first by any foreign leader to America since Trump became President.

And Donald was right: Melania is making a great first lady. 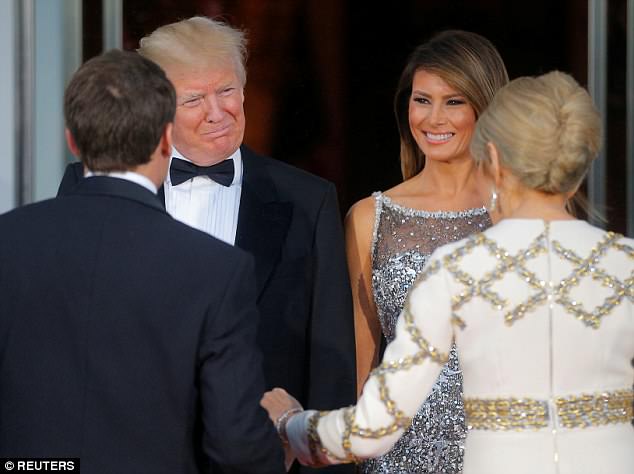 Melania is a tough cookie. The president once told me, ‘She’s got a tremendous heart and she’s very smart… She will make a great first lady.’ I thought of those words today as I digested all the coverage of Macron’s state visit. Donald was right: Melania is making a great first lady

One that every American, whether they love or loathe her husband, can surely agree has barely put a foot wrong since assuming a role she could never have dreamed she would one day have to do when they got married?

She’s had to learn on the job, under constant microscopic attention from a largely hostile media, and amid endless hysteria about her husband’s alleged philandering.

Yet she’s come through this baptism of ferocious fire with her head held resolutely high, even if privately it’s been killing her.

This has been Melania’s defining week as first lady. 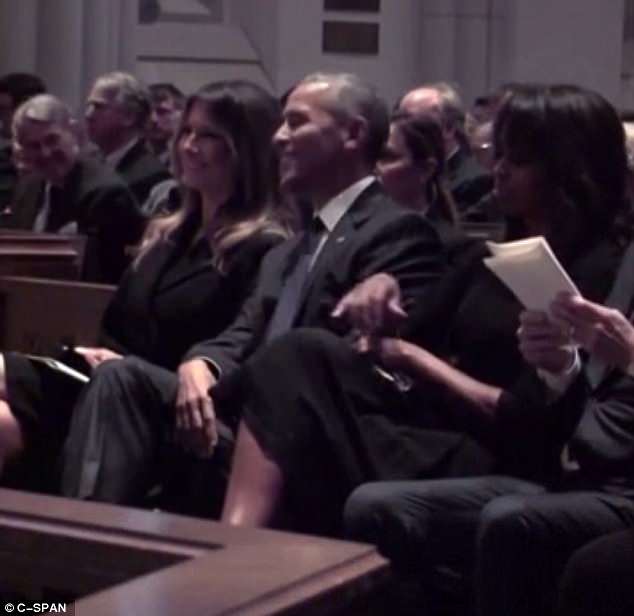 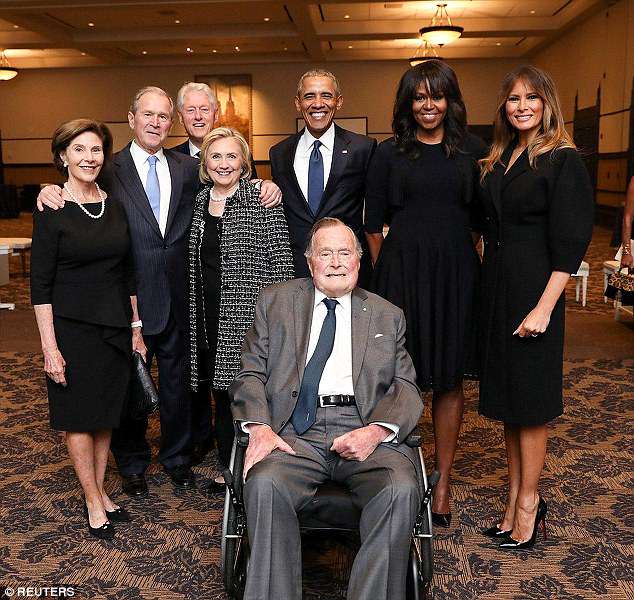 She attended Barbara Bush’s funeral where she was seen sharing a joke with Barack Obama in the church and taking part in that already legendary photo of presidents and their first ladies.

Then the Macrons came to town, and Melania came into her own.

From the moment she stepped out yesterday morning in that stunning wide-brimmed white hat and dazzling white suit, she evoked memories of the other great White House fashion icon with an (allegedly) unfaithful husband, Jackie Kennedy. 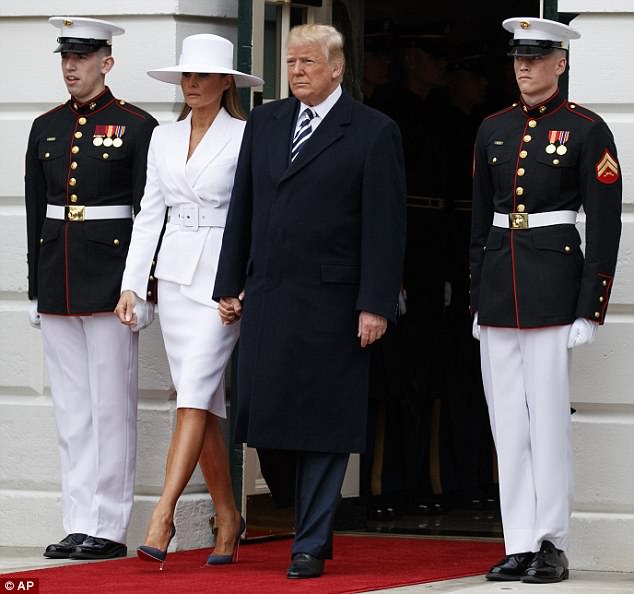 From the moment she stepped out in that stunning wide-brimmed white hat and dazzling white suit, she evoked memories of the other great White House fashion icon Jackie Kennedy 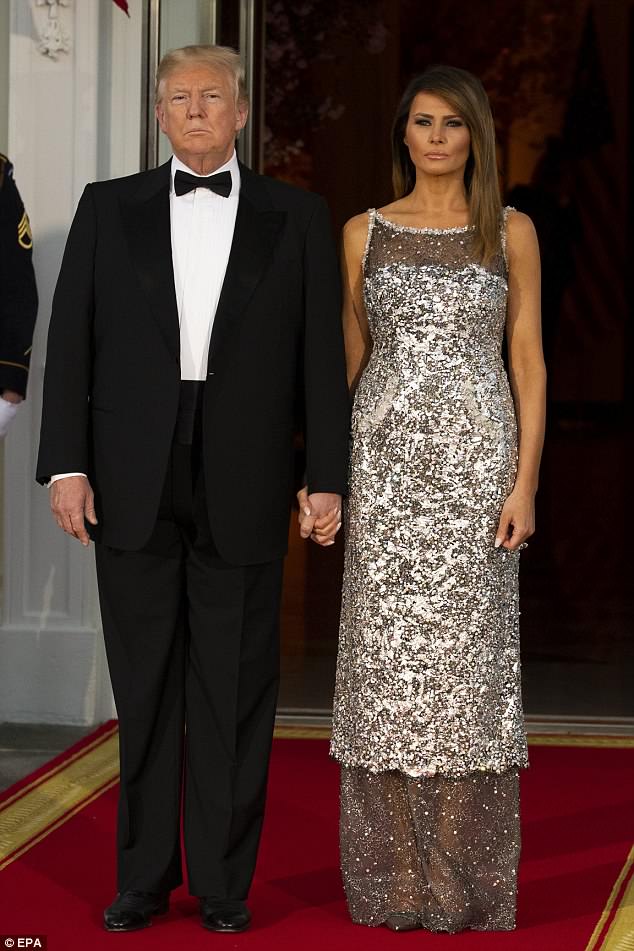 She exuded class and glamour, was the perfect hostess and the dinner’s been declared an unqualified success by even Trump’s biggest media critics.

Melania Trump first came to America from Yugoslavia in 1996 as young, ambitious immigrant Melania Knauss, daughter of a car dealer.

Today, she is America’s first lady and doing a terrific job of it too.

If I had a good enough hat to match her impeccably high millinery standards, I’d tip it to her.