A pilot, believed to be in his 40s, has suffered severe burns and multiple fractures after the plane he was flying crashed at Luskintyre near the Hunter Valley.

NSW Ambulance paramedics arrived shortly after 2pm along with a specialist medical team with the Westpac Rescue Helicopter. 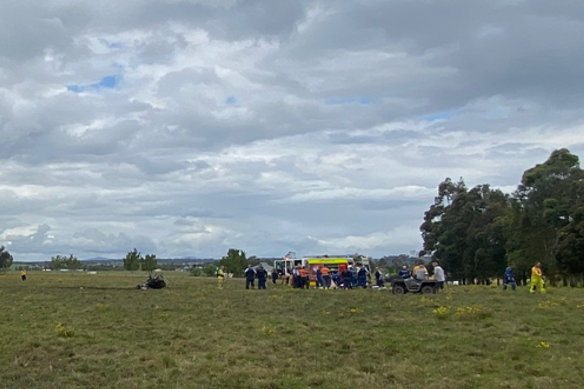 Emergency services at the scene of a plane crash in the Hunter Region of NSW in which a man suffered severe burns and multiple fractures.Credit:NSW Ambulance

NSW Ambulance Inspector Jake Broughton-Rouse said the patient was already out of the aircraft when paramedics arrived.

“The plane had burst into flames on impact, which caused severe burns to 80 per cent of his body along with a number of other serious injuries<” he said.

“He was treated by NSW Ambulance paramedics and the Westpac Rescue Helicopter’s medical team. The patient was placed into an induced coma and transported to hospital via helicopter.

“This was an extremely complex and confronting scene for paramedics. Our crews worked closely with Fire and Rescue NSW, the Rural Fire Service, NSW Police and the Westpac Rescue Helicopter medical team to effectively care for this critically unwell patient.”

The man has been taken to Royal North Shore Hospital in a critical condition.