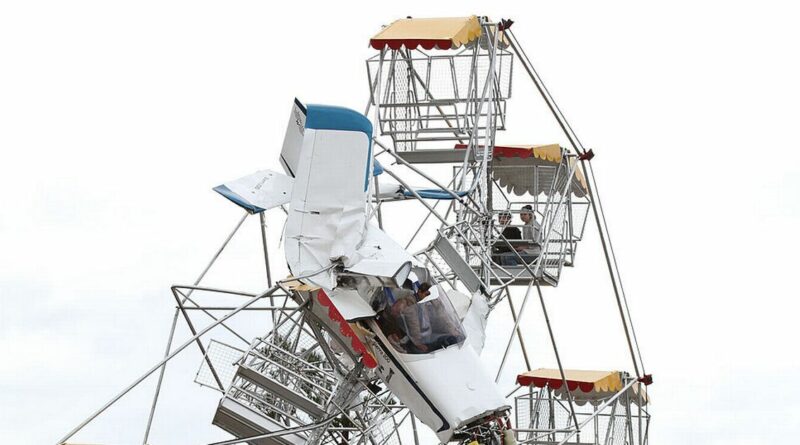 A shattered plane was left crumpled into wreckage after it tore through a Ferris wheel and left four people stranded, including two kids, for over an hour.

The crash and subsequent rescue operation was carried out after a plane crashed into the side of a wheel at 2011's Old Bar Festival.

Local pilot Paul Cox and his son-in-law had been flying the plane when they had failed their first landing attempt on a stretch of airstrip next to the festival.

Turning the plane after failing to land led to the direct collision with the amusement park ride, which had two children on board at the time of the crash.

Those two children were eventually rescued from the top basket of the Ferris wheel, along with Cox and his son-in-law, who were stranded and dangling for over an hour.

Taree Mayor Paul Hogan said at the time of the accident: "I had to open the ceremony and I said we've witnessed a miracle here today. It could have been far worse. If [the ferris wheel] had toppled over, boy oh boy."

Emergency response teams worked for hours in extracting the plane from the Ferris Wheel.

One witness, Lorraine, described the "crunch" that was heard around the park at the time of impact.

She said: "He'd gone in and made a landing and then I heard him taking off again so I turned around to watch him come, because he was going up a pathway [that] took him over the top of the Ferris wheel.

"And as I turned around to watch him I thought 'Christ he's low, he's coming in low over that' and next thing bang he went straight into it."

She added that the only thing stopping the plane from heading straight through the Ferris Wheel was a "support bar", ABC reported.

Another witness, Rimian Perkins, added: "It was just like a big crunch. It's pretty bizarre. I guess Ferris Wheels are stronger than they look. It must have been a low speed collision.

Following the crash, Amber Christine Arndell, one of the children on the ride at the time of the crash, was awarded £1.3million ($1.5million) in damages, The Guardian reported.