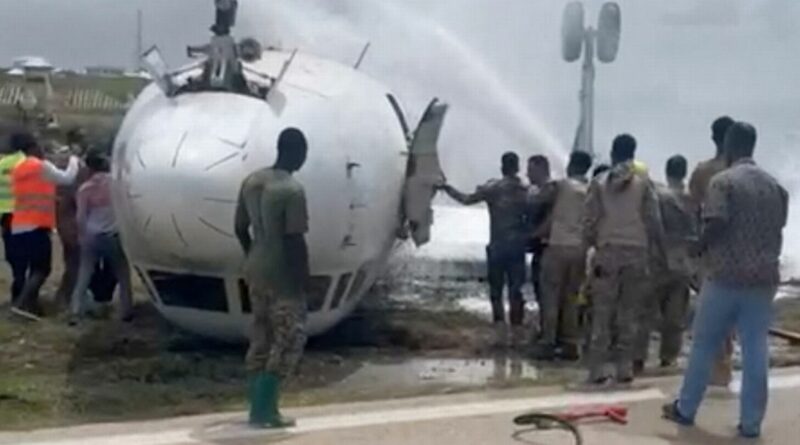 Dramatic scenes took place at an airport in Somalia after an aircraft crash landed.

The Fokker-50 craft, run by Somalia's biggest domestic airline Jubba Airways, flipped over on the runway – but thankfully no-one was hurt.

Video footage of the crash at Adan Adde International Airport in Mogadishu shows the plan with its wheels in the air, upside down and on fire.

READ MORE: Four people killed as two planes crash into one another in mid-air over Las Vegas

The flight started its doomed journey from Mogadishu, and was landing in Baidoa – but crashed at around 11.30am.

According to Somalia's civil aviation authority, 36 passengers and crew were on board.

A spokesman for Jubba Airways said: “All passengers and crew on board have safely been evacuated with nil casualties.”

Fire crews were on the scene trying to douse the flames, while black smoke could be seen for miles around.

Local reports state that the plane was built in 1992, and was originally made for Lufthansa CityLine, before Air Nostrum and Denim Air were given control of it.

It was then leased to Skyward International Aviation, before ending up in the hands of Jubba Airways via a sub-leasing agreement.

“We applaud the quick action of the Somalia fire brigade at the Aden Adde International Airport for their quick action in rescuing and saving lives,” a spokesman for the Intergovernmental Authority on Development told local media.

An investigation into the crash is now underway, as it was not immediately clear how the plane crashed, and then flipped over, when weather conditions were reported to be decent at the time.

Video of the aftermath of the incident went viral on social media, with many calling it a miracle that nobody was injured in the horror crash.

One user wrote on Twitter: “It is incredible that there is no death, what a pilot.”

And another wrote: “Credit to the pilot for landing horizontal and credit the rescue team for risking their lives.

The Fokker-50 plane was first produced in the Netherlands in 1985, and finished its production line life in 1997 – it can only accommodate 46 passengers, including crew.

It was replaced by the Fokker-60, which is mainly used by the Royal Netherlands Air Force, a well as Peru's Naval Aviation and China's Air Force.

The aircraft has suffered from several accidents over the years, including in 1995, when 34 out of 53 passengers and crew were killed when a Malaysian Airlines Flight 2133 crashed during approach in Tawau, Sabah.

And 37 out of 40 passengers, and six crew, were killed in a crash on approach to Sharja International Airport in the UAE in February, 2004.

To get more wrestling stories from Daily Star delivered straight to your inbox sign up to one of our free newsletters here .