Home » Pleasures and Prescriptions of the West African Diet, at Nneji 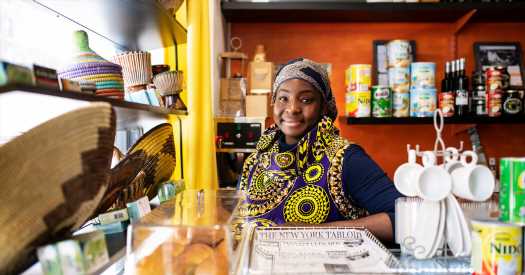 The last time I picked up dinner from Nneji, a small shop in Queens that sells African products and food for takeout, something new was hidden under one of the steel lids that cover steaming pans of marigold-yellow wilted onions, glossy red tomatoes stewed with a cow foot or two, lumps of goat that have taken in by osmosis the sweetness and power of several different peppers, and other long-simmered West African pleasures.

“I made this for the first time today, so I haven’t had a chance to put it on the menu yet — it’s okazi,” said Beatrice Ajaero, the shop’s owner. “It’s a green leaf that has a lot of iodine. Women eat it when they’re pregnant.” Then, seeming to notice that I wasn’t pregnant and wasn’t likely to be, she smiled and added, “But other people eat it, too.”

Unveiling the dishes that are ready for takeout, Ms. Ajaero usually follows the same routine: a lifted lid, a few turns of the spoon to bring up good bits that might be hiding under the surface and a brief gloss on the nutrients within. Even if you don’t care about your own beta carotene intake, it is somehow reassuring when somebody else does, particularly in a year when we keep being told, not very helpfully, to take care of ourselves.

Underneath Ms. Ajaero’s concern for your well-being is a second, understated message that may be directed to her neighbors in Astoria, where kebabs and tzatziki are more common than efo riro and fufu: If you know how nourishing the Mediterranean diet is, you should know about the West African diet, too. 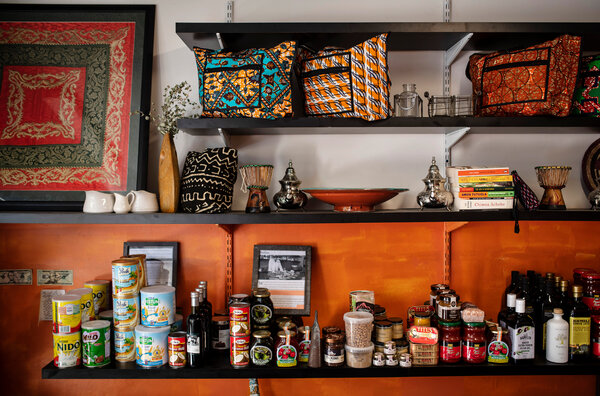 Nneji, which opened last summer, carries groceries from both parts of the world. It is not a store where you will buy all the ingredients you need to make dinner, but you will find things there that your supermarket probably doesn’t stock.

Greek olives and olive oil share one small patch of wall with shea butter and African black soap. A neighborhood roaster, Mighty Oak, supplies single-origin coffee from farms in Kenya, Ethiopia and other countries, on display next to cans of palm fruit concentrate from Ghana and evaporated milk from Greece. Pastries from local bakeries — walnut baklava, pistachio-loaded phyllo tarts, ventagli in the shape of rabbit ears — are kept in a glass case.

Ms. Ajaero’s parents are Igbos from Nigeria who were children in the 1960s, during the country’s civil war. Before she was born, they immigrated to New York City, where she was raised. Her mother is responsible for the menu with guidance from her aunts, while Ms. Ajaero oversees the day-to-day cooking. They try to reach beyond their family’s culture to the cuisines of other West African regions and countries.

If Ms. Ajaero is helping somebody else when you arrive, you will have time to study all this from an open area that is just big enough for two people to stand six feet apart. There is nowhere to eat inside or out. If you order hot food, it will be packed in containers, sealed and bagged.

When you decant those containers at home and eat, you start to wonder if Nneji has invented some next-level steam table technology. Stews left in pans over hot water typically keep stewing. They slide past tenderness and become dull amalgams of pulp, or in the case of meat stews, pulp with little islands of animal bone in it.

This doesn’t happen at Nneji. The stews hold their shapes and textural contrasts in some magical state of suspended animation. In its egusi, crushed gourd seeds embedded in wilted spinach and red bell peppers stay crisp. Flame-colored palm oil — high in beta carotene, Ms. Ajaero will tell you — sends its rich, lubricating softness gliding over the surface. It is almost the only liquid in this egusi, which has some of the consistency of a loose pesto or romesco, and a lot of their toasted-nut crunch, too.

The onions in Nneji’s yassa are cooked just to the point that chefs call crisp-tender. They are flavored with black pepper and lemon in a mustard sauce that tastes like the August sun at noon. Yassa is almost invariably braised with chicken. At Nneji, they are cooked separately, to put the yassa within the scope of vegan customers. If any braised onions ever deserved solo billing, these are those onions.

I always leave Nneji with a few more things than I’d meant to buy. This is due in part to Ms. Ajaero’s persuasive sales pitches, and in part to her habit of tucking in a little extra something.

“Do you like goat?” she asked one afternoon. I do. When it smolders with ginger, cayenne and Scotch bonnets, as the goat at Nneji does, I like it very much.

“Then I’m going to give you some goat with your red stew, because it doesn’t have as much cow foot in it as I would like,” she said. The red stew did look a bit like marinara that day, although the chiles and other spices still rang out clearly, and its lip-smacking glossiness strongly suggested that a foot had been brought to bear at some point. Ms. Ajaero must have remembered me as a goat guy, because without saying a word she spooned some into a pint container of okazi the next time I bought dinner from her.

Not that the okazi needed any help. The firm green leaves, cut into threads, were stewed with what seemed like enough smoked barracuda to keep a fishing boat employed for a week. Even without the dried crayfish that many Nigerians put into their okazi but that are left out at Nneji, where all the cooking is halal, it is one of the fishiest bowls of greens in the city.

Exuberantly seasoned food like Nneji’s calls for a less assertive accompaniment, like yam pounded to a kind of white taffy, or balls of cassava dough the size of apricots, or steamed fonio, which thanks to the marketing work of the Senegalese-American chef Pierre Thiam is suddenly all over New York. When Ms. Ajaero asked me which of these foods, known as swallows, I wanted with my egusi, she mentioned that fonio is high in calcium, even though it wasn’t what her family would typically eat with egusi.

I told her I was leaning toward the pounded yam.

What the Stars Mean Because of the pandemic, restaurants are not being given star ratings.