Theresa May will unveil plans next week to use the ‘Brexit dividend’ to pour billions more into the NHS.

The Prime Minister is finalising the details of a new ‘long-term plan for the NHS’ designed to avoid a repeat of last winter’s crisis.

The deal will include a funding package expected to involve annual funding rises of around three per cent in real terms.

Mrs May will also make it clear the new settlement will be funded in part by the ‘Brexit dividend’ generated by the UK no longer having to pay EU membership fees. In doing so she will overrule Chancellor Philip Hammond, who has been fighting to prevent a direct link between Brexit and extra cash for the NHS.

The decision will help deliver on one of the most high-profile pledges of the Leave campaign, which was emblazoned across its tour bus. It represents a victory for Brexiteer ministers such as Boris Johnson and Michael Gove, who have been urging the PM to make good on the referendum pledge for months. It is timed to coincide with the 70th anniversary of the NHS in July and designed to give the health service the funding needed to adapt to the demands of an ageing society. 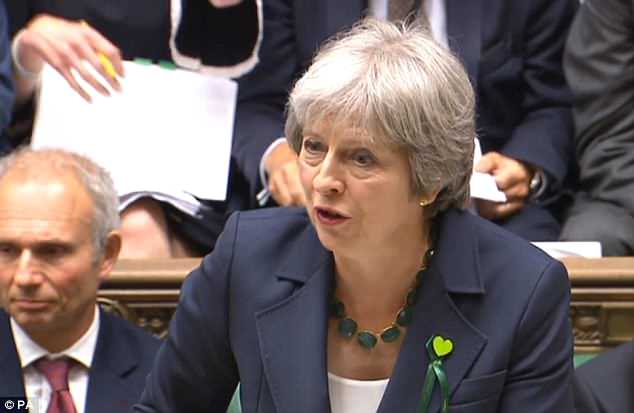 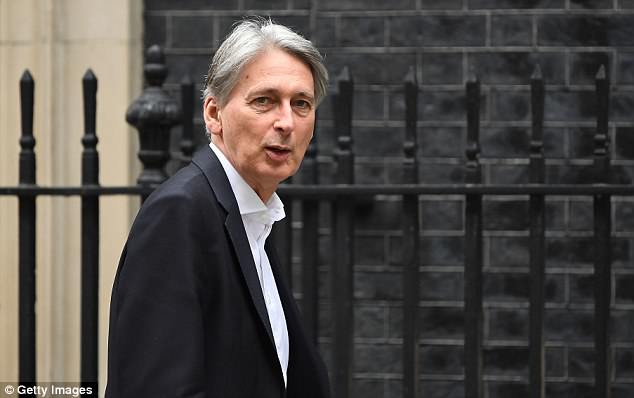 Mrs May’s decision will overrule one made by Chancellor Philip Hammond. He is pictures arriving for a cabinet meeting at No 10

Ministers are keen to avoid a repeat of last winter’s NHS crisis, which led to thousands of patients having to wait for treatment on trolleys.

The Prime Minister said in March that she wanted to see a new ‘long-term funding plan’ for the health service. Mr Hammond then announced in the Budget that the NHS would be taken out of the normal spending review and treated as a special case.

He has publicly dismissed the idea that a ‘Brexit dividend’ could be used to fund the NHS, and sources claim he has been resisting the idea behind the scenes.

One Cabinet source said: ‘Hammond seems determined to block anything that could be seen as a win for the Brexiteers.

‘It is ridiculous. One of the central messages of the referendum campaign was that people want to take back control of the money we send to Brussels and spend it on domestic priorities like the NHS.

‘We have to spend more money on the NHS anyway, so why not use it as a Brexit positive and show people they are getting what they voted for? It’s an open goal.’

Whitehall sources said Mr Hammond had been overruled by Mrs May. ‘This is a multi-year settlement. In the later years there will be a lot of cash freed up by the fact we are no longer in the EU and the Prime Minister is very clear that should be spent on domestic priorities. The biggest priority is the NHS.’

A three per cent rise in real terms would equate to about £5billion a year extra for the NHS, although Mr Hammond is still pushing for a lower overall figure.

While the Prime Minister is expected to make her pledge next week, final decisions on how it will be paid for will be left until the Budget.

The Chancellor has vetoed plans for a dedicated ‘NHS tax’ involving putting 1p on National Insurance. But he is warning that other tax rises will have to be identified to generate funding on the scale required.

Reports have suggested the Chancellor is considering a freeze on taxation thresholds, which could raise £3.7billion by the end of the parliament in 2022. Scrapping planned cuts to corporation tax would raise a further £5.7billion.

Some in government believe much of the money could be funded temporarily by borrowing or raiding the reserves until the Brexit dividend comes good.

The UK’s net contribution to the EU fluctuates but is around £10billion a year.

Mrs May said it March that she wanted to see some of this money used to fund public services, adding: ‘There will be money available for us to spend on our priorities. Priorities like the NHS and schools.’