Tensions between parents and neighbours are ‘threatening to boil over’ due to parking problems near a sought-after primary school.

Police and staff at Hill View Junior Academy in Sunderland have received complaints from residents, claiming parents are blocking driveways and being aggressive when they drop off and pick up their children.

Northumbria Police said there have been reports of cars blocking the road and  obstructing traffic, sparking confrontations between parents and locals. 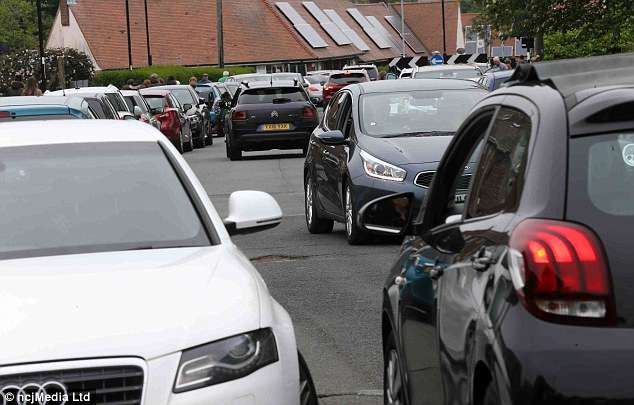 Tensions between parents and neighbours are ‘threatening to boil over’ due to parking problems near Hill View Junior Academy in Sunderland. Pictured: Traffic outside the school 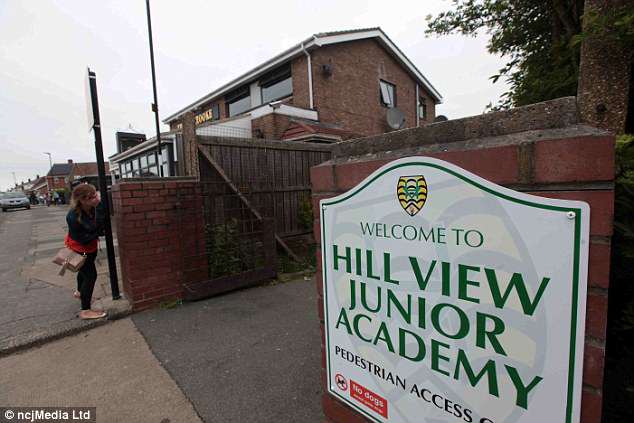 Kathleen Sidaway, 72, who lives opposite the school, said: ‘They do often park in front of our driveway.

‘There was one man who was quite abusive when I asked him to move.

‘There was a lady quite a while ago who was parked in front of the driveway, I saw her when I was getting ready and thought she would be gone when by the time I went out.

‘But by 9.15am she was just coming back and I said to her that she had made me late.

‘It does make it difficult when I have to reverse out, and it is every day.’

Ms Sidaway, who has lived on Queen Alexandra Road for more than 40 years,believes the issue has become worse recently.

She said: ‘There seems to be a lot more parents driving their children to school now. 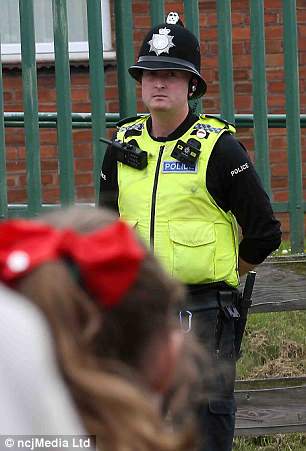 Northumbria Police said there have been reports of cars blocking the road and obstructing traffic, sparking confrontations between parents and locals

‘It used to be that people walked, but I think there are more children from outside the area because it is a good school.

‘If you take the cars from the school and the hospital, there is quite a lot of traffic on the road.’

Brian and Jean Edwards say they have also experienced problems outside their home.

Mr Edwards, 67, said: ‘If it is just for five minutes in the morning or afternoon it is understandable, but sometimes parents arrive at 2.30pm when the kids don’t get out until 3.15pm.

‘There have been a few instances where people are parked right across our driveway and sometimes on the street you can’t get a parking space.

‘I think that is more to do with people using the [eye] infirmary though.

‘People seem to park all day so they don’t have to pay there.’

Jean, 64, added: ‘I think residents should have priority for parking.

‘We find that the worst time is when there is an event on at the school and cars are parked right along the road and in areas that aren’t for parking.’ The school’s head teacher, Tricia Bevan, said children are being put at risk because of inconsiderate parking of parents

‘I feel like they think because they’re only five minutes it doesn’t matter, but it is my driveway they are blocking,’ she said.

In a bid to calm tensions, police and teachers are pleading for cooperation as the school heads into its final term of the year.

PC Adam Carlton, of Northumbria Police, said: ‘We would like to remind drivers that it is a criminal offence to park irresponsibly and wilfully obstruct property or roads.

‘Officers will continue to patrol the area and take appropriate action against any offenders, and we would urge drivers in the area to be respectful of people’s personal property and to park in designated, safe areas which do not block driveways or narrow streets.’

The school’s head teacher, Tricia Bevan, said children are being put at risk because of inconsiderate parking of parents.

She added: ‘We also need to be mindful of our local residents who have, at times, taken verbal abuse from parents.

‘Our message is simple. We would ask all parents to show consideration for those living around our school and to ensure they park safely – we can not allow our children to be put at risk.’

A spokeswoman from City Hospitals Sunderland NHS Foundation Trust said it always make sure information about parking facilities is made very clear and widely available.

She added: We would always encourage our patients and visitors to use the dedicated car parking facilities that we have available on the hospital site.’

Anyone who witnesses irresponsible parking or any subsequent disorder in the area is asked to contact police on 101.