An Aboriginal teenager who had his cheek “torn apart” and needed surgery after being arrested should not have been tackled or struck by police, but the five officers involved did not commit misconduct, according to the independent police watchdog.

Police officers arrested the 14-year-old in western Sydney after pursuing a stolen car in August 2020. 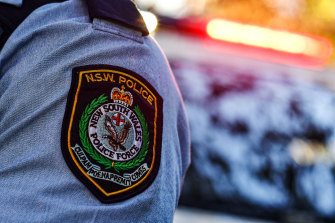 The LECC has cleared police officers of wrongdoing, but made several recommendations for future arrests.Credit:Sam Mooy

The Law Enforcement Conduct Commission (LECC) found that after the teenager ran from the car he was tackled into a shipping container before four officers wrestled him into the ground, with one striking him several times.

Its report said it was “regrettable” that none of the officers were wearing bodycams, and that if they had then an investigation may not have been necessary.

The LECC began investigating the incident after the Department of Family and Community Services reported an alleged police assault. The boy, referred to as KR01, was arrested along with four other young people.

He was taken to hospital with facial injuries after the arrest, with a paediatrician saying that his injuries were “extensive and severe” and that he needed surgery under general anaesthetic. He alleged that he had been repeatedly kicked and struck, and hit in the head with police radios.

The LECC found that the teenager had run from the car before being tackled by a police officer into a shipping container with several exposed metal hinges and poles, saying this was the most likely cause of his facial injuries.

Four officers in total helped restrain the teenager on the ground, with one striking him three times “to gain control”.

"Officers KR03, KR04 and KR06 all gave evidence that they were aware that KROI had used a knife the evening before and they were concerned that he may still have a weapon on his person," the LECC report said.

The report found that there was no evidence the officers were holding police radios, or struck the teenager with them.

“A young slightly built adolescent had at one point four police officers wrestling with him with at least one of them striking him three times. To KROI this may well have felt like he was being punched and attacked by several police officers, possibly with police radios,” the report said.

“Any struggling and screaming done by KROI following his being tackled by Officer KR06 can only be considered a reasonable reaction to having his cheek torn apart on the container.”

The LECC found that officers should not have struck the teenager while he was on the ground, or tackled him in the first place.

“KROI was effectively surrounded by police officers, with more continuing to arrive on the scene, and had no means of escape,” the report said.

It also found that police did not mention any use of force at all in its report of the arrest in its incident database, COPS, saying that while there was no “maladministration” it was a “significant omission”.

However, the officers were cleared of any wrongdoing in the LECC’s investigation.

“The Commission is satisfied that the injuries caused to KROI were not inflicted intentionally or as a result of unreasonable use of force and the evidence does not support a finding that any police officer engaged in serious misconduct,” the report said.

The LECC recommended more widespread use of body cameras, noting that none of the officers were wearing one.

The LECC suggested officers should take photos of arrest scenes after incidents such as these to help with future investigations, noting that mobile phone footage it managed to obtain showed a pool of blood at the spot the teenager was arrested.

It also said that there was a lack of command and control over the situation, and recommended that NSW Police review how responsibilities are handled when multiple teams cover a single operation.