Detectives have released descriptions of three youths wanted in connection with a devastating fire at a five-storey block of flats in Glasgow.

The Unfinished flats on Riverford Road caught fire and were quickly engulfed in flames on Friday after three youngsters were seen on the construction site, say Police Scotland.

Emergency services have been at the scene of the blaze for almost 24 hours and are now appealing for witnesses who may have seen the young people in the area when the fire was started.

The fire started shortly after 7pm on Friday in the Pollokshaws area of the city, with firefighters remaining on scene around the clock trying to extinguish the flames. A fire at a five-storey building in the south-side of Glasgow. Fifteen fire engines have spent several hours tackling the fire that broke out just after 7pm on Friday at Riverford Road, Pollokshaws, with the area closed off by emergency services

At the height of the incident, 15 fire engines were at the scene and there were still two appliances there by Saturday afternoon.

On Saturday evening, Police Scotland issued a witness appeal in the hope of tracking down the youngsters, who are believed to have been at the site for approximately a quarter of an hour.

Officers are searching through CCTV footage and have said that the wanted youths – who left the scene in the direction of Riverford Road – were all wearing dark jackets on the evening of the fire.

The cause of the blaze has not yet been confirmed by the police or Scottish Fire and Rescue Service, but detective constable Alyson Dowds said: ‘We are working to identify the three people who were seen entering Riverford Gardens at around 6pm on Friday evening. 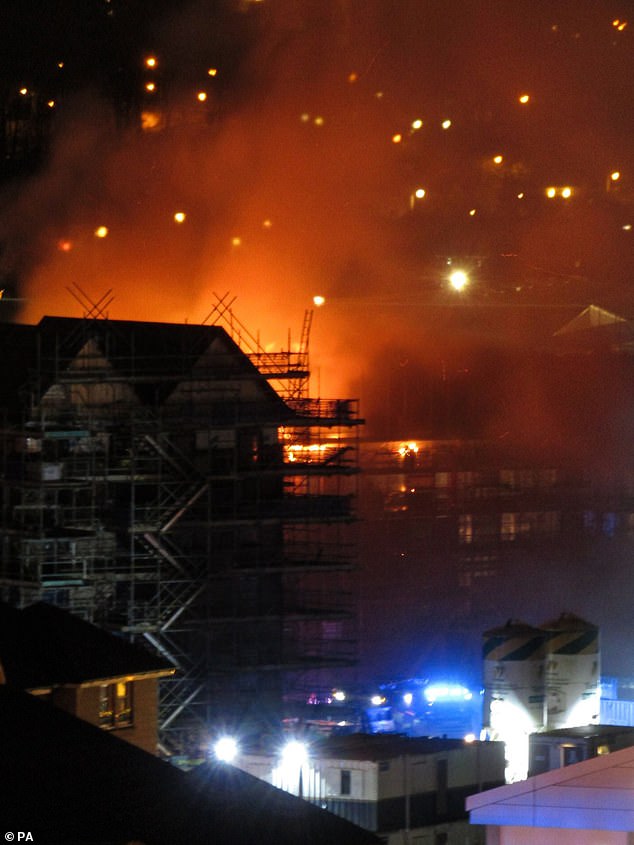 ‘They were in the area for about 15 minutes, then left heading towards Riverford Road.

‘We have been carrying out enquiries in the local area and studying CCTV footage to gather more information.’

Witnesses, or anyone with information about the three youths, are being asked to contact Helen Street police station by calling 101 and quoting reference number 3331 of 27 December 2019.

Speaking in the aftermath of the fire, Scottish Fire and Rescue Service spokeswoman said: ‘Firefighters have been working through the night to extinguish a fire within a five-storey unoccupied building at Riverford Road in Glasgow.

‘One appliance and a high reach appliance remain at the scene to make the area safe.

‘We were alerted to the fire at 7.11pm on Friday, December 27, and at its height fifteen appliances were in attendance.

‘There are no reported casualties.’