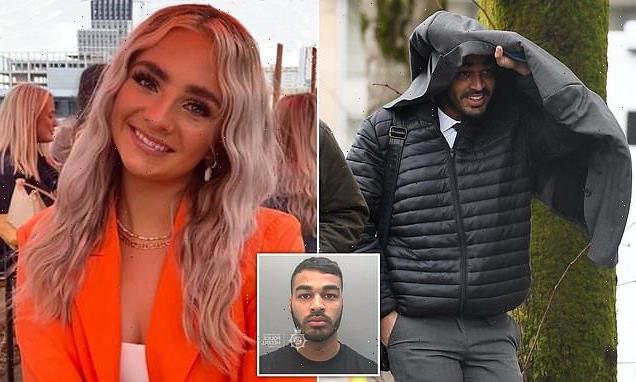 An ‘obsessed’ jilted South Wales police officer from Swansea has been jailed for three years and six months after using Crimestoppers to try to frame an ex-girlfriend for murder and drug dealing.

PC Abubakar Masum, 24, wrongly accused Mia Pitman, 23, of a string of crimes in anonymous tip-offs after she dumped him.

University student Ms Pitman was arrested by armed police while at her part-time job stacking shelves in the Swansea Marina Tesco, and her student digs were raided as officers searched for a gun.

Cardiff Crown Court heard that Masum was ‘obsessed’ with Ms Pitman who ended their relationship after she learned he had been seeing another woman.

After she broke up with him Masum began making ‘false, untrue and malicious’ claims against her and other men in anonymous calls to Crimestoppers.

Ms Pitman, a criminology student who wanted to enter the police force, was accused of shooting dead an Albanian gangster, hiding a gun in her garden, and plotting murders with Tesco colleagues. 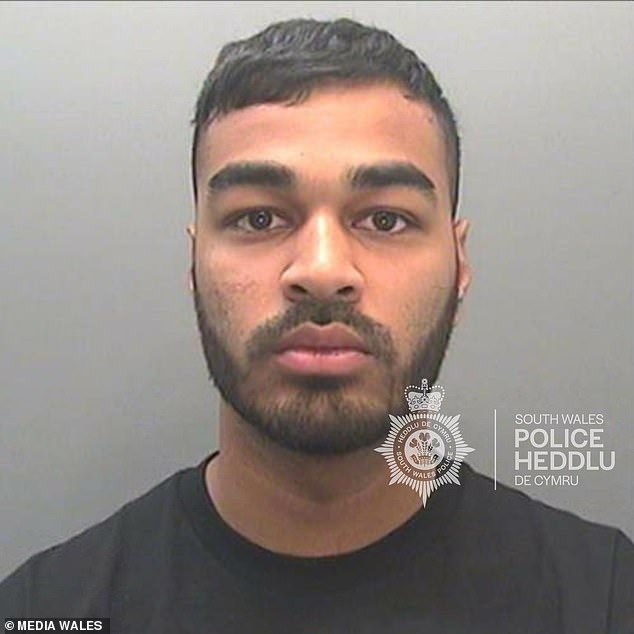 PC Abubakar Masum (pictured), 24, wrongly accused Mia Pitman, 23, of a string of crimes in anonymous tip-offs after she dumped him

Mr Hughes said in one call Masum reported: ‘Mia Pitman is storing is a handgun on behalf of Leon Croucher. He is a known Class A drug dealer.’

The call went on to say that Ms Pitman and her workmate Mr Croucher ‘planned to shoot’ a man who allegedly owed them drug money.

Mr Hughes said Ms Pitman and Mr Croucher were arrested mid-shift by armed police while working at the Tesco store in Swansea Marina.

Another 20 armed officers raided her student home to look for a gun after the bogus anonymous tip-off.

The court heard an investigation was launched into Masum after police began to suspect the repeated calls against Ms Pitman were ‘malicious’. 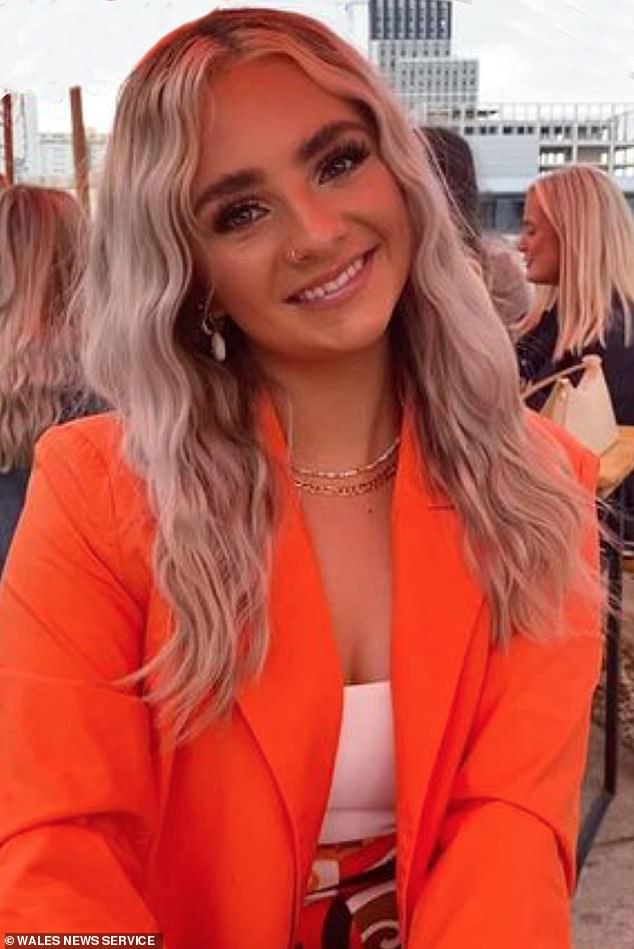 University student Ms Pitman (pictured) was arrested by armed police while at her part-time job stacking shelves in the Swansea Marina Tesco , and her student digs were raided as officers searched for a gun.

Mr Hughes said detectives realised some of the information in the reports would only have been made available to serving South Wales Police officers or members of the criminal underworld.

After being arrested Masum admitted making all of the calls but said they had been made ‘in good faith’ from real posts he witnessed on Ms Pitman’s Snapchat.

Mr Hughes said: ‘He felt he had to make the reports because he feared for his own safety.’

Masum, of Swansea, denied two counts of perverting the course of justice and unauthorised access of a police computer.

At his trial in March, Masum, of Swansea, was found guilty of two charges of perverting the course of justice and securing unauthorised access to computer material.

He was jailed for a total of three years and six months. 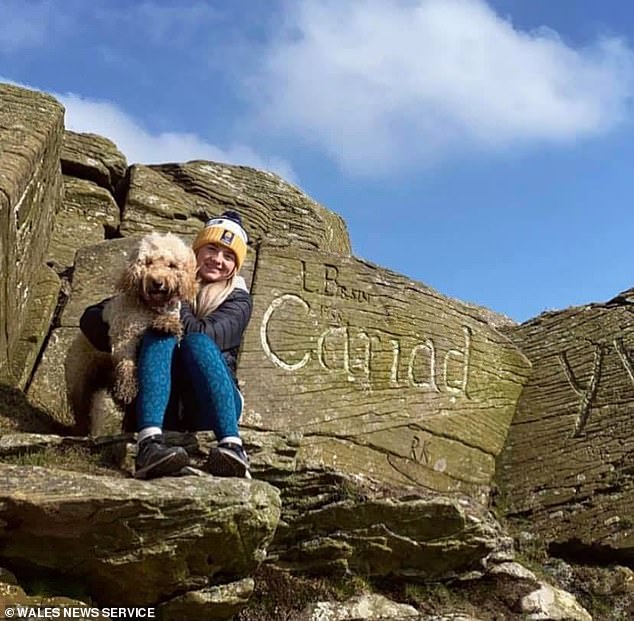 Ms Pitman (pictured) was wrongly accused of being linked to the criminal underworld. Armed police raided her home looking for a Glock handgun and questioned her over a planned murder

Masum was dismissed in his absence by South Wales Police earlier this month for gross misconduct.

In a victim impact statement Mia said she was ‘frightened and embarrassed’ by Masum’s actions which affected her university work.

She said: ‘I’ve never done anything in my life to warrant the police coming to see me

‘I didn’t know who would do this, who was making these false allegations against me. I became suspicious of everyone.’

‘It affected my university work. I was doing my final module of my degree about police work. I always wanted a career with the police.’

Graham Trembath QC, defending, said it was ‘bizarre’ that Masum, a police officer for three years, made ‘absurd, wild and florid’ allegations against someone he had only met three times.

He said: ‘He has a personality disorder – it’s verging on Walter Mitty in many ways. It was nasty and malicious – he knows he is going to prison. 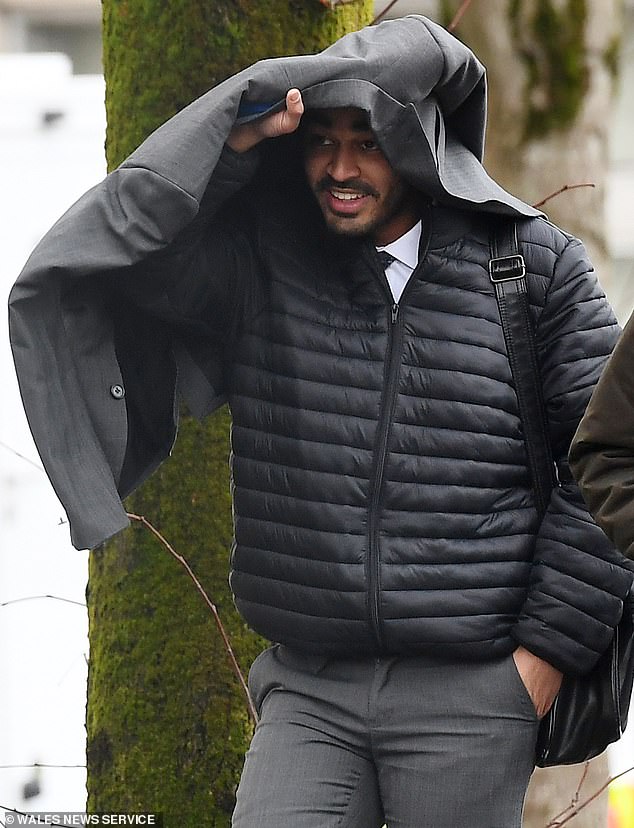 At his trial in March, Masum, of Swansea, was found guilty of two charges of perverting the course of justice and securing unauthorised access to computer material

‘He has lost and destroyed the job he worked so hard to attain – he has thrown that away by his stupid actions.’

Sentencing him at Cardiff Crown Court today Judge Michael Fitton told him: ‘You perceived that you had been in some way spurned by Mia Pitman and took against her.

‘The offences represent a form of harassment in which you took revenge on her.

‘The impact on her and her family have caused her to leave Swansea. There is bad in you that you need to face up to.

‘The conclusion I’ve reached is that your motivation was malice through the medium of false and malicious reports to Crimestoppers knowing the police would have to act on reports of such seriousness.

‘You used your police knowledge of guns and drugs to effectively harass Mia Pitman.

‘You should hang your head in shame – you have done huge harm to the reputation of the police.

‘You should start by recognising what you’ve done and talk to others to get professional help.’

Masum was given a restraining order preventing him from contacting Mia indefinitely.

‘The potential consequences of his actions were extremely serious. ‘Having heard the strength of evidence presented by the CPS, the jury convicted Masum and he has been brought to justice for his grave breach of trust.’