Police have released stomach-churning images of a flat from which they rescued a vulnerable man who was being exploited.

The images were released by police after they rescued the man from an address in Colchester, Essex on Sunday night.

The revolting photos show a fetid bathroom, complete with faeces-stained toilet and a grimy kitchen strewn with rubbish.

Another image shows a disheveled bedroom, piled high with dirty clothing and bedding. 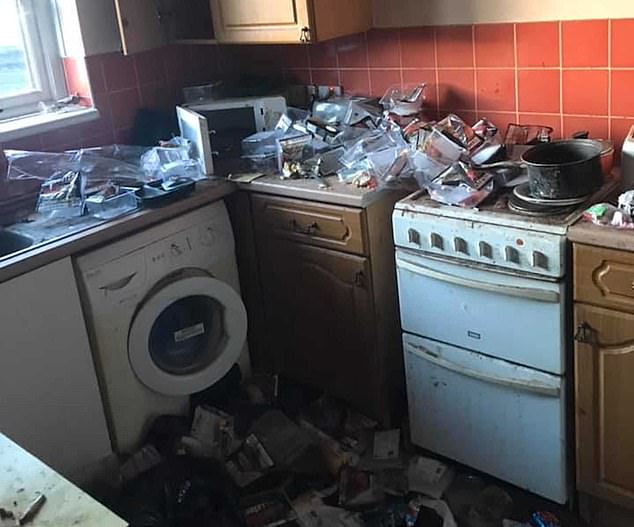 Cigarette butts and beer cans can also be seen littered across the floor.

The distressing photos were shared by Essex Police who urged people to stay vigilant.

They posted the photos with the caption: ‘Officers from Colchester Community Policing Team have this evening arrested two people at an address whilst responding to reports of a vulnerable man being taken advantage of.

‘Safeguarding has been put in place for the man and our partner agencies have been notified so this mess can be cleared.

‘If you have concerns for your neighbour, make sure you tell someone and we’ll do our best to help.’ 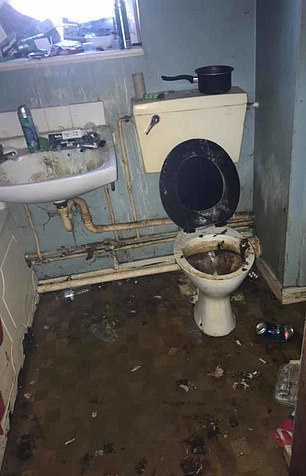 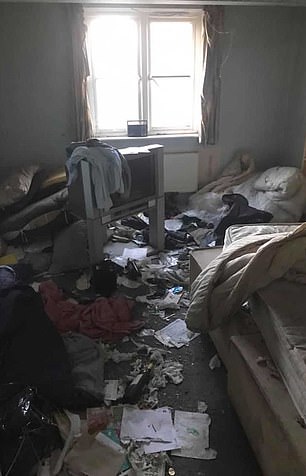 The revolting photos show a fetid bathroom, complete with faeces-stained toilet and a grimy kitchen strewn with rubbish

The shocking photos have sparked an outpouring of sympathy for the man online.

Simon Crow wrote: ‘That is horrific.’

Kerry-Louise Chapman added: ‘Omg. To think people were living in this.

‘Great work by the public too for looking out for others.’

Diana Levrett said: ‘Well done once again bless you all. Oh my goodness!! Gosh I am lost for words!! Unbelievable, you can never imagine this exists.’

And Ann Shears commented: ‘Well done to all officers involved. Hope other people take notice of vulnerable people and keep an eye for anything suspicious and report it.’