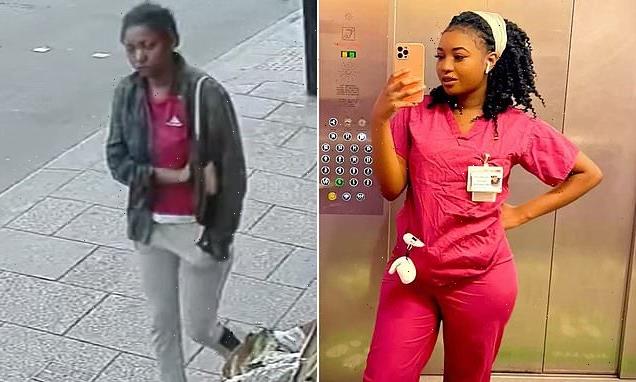 A review carried out by the Met and Essex Police into how they searched for missing nurse Owami Davies over six weeks has cleared them of any racial bias.

The investigation into the two forces’ handing of the case said they did well in updating the family and showing care when they initially found her.

But it also made a number of recommendations on things that could have been done better, including the process how one constabulary handed a case to another.

It also explained that the wrong photo of Ms Davies had been circulated at one point in error because a member of staff fell ill.

The review was also scrutinised by members of the Central Race Independent Advisory Group.

Commander Paul Brogden said: ‘This was the biggest missing person investigation conducted by the Met this year and officers worked tirelessly over several weeks to ensure Owami was found safe and well. 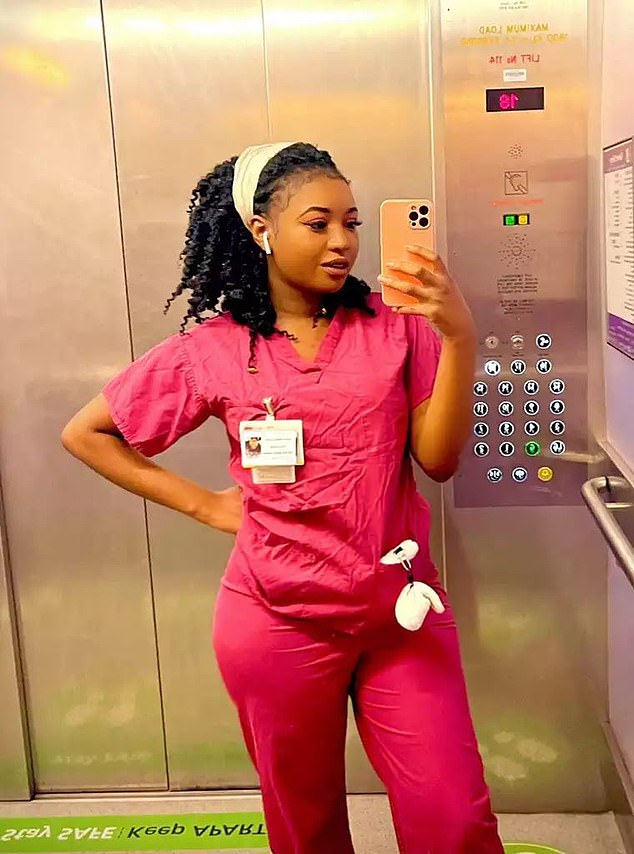 The Metropolitan Police has defended its handling of Owami Davies’ disappearance against suggestions of racial bias, revealing the case was its biggest missing person investigation this year 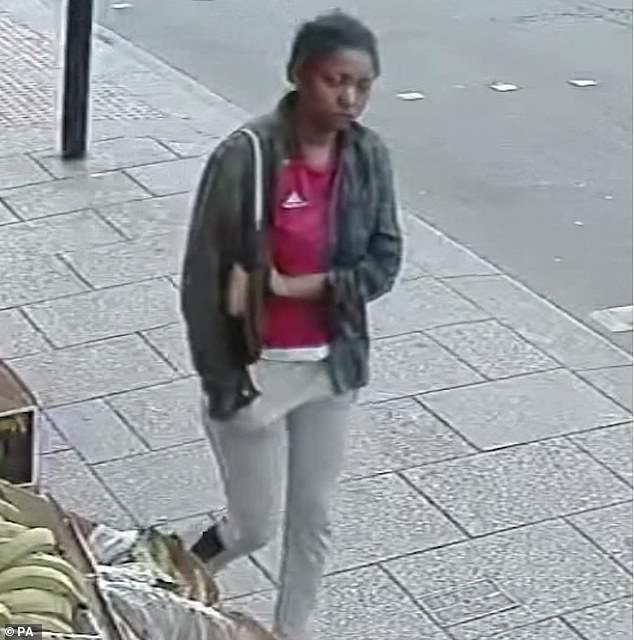 ‘As with any large policing operation, we have worked with our advisory groups to review our actions. I’m pleased that their feedback was largely positive, both about the officers involved and our handling of the investigation.

‘The review did identify some important learning points, including how a missing person enquiry is transferred from one force to another to ensure work isn’t duplicated and any urgent enquiries are carried out as swiftly as possible.

‘The Met received 43,040 missing person reports in the year to May 2022. Each investigation has a unique set of circumstances and requires a proportionate policing response. We will use the findings of this report to improve our service to Londoners.’ 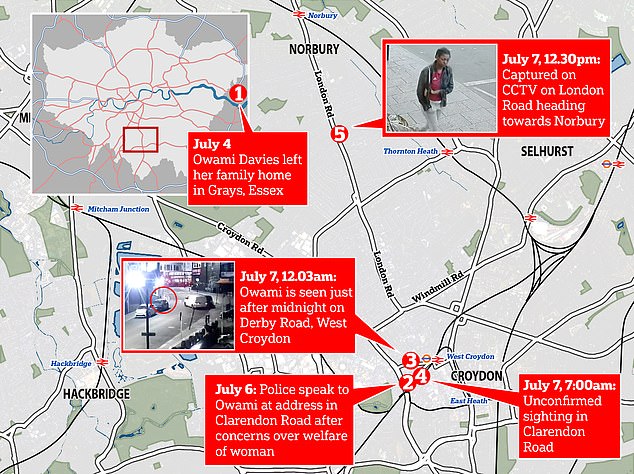 Ms Davies was reported missing just before 1pm on July 6 but it wasn’t until 8.20am the next day that Essex Police officers visited her family home.

The report said it meant that there was a delay in her details to the Police National Computer, which all forces can see.

That meant that when the Met Police were called by a member of the public over concerns over a women on July 6 they did not realise it was her.

The report added: ‘Those involved in the review agreed officers had dealt with Owami compassionately and faced a difficult balance in seeking support for her, while respecting her wish for privacy and request to be left alone.

‘It also confirmed that she had not been circulated on the PNC at the time Met officers spoke with her, meaning they could not have known she had been reported missing.

‘However, as Owami had declined to give her details to those officers, they would in any case not have had sufficient information to properly carry out the PNC enquiry.’

Commander Brogden added: ‘The focus of every missing person investigation is to find the person safe and well.

‘I understand there will be cases that result in significant interest from the public and the media, however we must balance the need for information with the person’s right to privacy. We remain in contact with Owami and her family and we wish them well for the future.’

Timeline of the Owami Davies case

– July 4: Miss Davies leaves her family home in Grays, Essex, telling her mother she is going to the gym.

– July 6: Her family officially report her as missing to Essex Police.

Separately, the Metropolitan Police are called to an address on Clarendon Road, Croydon, to concerns over the welfare of a woman. Officers attend, call the London Ambulance Service and speak to the woman. She tells them she does not want help and leaves the address before the ambulance service can attend. Miss Davies had not been marked as a missing person on the police database at this time and the Met only later establish that the woman was the 24-year-old as a result of their missing person investigation.

– July 16: The force releases a second appeal which it then shares on Facebook three days later.

– July 23: The investigation is officially transferred from Essex Police to the Metropolitan Police after it becomes clear a significant number of inquiries to locate Miss Davies have been in London.

– July 31: The Met Police issue their first appeal for information on her whereabouts – now three weeks after she went missing.

– August 1: The force arrests two men, aged 23 and 27, in the Croydon area on suspicion of murder in relation to the investigation.

– August 2: A third man, 32, is arrested on suspicion of murder at an address in South Croydon.

– August 3: Miss Davies’ mother Nicol Davies appeals to the public, saying: ‘I am begging, I am asking for the public’s help, from the people, to say if you know, if you have heard or seen her, or she passed you, please speak up.’ Speaking at New Scotland Yard, she says her daughter was ‘really happy’, had about two months left of her studies and recently secured a job with Guy’s and St Thomas’. On the same day, a 22-year-old man is arrested at an address in Croydon on suspicion of murder.

– August 5: The Independent Office for Police Conduct receives a referral from the Metropolitan Police Service in relation to the contact officers had with Owami Davies in Croydon on July 6.

– August 6: Police make a fifth arrest as they detain a 27-year-old man on suspicion of kidnap.

– August 9: The Met Police issue an update on the investigation, saying that officers have searched houses and parks, viewed hundreds of hours of CCTV and conducted extensive door-to-door inquiries. The force also reveals that the five men arrested during the course of the investigation have been released on bail.

– August 16: Scotland Yard issue a fresh appeal saying Miss Davies could be ‘in the local area and in need of help’.

– August 18: British Transport Police (BTP) tweet that the 24-year-old could still regularly be taking trains, may appear dazed or confused and may be seeking to engage with women travelling alone. The Metropolitan Police say in a statement: ‘Owami has been depressed and in the absence of her medication may use alcohol to relieve her depression.’

– August 20: The Met Police confirm to the media that their officers came into contact with Miss Davies at the address in Clarendon Road, Croydon, on July 6. The IOPC also confirms it has received a referral over the matter, is assessing the material and is considering whether further action is required.

– August 22: The Met Police there is ‘no evidence that she’s come to harm’ and detectives are ‘still hopeful that we’ll find her alive and well’. They add that she could be sleeping rough. It is confirmed that she has no money left on her Oyster card, used to pay on public transport, and no access to her phone or bank cards.

– August 23: Owami is found safe and well in Hampshire

– August 24: The IOPC confirms it is taking no further action against the Met after a referral was made

– August 25: The Met defends its handling of the case against suggestions of ‘racial bias’

– September 30: Review into the case clears Essex and Met Police of any suggestion of racial bias