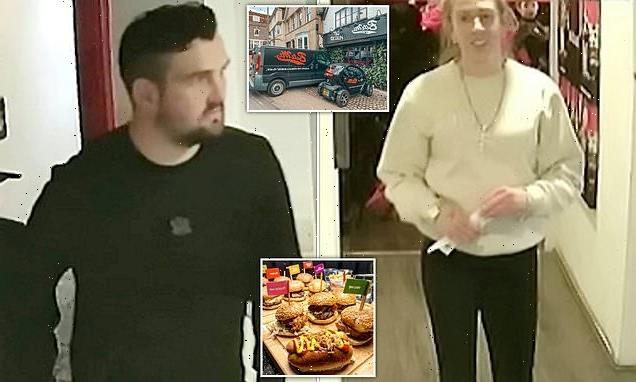 Hunt for the real-life hamburglars: Police release CCTV as they search for greedy couple who scoffed 12 burgers in SIX MINUTES and then left without paying £174 bill

Police are hunting ‘Britain’s greediest couple’ who scoffed twelve burgers in six minutes then refused to pay – claiming they had completed an ‘eating challenge’.

The pair walked into ‘Bite Me Burger’ in Marlborough in Wiltshire and asked if they could do its burger challenge.

The restaurant offers customers the chance to try and eat a dozen burgers in six minutes – for free if they do it in time.

But staff explained the challenge wasn’t available as it had to be prebooked.

Staff say the couple then ordered the twelve burger for their party – ate them all then refused to pay saying they had completed the challenge anyway.

Marlborough police have now issued CCTV images of a male and female who they are hoping to speak to about the incident on February 5.

Marlborough police have now issued CCTV images of the man and woman, who they are hoping to speak to about the incident on February 5

The police are treating the incident, which occurred at Bite Me Burger restaurant, as theft.

Simon Wetton, the owner of the Kingsbury Street restaurant, said that he is owed £174 by the diners.

He said: ‘We do something called the burger challenge, which is that if you can eat 12 burgers in six minutes then the bill is on us.

‘But to do the burger challenge it has to be pre-arranged as we have to be on-hand to time it properly. 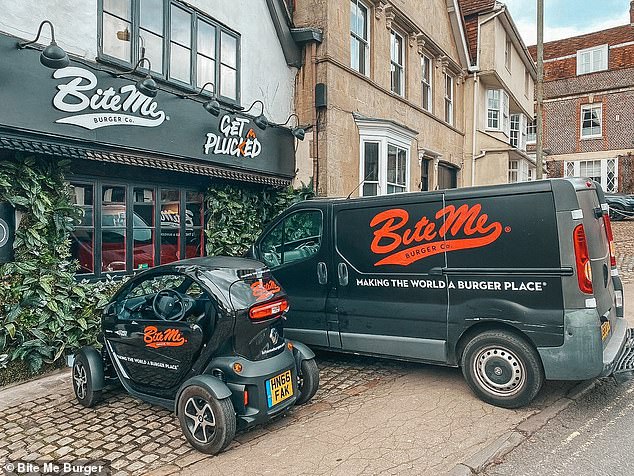 The pair asked staff in ‘Bite Me Burger’ in Marlborough in Wiltshire and asked if they could partake in the challenge which lets customers try to eat a dozen burgers in six minutes; for free if they do it in time

‘These people said they wanted to do the challenge but it was Saturday night, we were very busy and we didn’t have the staff and time to time it, it’s meant to be pre-arranged, so we said that unfortunately, they couldn’t do the challenge.

‘They still ordered 12 burgers and said they wanted to do the challenge. We explained that sorry, that was just not practical.

‘But when it came to pay they said they had done the challenge in six minutes and would not pay for the burgers, the bill was on us.

‘Staff again explained that it had to be timed by us. They argued with the waitress about this, she went to get the manager and by the time he arrived they had walked out.

‘So I rang them and said look you owe me this money, please come back and pay it and they hung up on me, after saying they were going to slag off the restaurant on social media.’ 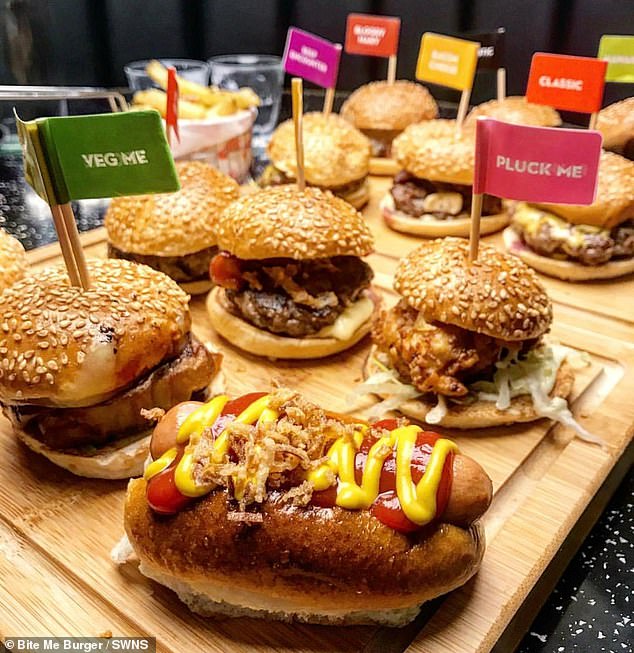 Although staff this wasn’t available as it had to be prebooked, the couple ordered twelve burgers

He added: ‘As it happens, I could see from the CCTV footage that it is crystal clear that they didn’t eat the burgers in six minutes, even though it was not pre-arranged.’

Mr Wetton reported the incident to the police, who said in a statement: ‘We are now investigating this as theft and would ask anyone with information to call us on 101, quoting reference 54220012944.’

Mr Wetton admitted: ‘I don’t want to waste police time or that of the courts but, on top of all that restaurants have gone through with the lockdown, this is a matter of principle and people should not be allowed to get away with it.’