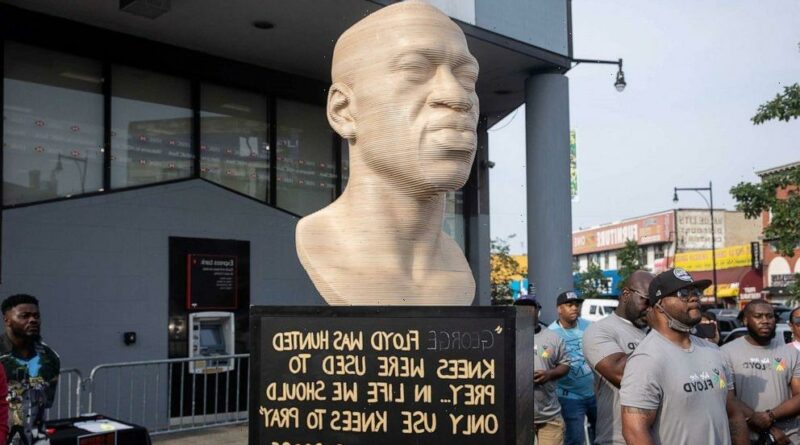 Less than a week after a statue of George Floyd was erected in Brooklyn, New York City on Juneteenth, the monument has been vandalized with an alleged white supremacy marking.

Four unidentified individuals allegedly used black spray paint to deface the monument and cover the text on its pedestal at 3:40 a.m. on Thursday, just five days after it was unveiled.

On the statue’s pedestal, white spray paint was used to leave the stenciled mark of Patriot Front, deemed a “white nationalist hate group” by The Southern Poverty Law Center, which tracks extremism in the United States.

After vandalizing the monument, the four men fled on foot, police said.

The New York City Police Department’s Hate Crimes Task Force released photos and video of the suspects, seen wearing hoodies or hats and their faces covered with scarves, asking for the public’s help in identifying and locating them.

The 6-foot statue of Floyd was unveiled in the Flatbush area of Brooklyn on Saturday to celebrate Juneteenth. It was set to be displayed at the Brooklyn location for two to three weeks before moving to Union Square in Manhattan.

Gov. Andrew Cuomo announced an investigation into the defacing of the statue Thursday, saying, “To the group of neo-Nazis who did this, I want to be absolutely clear: get the hell out of our state.”

“It’s only been five days, and it’s very disheartening,” Nelson said to local ABC station WABC. “And it’s disgusting and it’s sad and it’s cowardly. And they did it like a thief in the night. But you can’t stop us.”

The vandalism came about a day before former Minneapolis police officer Derek Chauvin, who was convicted in Floyd’s death in April, is set to be sentenced Friday.

Anyone with information in regard to this incident is asked to call the NYPD’s Crime Stoppers Hotline at 1-800-577-TIPS (8477) or for Spanish, 1-888-57-PISTA (74782). The public can also submit their tips by logging onto the Crime Stoppers website at WWW.NYPDCRIMESTOPPERS.COM, or on Twitter @NYPDTips.