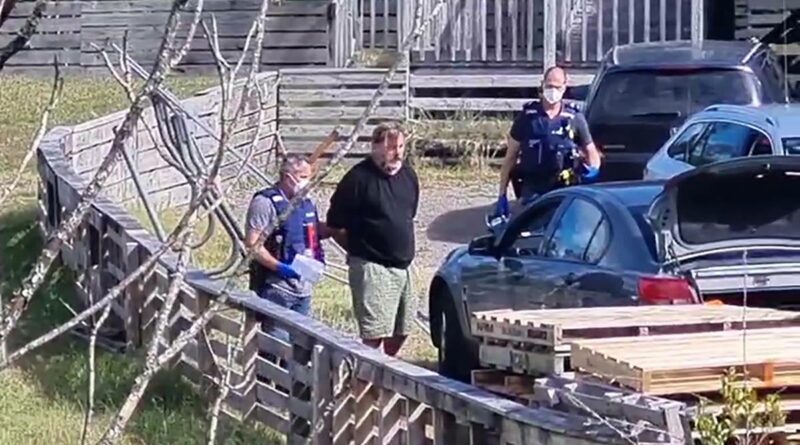 A man on the police national watch list after allegedly making death threats against Prime Minister Jacinda Ardern is in custody after armed officers placed him in handcuffs at a rural Bay of Plenty property.

Richard Sivell tracked the arrival of police and his arrest through a series of posts to a Telegram chat group by himself and supporters.

It was the same social media account carrying Sivell’s name that was used to make what could be considered to be threats to kill the Prime Minister and a number of journalists.

One of those journalists was a Herald reporter and recent information from police identified Sivell as someone on a national watchlist.

A spokeswoman for police said a search warrant was presented at the Te Puke rural address this morning.

“During this operation, a man refused to leave the premises and was arrested. He is due to appear in Tauranga District Court on April 4 on charges that include obstructing Police.”

In audio messages to the Counterspin channel on Telegram, Sivell has used an account in his own name to say of government politicians: “They are going to die. We are not going to allow them to share this world with us anymore. Same as Jacinda. She is going to die. Execute these motherf***ers. I look forward to hearing their necks snap.”

The Telegram social media channel has become a popular alternative for anti-vax and other groups opposed to public health measures after a number were banned from mainstream apps. It has become a popular channel for far-right groups and extremists including Islamic State.

The account with Sivell’s name was a regular commenter on the forum operated by Counterspin, an online show that purports to present news but promotes false information about Covid-19 and public health responses.

It was the same account and forum to which Sivell reported police interest this morning with an audio message.

Sivell’s message announcing police said: “The pigs are up here.” He then gave the address of a rural Bay of Plenty property. “They turned up first thing this morning – four masked goons. They tried to detain me and steal my property.

“I managed to fend them off and got in touch with a couple of people. They produced some f***ing bullshit paperwork saying there was a search warrant. It was not signed by a judge. I asked him to leave it. He didn’t leave it.

“They’ve been f***ing harassing me and they’re staking me out at the moment up on top of the road.”

Sivell asked for anyone in the Tauranga area to come to the address and “help me out”.

It brought a degree of support from the Counterspin community including one person who said Sivell had been present during the protest outside Parliament.

The audio message was followed by video from people who responded to Sivell’s call for assistance. The video showed a number of armed police outside a rural property.

Then a supporter posted a recording of a phone conversation with Sivell, which he said he had been given permission to put online.

“I don’t even know why they are persecuting me,” Sivell told the supporter. “I was told that they received a complaint from something I said online. They are going to all this effort against me just because I have an opinion. I haven’t broken any laws.”

Sivell said he wasn’t going to let police in and hadn’t had a chance to properly view the search warrant. “I’ve just got up and locked the door,” he said. “Then they said they were going to smash their way in.”

Sivell said police had spoken to him for an hour before agreeing to retreat back to the roadside.

“I’m pretty scared bro,” he told his caller. “I don’t know why it justifies this sort of behaviour. They have been looking for me for a long time just because I have a loud voice and an opinion.”

Sivell said the property at which he was living was registered as being owned by the Ministry of Education but he had claimed “allodial title”, an archaic law denoting property that had no owner. It is a popular claim among the sovereign citizen movement of people who believe each person is subject only to the laws they choose to acknowledge.

“You don’t need to explain anything to me. Just put it under the wheel of the vehicle and I’ll come and get it and have a read of it myself.”

A minute later, sounds of an altercation could be heard over the phone line along with a dog barking. A voice can be heard calling: “On the ground”, while Sivell is heard shouting: “F*** off. Leave me alone.”

Sivell’s regular interaction on the Counterspin channel included messages in which he spoke directly at Kelvyn Alp, the person who fronted the channel and has called for the overthrow of the government in New Zealand.

In Sivell’s messages, he used “Jezebel” to refer to Ardern. In one that praised Counterspin host Shane Chafin after an infamous incident in which he heckled the Prime Minister at Kawakawa, Northland. It was an incident highlighted of far-right and anti-vax channels around the world, including being featured by podcast host Joe Rogan.

In that Telegram audio message, Sivell said: “When you exposed that bitch Jezebel you got international recognition – you went global.”

And in another message, he said: “We are going to hang you Jezebel. You are such an evil c**t. I curse you to hell. I look forward to hearing your neck snap.”

In messages posted by Sivell, he makes reference to holding trials he aligned with those held at Nuremberg after World War II.

Calls for “Nuremberg 2” trials are popular among groups opposing public health measures including vaccines and have seen photographs distributed showing rows of people hanging dead. The idea is based on the belief that Covid-19 vaccine rollouts – a primary tool in combating the pandemic – are violations of human rights.

In 2020, Stuff reported Sivell had come to police attention after harassing a South Waikato District Councillor who had fled East Germany in the 1980s. Sivell, who was working in Tirau at the time, distributed flyers in which he called councillor Peter Schulte a “Nazi immigrant”.

He also sent text messages, including one that said: “I’m coming for you Peter, this is not Nazi Germany, we are Anzacs, watch the wrath of God fall upon you”.