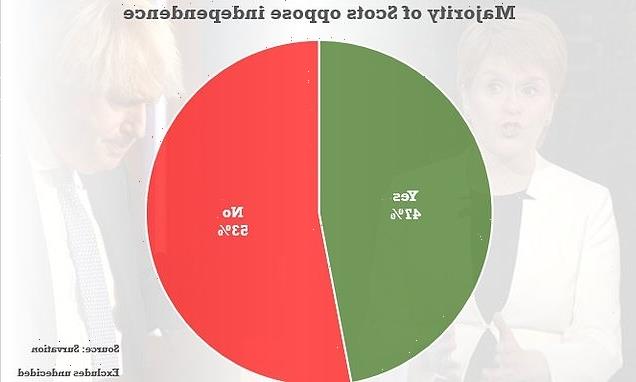 Nicola Sturgeon suffered a blow today as a poll found support for independence falling with a majority of Scots wanting to stay in the UK.

Research by Survation found 53 per cent would vote ‘no’ in a separatist referendum, excluding those who said they were undecided.

The figure was up a point on last year, with trackers showing unionists consistently ahead on the question.

The findings emerged as the Scottish Tories urged voters to ‘send Nicola Sturgeon a message’ in local elections next month by keeping the SNP out of power in more than a dozen key areas.

Writing in today’s Scottish Daily Mail, Scottish Conservative leader Douglas Ross issued a rallying cry to voters, telling them they can protest against a series of failings and ‘help us knock the Nats down to size’. 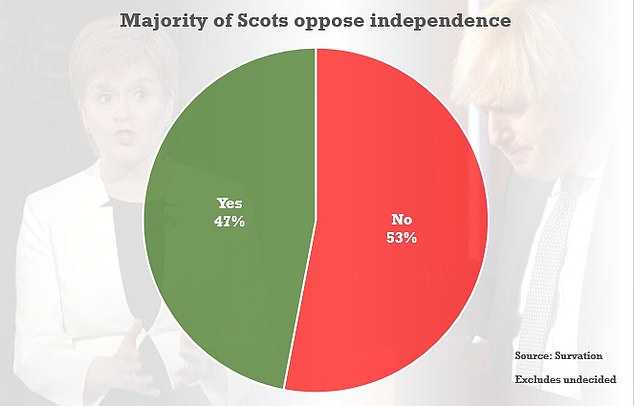 Research by Survation found 53 per cent would vote ‘no’ in a separatist referendum, excluding those who said they were undecided

He condemned Ms Sturgeon’s ‘narrow-minded obsession with splitting us apart’, plans to introduce the hated workplace parking levy, growing problems with potholes and bin collections, and a controversial sex survey introduced in schools.

However, the Survation poll – carried out between March 24 and 28 – had a sting in the tail for the Tories, showing them slipping to third place behind Labour on Holyrood and Westminster voting intentions.

The poll, carried out between March 24 and 28, recorded the SNP on 46 per cent on the Holyrood constituency vote, down two percentage points on last year’s elections, with Labour on 25 per cent (+3), the Tories on 20 per cent (-2), and the Lib Dems on 7 per cent (unchanged).

Mr Ross said: ‘One month from today, across Scotland, you will have the opportunity to remove the SNP from power. The prize is there for the taking. The SNP are beatable.

‘In local election results since the Holyrood vote last year, we’re only a few hundred votes behind them across Scotland. On May 5, in councils across the country, this election is a two-horse race.’

The 14 councils where Tories believe the SNP can be defeated include ten where Conservatives got a higher percentage of the vote in 2017.

They say just a few seats changing hands in Dumfries and Galloway and South Ayrshire would allow for a majority to remove the SNP/Labour coalitions. They believe gaining a couple of seats in Moray could oust the SNP. 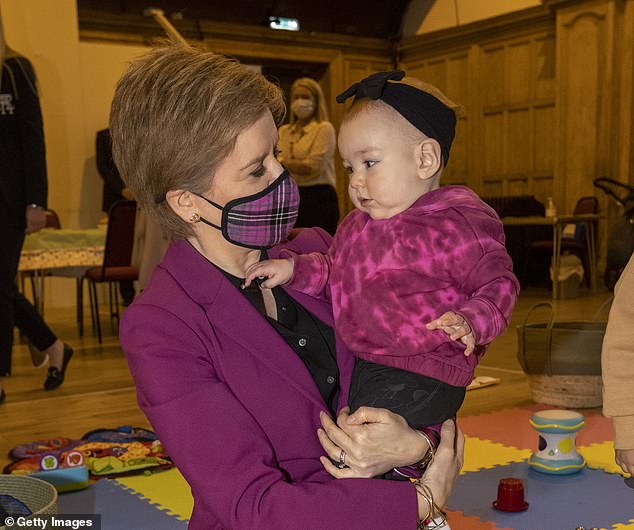 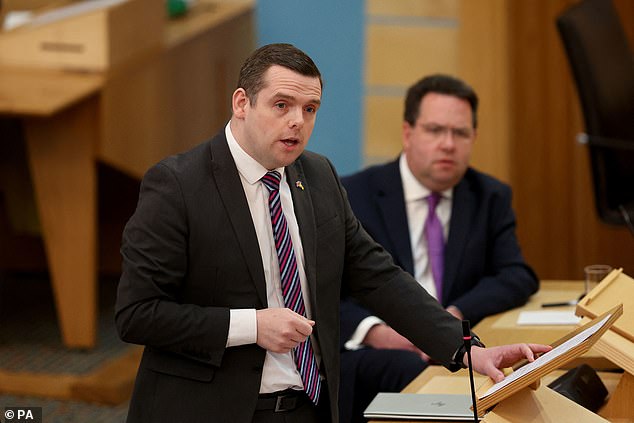 Scottish Tory leader Douglas Ross has been urging voters to ‘send a message’ to the SNP, but he is in isolation after testing positive for Covid

In four other areas – Argyll & Bute, Midlothian, North Ayrshire and East Dunbartonshire – Tory strategists believe a swing of between one and three seats could allow them to overtake the SNP as the largest party.

On the campaign trail yesterday, Ms Sturgeon highlighted her government’s decision to double the Scottish child payment to £20 per week, saying campaigners called it ‘game changing’ in the fight against child poverty.

She told LBC: ‘It is the most significant anti-poverty measure that we are introducing.’

Scottish Labour leader Anas Sarwar said: ‘Every single Scot is living through the cost of living crisis and yet neither of Scotland’s Governments are doing anywhere near enough to help.’

Mr Ross suffered a further election setback yesterday as he was forced to self-isolate after testing positive for Covid.