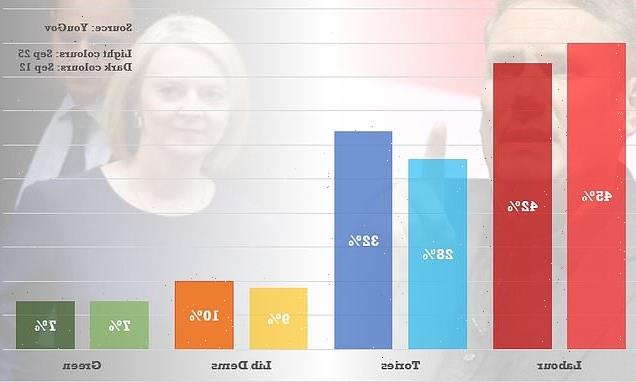 A shock poll showed Labour 17 points ahead of the Tories today as Keir Starmer prepares to deliver his keynote speech to conference.

The advantage in the YouGov research was the biggest the firm has found, suggesting Sir Keir’s party is on track for victory at the election – albeit still potentially two years away.

Shadow cabinet ministers have been privately jubilant in Liverpool, claiming ministers have played into their hands by cutting taxes for the wealthy and boasting that they are ‘twiddling our thumbs’ because the threat from the hard-Left has disappeared.

One told MailOnline they now expect to ‘win big’ at the election, gloating that the Conservatives are ‘f***ed’ in the Red Wall.

In his address to activists this afternoon, Sir Keir will quote Mr Blair saying Labour is the ‘political wing of the British people’. 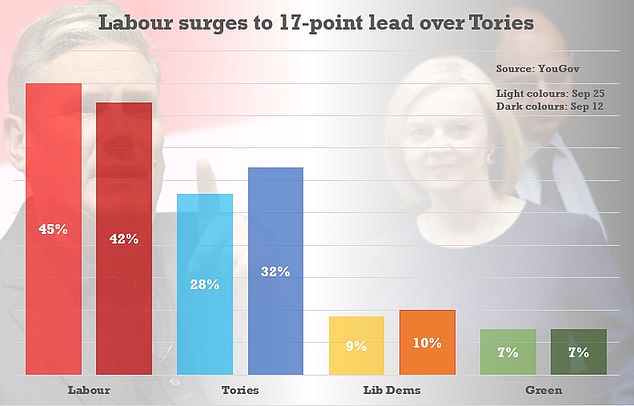 The advantage in the YouGov research was the biggest the firm has found, suggesting Sir Keir’s party is on track for victory at the election – albeit still potentially two years away 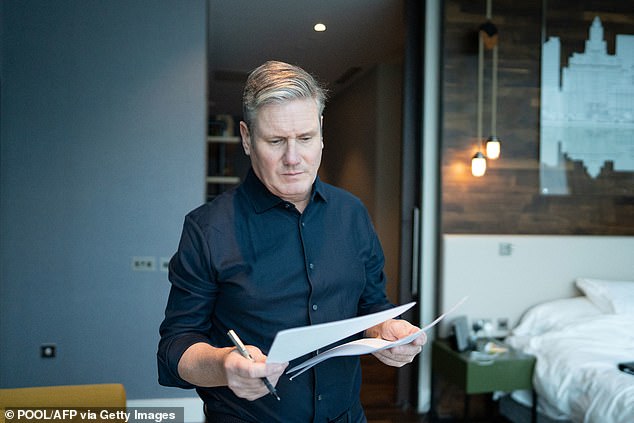 Labour leader Sir Keir Starmer speaks on day two of the Labour Party Conference in Liverpool. He will try to present himself as the heir to Tony Blair – and claim Labour is now the party of economic credibility

Sir Keir will try to exploit turmoil in financial markets arguing the Government has ‘lost control’ of the economy.

He will say he is ready to ‘fight the Tories on economic growth, with Labour now the party of ‘sound money’.

A Labour spokesman said the party would ‘go into the next election as the guardian of fiscal responsibility’.

Sir Keir will pledge to make the UK a ‘growth superpower’, saying his plans for a green revolution would create a million jobs and tackle climate change.

And he will signal that Labour is ready to extend its energy price freeze beyond its current six-month lifespan, adding: ‘We should never be left cowering in a brace position, worrying about how to get through a winter. It’s time for Britain to stand tall again.’

A Labour source dismissed the idea that Sir Keir believed he was on course for a 1997-style landslide at the next election. But the insider added: ‘He wants to be the next Labour leader to take the party from opposition to government. Tony Blair was the last person to do that.’

In a round of interviews, shadow health secretary Wes Streeting accused Liz Truss and Chancellor Kwasi Kwarteng of taking a ‘reckless gamble’ rather than showing ‘serious leadership’.

‘The cavalry is coming with Labour,’ he told Sky News.

YouGov polling for the Times conducted over the weekend put Labour on 45 per cent with the Tories on 28 per cent – the greatest lead since the firm began polling in 2001.

He said Sir Keir needs to ‘turn the anger and frankly disgust with the Conservatives into a positive appetite for Labour’.

But Labour’s economic credentials risked being undermined last night after shadow chancellor Rachel Reeves revealed union leaders would be given a role in setting economic policy. She wants to appoint them to a new national economic council sitting alongside figures from industry.

Revealing her plans, Ms Reeves said: ‘I would bring together a national economic council that will bring together industry and trade unions, so working people and businesses were at the heart of economic decision-making.’

A Labour source said unions would have an ‘advisory’ role only.

The move will raise fears of a return to the ‘beer and sandwiches’ approach of the 1960s and 1970s which saw union leaders gain ever more control over economic policy. And it will raise eyebrows at a time when unions in a range of industries are pushing for strike action.

Dave Ward, general secretary of the Communication Workers Union, yesterday offered to give Sir Keir a ‘bacon butty’ if he visited striking postal workers on the picket line.

‘Keir, if you believe in the sovereignty of this country, don’t worry too much about whether people sing the national anthem, get out there, show your support that you’re going to save the Royal Mail,’ he said.

In a sign of the unions’ continuing influence over Labour, Ms Reeves yesterday paved the way for the introduction of a higher minimum wage.

Unions are pushing for the legal minimum to be increased to £15 an hour from its current rate of £9.50, despite warnings it could cost jobs and saddle public services with huge additional wage bills. The Shadow Chancellor declined to set a target for the new wage, but said it should ‘reflect the real cost of living’. 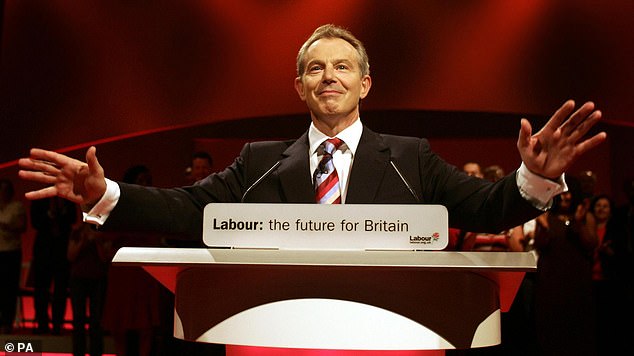 In his address to activists this afternoon, Sir Keir will quote Tony Blair saying Labour is the ‘political wing of the British people’

She said her first act in government would be to write to the Low Pay Commission telling it to set the minimum wage at a level that reflects living costs.

The shadow chancellor also pledged to reinstate the top rate of tax, and use the £2billion in revenues to increase NHS staffing. Chancellor Kwasi Kwarteng scrapped the tax rate of 45 per cent on earnings above £150,000 last week, giving around 660,000 high earners an average tax break worth £10,000.

Ms Reeves said Labour would ensure the better off pay their ‘fair share’ by restoring the tax.

She said the cash raised would allow the NHS to double the number of district nurses qualifying every year, train more than 5,000 health visitors and create an extra 10,000 nursing and midwife placements every year.

But, despite criticising the Government’s decision to pay for the tax cut with borrowing, she indicated the extra money for the NHS would also be borrowed rather than raised elsewhere.

She claimed it was only the scale of state borrowing that had ‘spooked the markets’.

‘When I set out my fiscal rules last year I said that in emergency situations – and we are absolutely in a national emergency at the moment – you can borrow and the Government is borrowing, it’s the scale of the borrowing,’ she said.