Washington: Secretary of State Mike Pompeo on Monday launched a sweeping broadside against the Iranian government, vowing to use all US economic and military might to destroy its economy and "crush" its operatives and proxies around the world.

In his first major foreign policy address as secretary of state, Pompeo listed a dozen demands, an agenda encompassing Iran's foreign ventures as well as its nuclear and missile programs. If Iran agrees to those demands, he said, the United States would lift all sanctions, reestablish diplomatic relations with Tehran and provide it access to advanced technology. 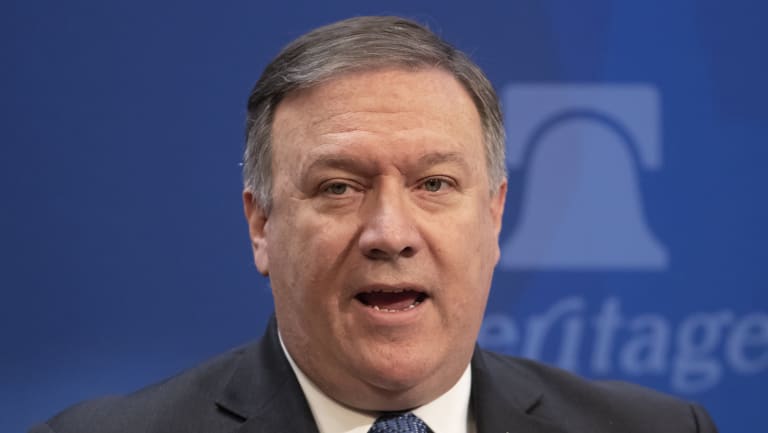 Secretary of State Mike Pompeo is threatening to place “the strongest sanctions in history” on Iran.

"Who are you to decide for Iran and the world?" he was quoted saying by the Iranian news agency ILNA. "The world today does not accept America to decide for the world, as countries are independent,"

Declaring the era of US domination "over," Rouhani added, "We will continue our path with the support of our nation."

The suggestion of a further US military role in the region was striking, since President Trump has said he seeks to draw down the US troop presence in Syria, where Iran provides training and arms to militiamen.

Colonel Rob Manning, a Pentagon spokesman, told reporters the military is looking at potential actions to push back against Iran's regional military influence as part of a larger US government response. He said the United States would take "all necessary steps" to contain Iran, but declined to provide specifics.

State Department officials say the aim of the speech is to outline a path forward after Trump announced he would withdraw the United States from the 2015 landmark nuclear deal with Iran and reimpose sanctions, a decision that immediately puts the United States in breach of its commitments. 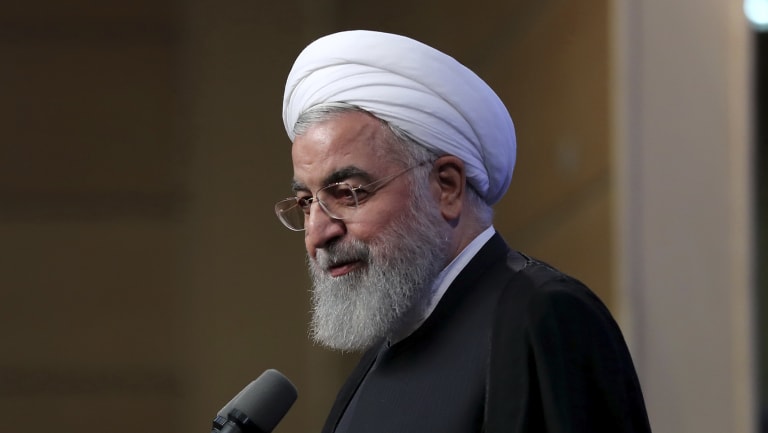 The Treasury Department already has reimposed sanctions on the head of Iran's Central Bank and other companies and groups.

"The Iranian regime should know that this is just the beginning," Pompeo warned.

"After our sanctions come into full force, it will be battling to keep its economy alive," he added. "Iran will be forced to make a choice: either fight to keep its economy off life support at home or keep squandering precious wealth on fights abroad. It will not have the resources to do both."

Many European officials, including those who negotiated the Iran agreement alongside the United States, have chafed at the Trump administration's positions on Iran, the Paris climate accord, moving the US Embassy in Israel to Jerusalem, and trade tariffs. "With friends like that, who needs enemies," European Council President Donald Tusk groused recently. 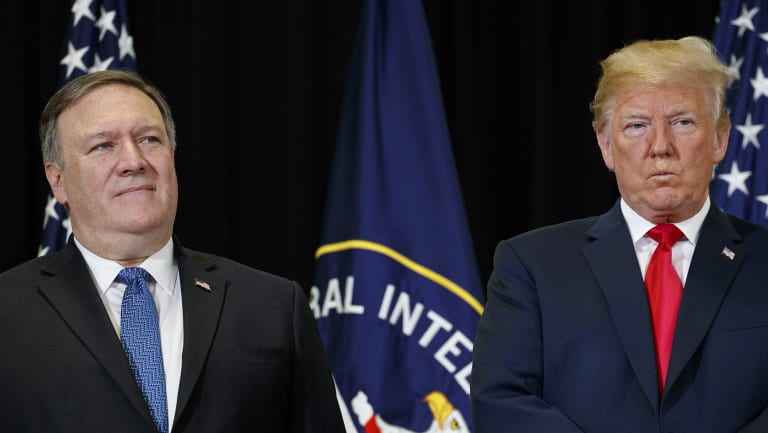 The new secretary of state, now in his fourth week in office, made clear that the United States is prepared to square off with Europe, using secondary sanctions against companies that do business in Iran.

"We understand our re-imposition of sanctions and the coming pressure campaign on the Iranian regime will pose financial and economic difficulties for a number of our friends," Pompeo said. "But you should know that we will hold those doing prohibited business in Iran to account."

In negotiating the Iran deal, the Obama administration also started with a long list of demands. But they made concessions along the way on issues they considered less important than the goal of setting future limits on Iran's nuclear deal and getting international inspectors to monitor it.

"The list of requirements of the Iranians asks for everything but conversion to Christianity and reads more like a demand for unconditional surrender than an actual attempt at negotiation," said Jeremy Shapiro, research director at the European Council on Foreign Relations.

Pompeo said the administration is seeking a full treaty with Iran, not just "fixes" to the nuclear deal, formally known as the Joint Comprehensive Plan of Action. Rather, he demanded Iran's complete capitulation on 12 points. Judging by its reaction to similar proposals made previously, Tehran is likely to reject most, if not all.

Among the items on Pompeo's wish list is a full acknowledgment of Iran's previous attempts to develop a nuclear weapon. Iran has denied ever wanting to build nuclear arms. US negotiators tried unsuccessfully to get Iran to admit it tried to build one in the early 2000s.

Other demands the Iranians are unlikely to go along with include stopping uranium enrichment and ballistic missile tests, and allowing international inspectors access to all sites, including military locations where critics suspect clandestine research. Currently, inspectors must outline the basis for their suspicions.

The one demand that Iran could theoretically assent to is the release of all US citizens imprisoned on a variety of charges, as well as citizens of countries allied with the United States such as France and Britain. At least six Americans are imprisoned or unaccounted for, and they are widely considered to be bargaining chips.

"This will only lead to one thing: confrontation," he said. "And one cannot help but think that is the strategy and the goal."

Pompeo stopped short of calling directly for regime change, but he urged Iranians to think of Rouhani and Foreign Minister Javad Zarif as part of a corrupt, venal and dangerous regime. Previous US officials and the Europeans consider them relative pragmatists who are less dogmatic than the radical theocrats.

"The West often treats President Rouhani and Foreign Minister Zarif as 'apart' from the regime's unwise, terrorist, and malign behaviours," Pompeo said, speaking directly to the Iranian people. "Yet, Rouhani and Zarif are your elected leaders. Are they not the most responsible for your economic struggles? Are these two not responsible for wasting Iranian lives through the Middle East? It is worth the Iranian people considering."