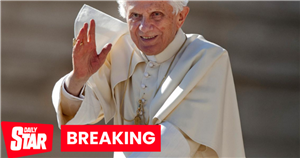 Former Pope Benedict XVI has died aged 95 just hours after the Vatican said he was in a "stable" condition.

The German-born Pope who followed John Paul II after his death, passed at 9:34 AM in his residence at the Vatican's Mater Ecclesiae Monastery.

The current Pope, Pope Francis, had urged the world to pray for the former pontiff at the end of his general audience on Wednesday morning.

Reports stated that his health had deteriorated overnight and the Vatican this morning (December 31) confirmed that the Pope Emeritus, as he was known after stepping down, had died.

Just yesterday, the Vatican said Benedict XVI was able to have a good rest, and earlier in the afternoon he had participated in the celebration of Mass in his room.

Prior to confirmation of his death, Pope Francis said: “I would like to ask all of you for a special prayer for Pope Emeritus Benedict, who, in silence, is sustaining the Church.

“Let us remember him.

“He is very sick, asking the Lord to console and sustain him in this witness of love for the Church, until the end.”

Catholic Archbishop of Westminster said Benedict would be remembered as "one of the great theologians of the 20th century".

"When he came to this country in 2011 he was described as 'God's Rottweiler', but by the time he left I think he was considered to be everybody's great uncle," he said.

Benedict was the first pope in 600 years to resign from the role in 2013. He was still living in the Vatican at the time of his death.

In 1977 he was appointed as the Archbishop of Munich and Freising, and was made the 265th pope at the age of 78.

Ratzinger chose the pontifical name Benedict, which comes from the Latin word meaning "the blessed", in honour of both Benedict XV and Benedict of Nursia.

He resigned from the role in February 2013 due to his age, and stated that he would continue to service the church “through a life dedicated to prayer”.

No details on what will happen for his funeral have been announced, and, according to reports, there is no protocol for how to handle the death of a former Pope who died when he was no longer pope.