Pope Francis concludes landmark three-day visit to the UAE by holding mass attended by around 135,000 Catholics. 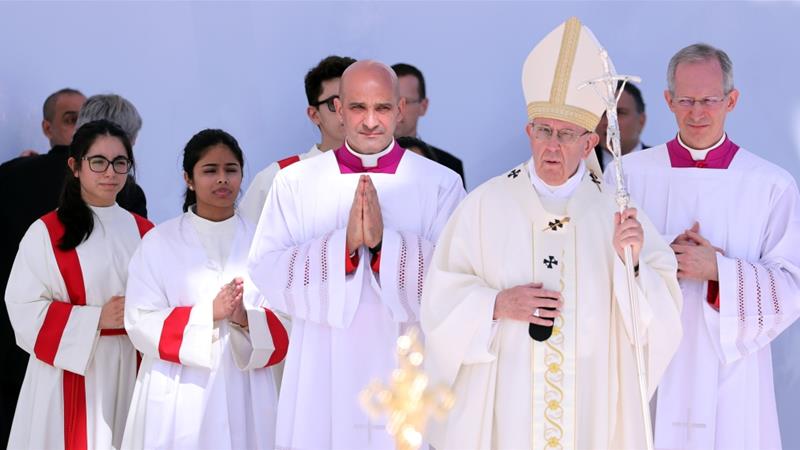 Pope Francis has held the first Papal Mass at a stadium in Abu Dhabi, the first time the pontiff visited the Arabian Peninsula.

About 135,000 Catholics attended the mass on Tuesday with some carrying Vatican flags and banners as the pope drove into Zayed Sports City Stadium, where an altar with a large cross was set up for the open-air service.

Cheers erupted inside and outside the stadium as Pope Francis arrived and moved through the crowd in his open-sided popemobile before the mass. Chants of “Viva il Papa” and “We love you” accompanied him as he waved to the crowd.

Francis, who has made outreach to Muslim communities a cornerstone of his papacy, is on an historic three-day visit to the United Arab Emirates.

The mass celebration is being billed as the largest show of public Christian worship on the Peninsula.

“We have to say it is really a big event for us which we never expected,” said Sumitha Pinto, an Indian native who has lived in the UAE for nearly 20 years.

Out of the roughly nine million people living in the UAE, the Catholic Church estimates as many as one million are Catholic.

The mass celebration comes a day after making a broad appeal for Christian and Muslim leaders to promote peace and reject war.

At an interfaith meeting on Monday, Pope Francis and Sheikh Ahmed al-Tayeb – the grand imam of Egypt’s Al-Azhar – signed a joint statement on “human fraternity” and their hopes for world peace.

Francis said that faith leaders have a duty to reject war as he called for religious freedom in the Muslim-majority region.

Advocacy group Human Rights Watch (HRW) had urged the pope to use his visit to the UAE to highlight abuses it said are currently being carried out in the Gulf state.

According to the group, UAE authorities have targeted critics, political dissidents and human rights activists with arbitrary detention and enforced disappearances.

The UAE is also involved in wars in Yemen, Syria and Libya.

The United Nations calls Yemen the world’s worst humanitarian crisis. It was triggered by the intervention of Saudi Arabia, the UAE and their allies in a war between the government and Houthi rebels.

The country is also among a blockading quartet in the region. Along with Saudi Arabia, Bahrain and Egypt, the UAE severed diplomatic and trade ties with Qatar in June 2017, accusing it of backing “terrorism” – allegation Doha strongly denies.

Meanwhile, secretary-general of the International Union of Muslim Scholars, Sheikh Ali al-Qaradaghi, a Doha-based body, said that while the union supports dialogue and interfaith dialogue, the pope’s visit to the UAE may be interpreted as an endorsement for human rights violations and despotism.

The union joined other rights organisations in calling on the pope to demand the release of prisoners, end its involvement in regional wars, and lift the siege imposed on neighbouring Qatar.