A Portland police sergeant was sent to the hospital and at least 24 people were arrested after demonstrators gathered outside the police union building late Monday and into early Tuesday.

Demonstrations, which have often devolved into riots, have continued in the city for more than 120 days.

This time, five police officers were also sprayed with chemical irritants by demonstrators who first engaged in an unlawful assembly late Monday in the Kenton Neighborhood before marching toward the Portland Police Association headquarters. The sergeant sent to the hospital was punched in the face. 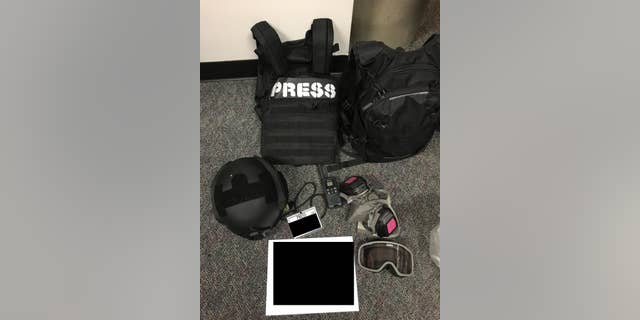 The Portland Police Bureau released photos showing the gear demonstrators were wearing at the time of their arrest.

The Portland Police Bureau learned about an unpermitted march set to begin in Kenton Park around 8:45 p.m. Monday, and officers observed many people in the crowd carrying shields and wearing body armor and helmets. Because the “posture of the gathering suggested that it would become violent,”  the bureau said officers moved in to the park and seized shields to “lower the likelihood that members of the gathering would use the shields to protect those intent on committing crimes such as throwing objects at police.”

A silver Subaru sedan, marked with a red cross, signaling it was being used as an amateur medic transport, was spotted driving dangerously in the area and officers conducted a vehicle stop. A loaded handgun was found inside, and the driver was cited for driving uninsured and without a seat belt and failing to signal a turn. The investigation into the firearm is ongoing. 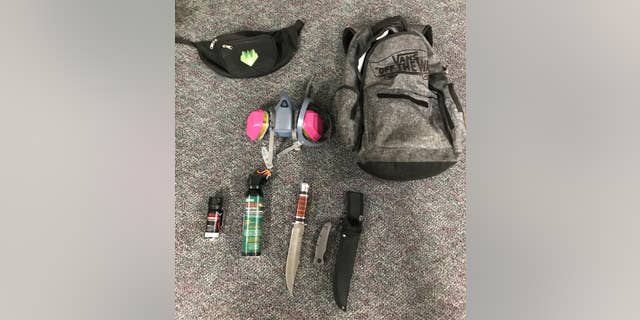 The Portland Police Bureau said those arrested were armed with knives and "OC" spray.

Police arrested some in the crowd who interfered while they were “performing their lawful duties,” and officers then disengaged from the park, despite being pelted with water bottles, the bureau said in a press release. Officers warned the crowd via loudspeaker they were still welcome to demonstrate in the park but did not have a permit to march through the street.

Ignoring the warning, the bureau said demonstrators marched toward the offices of the Portland Police Association, which “have been the focus of numerous violent and destructive protests in recent months.”

In the past, police said “individuals operating within large scale demonstrations have burglarized the building, set arson fires, cut the power to the building, broke windows, and caused other destruction. Several of those incidents devolved into riots where officers were forced to deploy tear gas and other munitions to move the violent and destructive crowd away.” 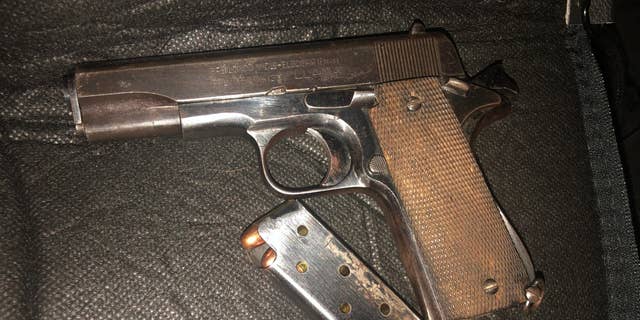 A handgun was found inside a car labeled with a red cross to signal it was working as an amateur medic. (Portland Police Bureau)

Late Monday, police warned the crowd approaching the police union that the sidewalk in front of the officers was closed and not to block vehicular traffic through North Lombard Street.

The crowd dispersed around 1:30 a.m. and police made 24 arrests, including several wearing heavy body armor with rifle plating and marked with "press" insignia, those carrying a "press" pass, and possessing weapons such as knives and OC spray.

One individual who evaded arrest threw a full-sized baseball at pursuing officers. Those arrested were booked into the Multnomah County Jail on various charges, including interfering with a peace officer, disorderly conduct, escape, menacing, and harassment.