The number of areas across the UK axing IVF treatment is growing, according to a survey.

The data, gathered by the Fertility Network UK, also found the proportion offering the recommended three cycles of treatment has fallen to just over one in 10.

This comes as the NHS makes widespread cuts and the rationing of services in an effort to save money.  Breast reductions and operations to stop people snoring are on NHS bosses’ hit-list of 17 routine procedures that could be cut to save £200million annually. 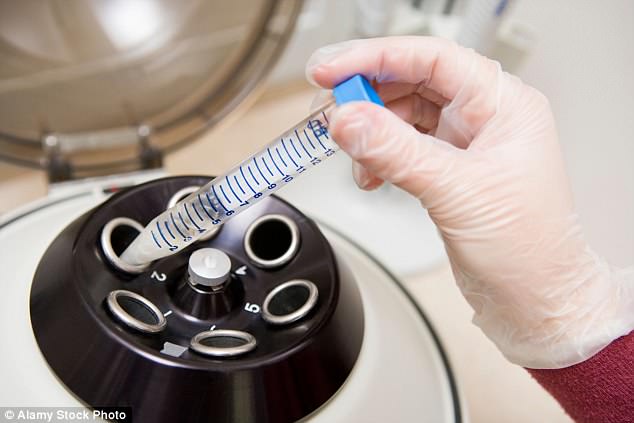 Speaking to The Guardian Aileen Feeney, chief executive of the Fertility Network, said: ‘[IVF] seems to be seen as something that can just be cut. [Infertility] is not being considered as what it is, which is a disease that has massive impact on those suffering from it.’

‘On top of all the emotional and physical stress of infertility then you have the unfairness of the fact that people cannot have access to something their neighbour could. Then there is the massive financial pressures of going private.’

The axing of IVF treatment comes despite guidance from the NHS group Nice (National Institute for Health and Care Excellence) that women under 40 should be offered three cycles if they have been trying to conceive for two years.

The number of centres no longer offering any cycles has increased from four to seven in the past 15 months.

Clinical commissioning groups offering the recommended three cycles has fallen from 16% (33) to 11.5% (24) in a year.

Experts said patients now face a postcode lottery of services, with some families even moving across the country to find an area that offers three IVF treatment cycles. Others are travelling abroad for treatment

The Fertility Network UK had also heard of one family moving 200 miles from Berkshire, in the south-east of England, to Bury in Greater Manchester so they could get three cycles of IVF.

Anne-Marie Minter, 33, and her partner Craig, 34, made the move to maximise their chances of having a baby because they were only entitled to one cycle of treatment at their previous address.

‘We were apprehensive at first as it is so far away from friends and family,’ she said. ‘But we are lucky the area is really nice and both our jobs are allowing us to work from home and be so flexible.’

Since last year, Herts Valleys and the Cambridgeshire and Peterborough clinical commissioning groups (CCGs) have removed all IVF services. Southend and west Essex have cut the number of cycles offered from two to one.

Other CCGs have reduced the the age limit for prospective fathers and same-sex partners to 52.

The CCGs will now fund treatment only for couples where neither partner has a living child.

In a bid to save £836,000 annually, Croydon last year became the first London borough to stop funding for IVF,

NHS Clinical Commissioners, the organisation that represents clinical commissioning groups, said: ‘CCGs are led by GPs whose first priority is always to the patient. Wherever possible they want to give them what they need. Unfortunately, the NHS does not have unlimited resources … there are some tough choices that have to be made.’With huge pressures being felt across the whole health and care system, the NHS has to review services to ensure they are sustainable and improve the health of the wider population.’

What are the 17 procedures to be stopped or reduced?

Ganglion excision – removal of noncancerous lumps on the wrist or hand

Injections for non-specific back pain