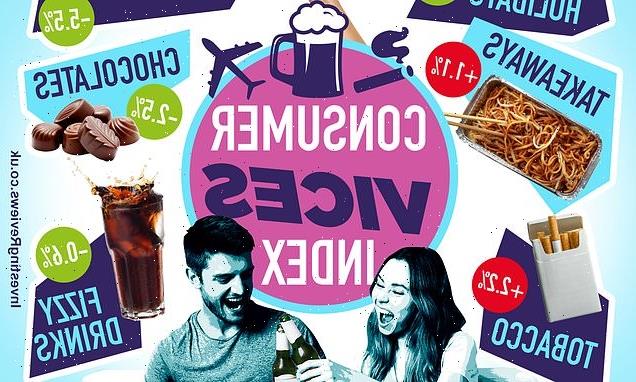 Good news at last for families hit by cost of living crisis? New Consumer VICE Index suggests alcohol, biscuits and fast food are not going up in price as fast as wages are increasing

Naughty snacks are becoming more affordable in Britain relative to other goods as wages increase, according to a new index.

Many of life’s guilty pleasures are beating inflation, with an index tracking cheeky consumer goods showing that treats like ice-cream and fizzy drinks are rising slower than wages in Britain are going up.

The findings come despite a broader cost-of-living squeeze driven by a spike in the price of essentials like fuel and energy. 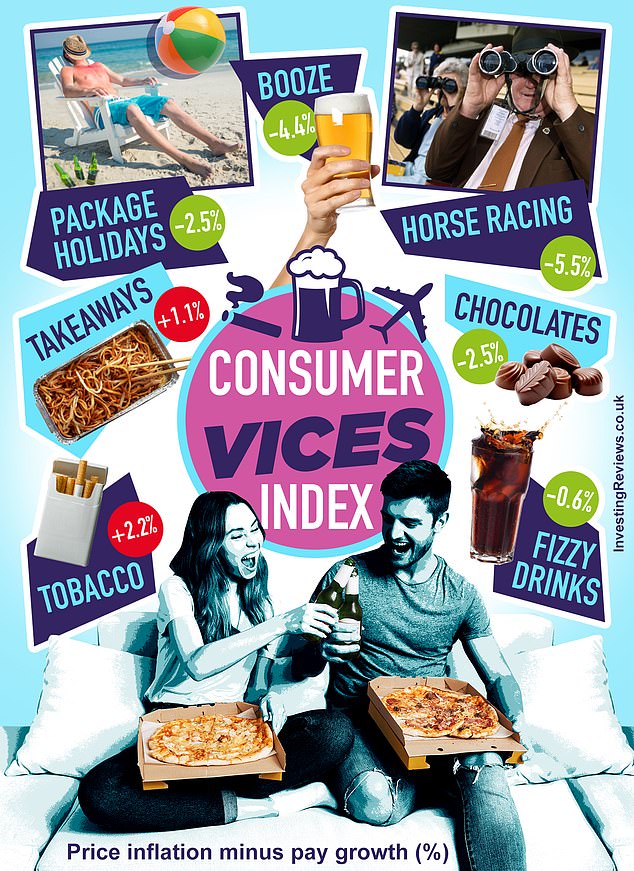 Takeaways and tobacca are still up relative to the increase in wages, but chocolates, fizzy drinks, package holidays and horse racing are all relatively more affordable

Independent economist John Hawksworth created a basket of around 100 goods that are considered minor vices in an effort to track the cost of Britain’s bad habits, making up the CVI.

While the CPI, used to measure inflation in Britain, is running at an eye-watering 9% – the CVI shows only an 4.5% increase, while pay grew by 5.6%.

Minus the pay growth, the treats work out 1.1% cheaper.

Booze: The price of off-licence alcohol has dipped 4.4% relative to wage growth

Chocolate biscuits, ice-cream, confectionery, sugar etc: Snacks linked to obesity have fallen in price by a tasty 2.5% relative to pay

Horse racing: Critics say it’s a “gateway to gambling addiction” but the official data shows that a day-out at the Gee-Gees has never been cheaper. Admission fees are down by 5.5% year-on-year relative to pay

Package holidays: Politicians in Spain recently slapped a six-drink limit on holidaymakers to combat a rise in anti-social behaviour. But deals are becoming more affordable. Down by 2.5% relative to pay

Fast food and takeaways: Curries, burgers, pizzas and other takeaway treats linked to obesity are starting to creep up in price — but only by a mere 1% relative to pay

Tobacco: The highest climber of all, but still only up in price by only 2.2% relative to wages

The study merged selected price data collected by the Office of National Statistics with Real Time PAYE Employment and Earnings analysis based on figures produced by HMRC.

In the 12 months to April, CVI prices climbed by 4.5% while pay grew by 5.6%, meaning life’s guilty pleasures are actually becoming more affordable.

The findings may provide some relief amid an otherwise glum economic climate.

Consumer Prices Inflation (CPI) remains much higher than median pay growth T9% vs 5.6%, owing to a spike in fuel and energy costs.

Scotland (0.4%) tops the CVI table due to relatively modest pay growth and a greater spend on tobacco products, which have risen rapidly in price over the past year.

Despite Northern Ireland’s Brexit woes, life’s indulgences in the Six Counties were relatively cheapest at -2% year-on-year thanks mainly to strong wage growth.

InvestingReviews.co.uk CEO Simon Jones said: ‘At long last we have some positive data to report. Booze, choccie biscuits, and even a trip to the local racetrack are all becoming more affordable.

‘No one is pretending any of these things are remotely good for you, but with all the doom and gloom around, people are entitled to live a little.’

Economist John Hawksworth said: ‘Families have been hit hard in recent months by sharp rises in energy, petrol and basic food bills that have pushed headline inflation rates to the highest seen in a generation.

‘But our analysis shows that there is a small silver lining in that a tight labour market has pushed up pay growth relative to pre-Covid norms across the UK.

‘This has made some of life’s guilty pleasures – from cake and biscuits to alcohol and package holidays – relatively more affordable over the past year, even as other cost of living pressures have increased.’ 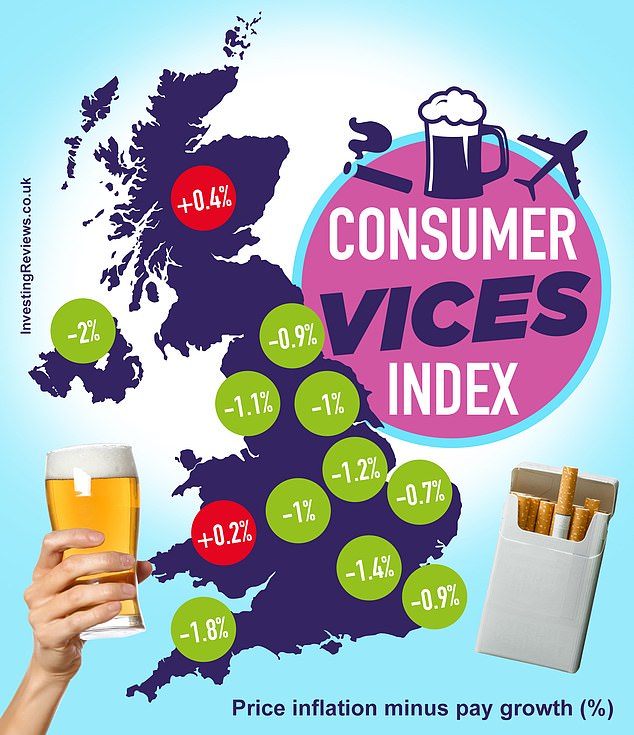