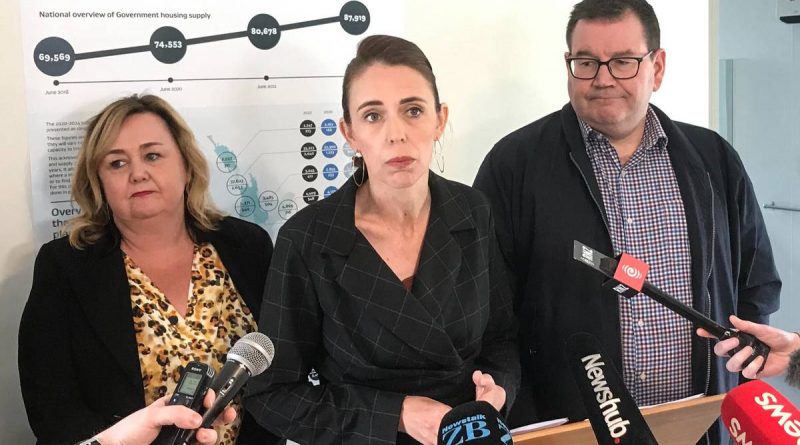 Prime Minister Jacinda Ardern says the Government is firmly focused on the economic rebuild and addressing the housing shortage and affordability.

Speaking to reporters in Nelson about this morning’s announcement of the details of a public housing build, Ardern said the current pace of housing prices was unsustainable.

The problem included low supply, low interest rates and the interface with local councils, as well as the cost of building supplies.

The Government would tackle planning laws, try to tilt the market to first-home buyers and boost the supply of all kinds of housing from public to affordable housing.

By late February she said the Government would have considered advice from the Reserve Bank and Treasury to try to take some heat out of the market.

Changes to planning laws would also be addressed early this year. By July the national policy statement on urban planning would also kick in, to try to open up land.

Ardern said the decisions on the economy had been the right ones during Covid-19.

“But we can’t stand by while house prices increase at the unsustainable rates of 2020.”

She said the public housing plan released today, setting nine areas where 8000 new state houses will be built,would build on that.

There were areas where the need was greater because of population growth outstripping the provision of housing. “This doesn’t mean other areas will miss out.”

Ardern said although the plans for 8000 new houses had already been announced in May, she believed it was significant. The focus for new builds will be in Northland, Hamilton, Bay of Plenty, Gisborne, Napier, Hastings, Palmerston North and Whanganui.

“We are and have been playing catch-up. We came in last term having had the previous Government selling house stock. We are working at a cracking pace on public housing.”

She said ramping up the speed of building had meant scaling up the number of tradies as well, so there was a focus on apprentices to try to get there.

Ardern said the goal was to make sure the houses were fit for purpose for the families who needed them.

Although the numbers were not enough to meet the current demand, she defended it saying there were other levers the Government could pull, such as working with iwi.

On affordable houses for first-home buyers, she said that required trying to address both demand and supply: “We will leave no stone unturned.”

She said moving to help first-home buyers had to be done carefully to ensure it did not create such high levels of demand that it resulted in a further spike in house prices.

Ardern said the Government would work with local councils around infrastructure as well as land supply.

She avoided giving targets of the number of affordable homes the Government hoped to build, saying the most important thing the Government could do right now was to keep addressing the issues of emergency and state housing rather than building for the market.

Ardern said she had conveyed “warmest congratulations” to Biden, and offered to co-operate on issues such as climate change.

She had spoken to Biden directly after the US election, but had not texted him directly as yet.

“It would be obvious to anyone in New Zealand that you come into politics with very different perspectives to other world leaders … It’s easier to [work with them] if you have shared values.”

She said the Trump era had been “tumultuous”.

Ardern earlier today described new US President Joe Biden as a “good friend of New Zealand” after his visit here in 2016.

“Under his presidency the strong and close relationship that New Zealand enjoys with the United States will continue to develop and flourish,” she said.

“I hope we see a more settled period, but still one in which ideas are contested.”

New Zealand had always had an independent foreign policy, and that would not change under Biden, Ardern said.

Ardern said there was as yet no data on whether the vaccination would help reduce transmission of Covid-19.

New Zealand was in the mix for early vaccine procurements, but it was only right that countries that had devastating death rates from Covid-19 got earlier vaccines.

She said New Zealand was also supporting countries which could not afford vaccines: “It would be a moral failure for countries not to receive vaccines because of inability to purchase.”

She did not believe New Zealanders felt anything other than lucky at the position the country was in compared to others.

“I’ve never heard anything other than gratitude.”

Labour’s caucus is on its annual retreat – a day of workshops for MPs as they prepare for the year ahead.

It’s usually held at the Brackenridge retreat in Martinborough, but Labour’s caucus is too big for it to be held there.

The day started with Ardern addressing her MPs and dubbing 2021 “the year of the vaccine”.

This is her Government’s “top priority”, she said.

Ardern reflected on 2020 – a year she had previously labelled as “horrendous” – but was mostly forward-looking.

“Our goal has to be to get the management of Covid-19 to a similar place as we do seasonally with the flu.

“It won’t be a disease that we see simply disappear after one round of vaccinations across the population.”

Ardern is expected to expand on this when she talks to press this afternoon.

She is also expected to offer her congratulations to new US President Joe Biden.