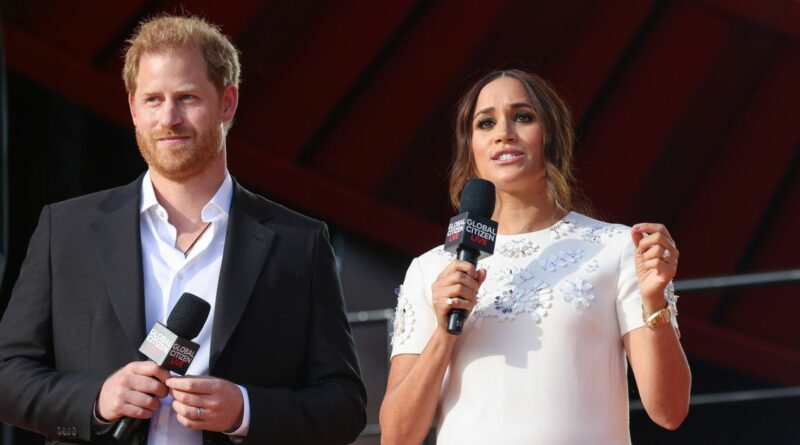 Prince Harry and Meghan Markle purposefully 'self-generate publicity which earns them the mega bucks', according to a royal expert.

Royal commentator Caroline Aston launched a scathing rant about the Duke and Duchess of Sussex during an appearance on GB News on Saturday.

The comments came after the couple's recent trip to New York where they met political figures, such as the city's mayor Bill de Blasio and the US ambassador to the UN Linda Thomas-Greenfield, as well as some children at a primary school in Harlem.

Aston said that the trip "did rather resemble a state visit", reports the Express.

She fumed: "And let's face it. Self-generated publicity is the name of their game. It has to be to earn them the mega buck deals they're relying on to fill those coffers."

She added in a in a tongue-in-cheek jab that their financial support from Prince Charles was "so cruelly emptied down to the last few millions".

Since stepping back as working royals at the start of last year, and subsequently moving to California this year, Harry and Meghan signed a deal with Spotify thought to be worth around £18.3 million and another with Netflix estimated at around £71 million.

Aston also accused the Sussexes of being hypocritical, making grand public appearances when in the past they have sought privacy.

"This oh-so private couple that stepped away from the glare of publicity in the old country where we're sitting.

"And yet seem to have become extremely public property."

The royal commentator went on to claim that there are "quite a few Americans" calling for Harry and Meghan to drop their titles and "stop behaving like this".

Harry and Meghan have come under fire from other royal commentators too following the New York visit.

Katy Nicholl from Vanity Fair accused them of being 'out of touch' following their visit to the school in Harlem.

As Meghan read to the kids from her children's book The Bench, she donned a burgundy Loro Piana cashmere coat, which is thought to cost around £4,282, and matching wide-leg trousers, which are reportedly priced at £1,235.

Speaking on True Royalty TV's The Royal Beat, Nicholl said: "Turning up at an underprivileged school in Harlem in a couture coat that costs more than the combined incomes of most of those parents at the school – it doesn’t make any sense.

"It just shows them to not be in touch."

She added that the Sussexes are far more susceptible to these PR blunders since leaving the Royal Family.

""If they’d been shielded by the ‘royal umbrella’, they wouldn’t be falling into so many of these traps, and they’d probably still have a degree of popularity, and a chance to have a voice," she concluded.