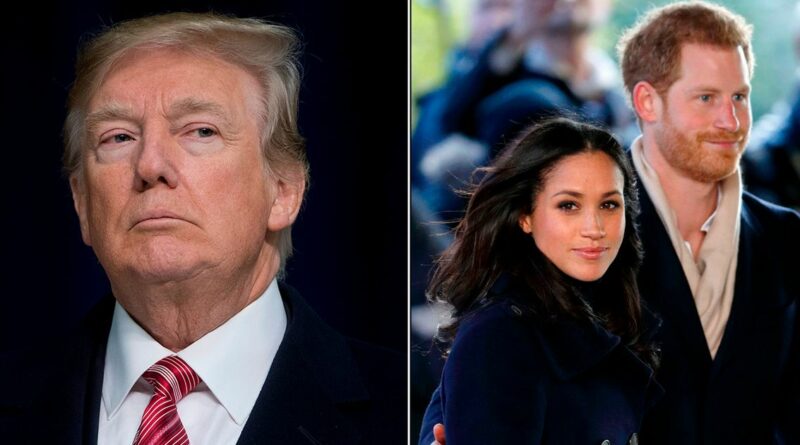 Donald Trump has said that the Queen should strip Prince Harry and Meghan Markle of their royal titles.

The outspoken former US President made the comments in an explosive new interview with Piers Morgan, which debuted on Sunday evening.

While saving plenty of kind words for Her Majesty, Trump was not so generous about his compatriot Meghan Markle and her husband Prince Harry.

He said: "The only thing I disagree with the Queen on, probably one of the only things ever, is that I think she should have said, 'If that’s your choice, fine."

"But you no longer have titles', you know, and frankly, don’t come around where you’re just, because her loyalty is to the country," Trump said.

"They want to use their royal titles to exploit them for massive financial gain. Without any of the duty that comes with the royal titles."

Trump also predicted that the Sussexes' marriage would fail, and that when they do split "it’ll end bad".

"I wonder if Harry’s gonna go back on his hands and knees back into the beautiful city of London and say, please. You know, I think Harry has been led down a path," he said.

In the interview the former President even told Piers that Harry is "whipped", adding: "I won't use the full expression but Harry is whipped like no person I think I've ever seen."

An amused Piers chimed in: "The most whipped man in the world."

It is not the first time Trump has let his unfavourable view on the Duchess of Sussex known.

Back in December Donald Trump took aim at Meghan Markle in a brutal rant, accusing her of 'disrespecting the Queen' and 'using Prince Harry' in a televised chat with Nigel Farage.

Piers Morgan Uncensored will air in full on TalkTV on Monday as part of the new TV channel's launch schedule.