London: Prince Harry has broken his silence over his departure from the royal family in an emotional speech in which he also defends wife Meghan from claims she is responsible for the bombshell split.

In an address to a charity he founded more than a decade ago, an emotional Duke of Sussex said it "brings me great sadness that it has come to this" and appears to take aim at the terms of an agreement with Buckingham Palace that dictates how the couple will operate outside the umbrella of the House of Windsor. 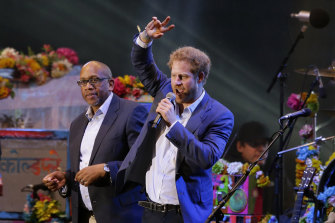 However Harry's speech in London on Monday morning Australian time makes it clear he is not entirely happy with the arrangement but stresses he has the "utmost respect" for the Queen.

In his speech to Sentebale – a charity he set up with Prince Seeiso of Lesotho following a gap year in the African country – Harry said he was "born into this life" and took aim at the British media.

"When I lost my mum 23 years ago, you took me under your wing. You've looked out for me for so long, but the media is a powerful force and my hope is one day our collective support for each other can be more powerful because this is so much bigger than just us," he told members of the organisation which works with children and young people affected by HIV.

Harry is expected to leave the United Kingdom shortly to reunite with Meghan and their son Archie in Canada.