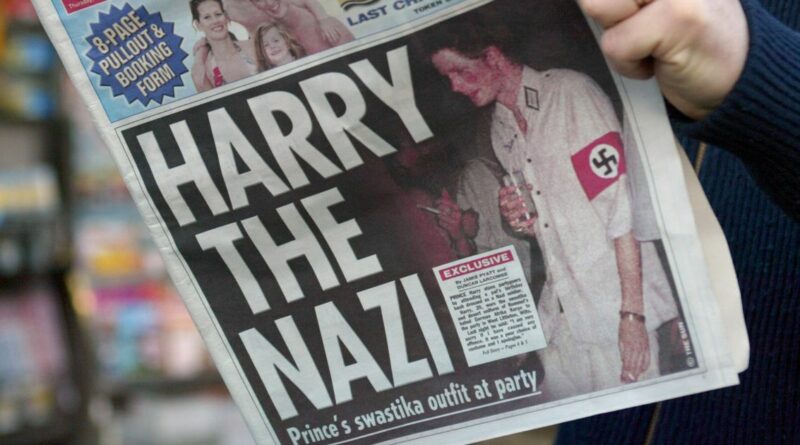 Prince Harry reveals in his tell-all autobiography Spare that he can still recall the precise smell of the costume shop where he claims William and Kate talked him into buying a Nazi uniform.

Although the book isn't officially out until tomorrow (January 10), the Daily Star has managed to get an early copy of it.

And the Duke of Sussex has shed some bizarre light on the infamous Nazi uniform saga.

READ MORE: Impact Wrestling star tells fat-shaming trolls 'I don't give a f**k what you say'

The Prince received widespread condemnation in 2005 when he elected to wear the offensive outfit.

In his memoir Spare, Harry, who was 21 at the time, writes that William and Kate "howled with laughter" when they saw the outfit.

Harry said of the experience: "I phoned Willy and Kate, asked what they thought. Nazi uniform. They both howled. Worse than Willy’s leotard outfit! Way more ridiculous! Which, again, was the point.”

That extract was leaked last week, but now the Daily Star can reveal the Prince Harry has also gone into detail about the very specific smell the shop he got the outfit from contained.

Via a ghostwriter, he said: “On the day of the party it was decided that I'd go to a nearby village, Nailsworth, where there was a well-known costume shop.

“Surely I could find something there.

“It's a bit blurry, though some things come back with total certainty.

“The shop had an unforgettable smell.

“I remember its musty, mouldy funk, with an undercurrent of something else, something indefinable, some airborne by-product of a tightly sealed room, containing hundreds of pairs of trousers, shared over several decades, by thousands of humans.

“I went up and down the rows, sifting through the racks, seeing nothing I liked.

“With time running out I narrowed my options to two: A British pilot's uniform and a sand-coloured Nazi uniform, with a swastika armband.”

It was at that point that, rather than thinking wearing a Nazi uniform might be a bad idea, he phoned his brother and sister-in-law and got their apparent approval for it.

He also claims the photos of him in the uniform sold for around £5k to the British press, and called the ensuing media coverage a “firestorm, which I thought at times would engulf me”.