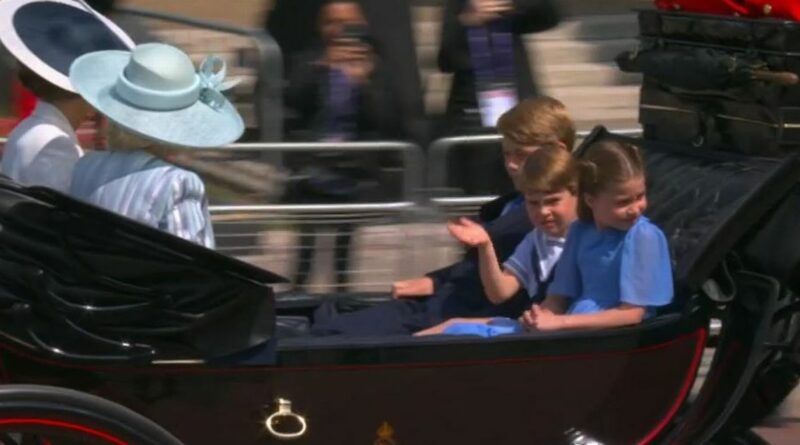 Prince Louis has delivered a sweet nod to his father Prince William in his second Trooping the Colour appearance.

The four-year-old prince was seen riding the horse carriage along with brother Prince George, eight, and sister, Princess Charlotte, seven, as well as their mother Kate Middleton and Camilla.

The group are the first royal carriage heading to the Horse Guards Parade.

Video shows the young prince wearing a sailor suit with navy and white stripes as he waves to the crowd outside Buckingham Palace.

His older brother, George, looks all grown up in a suit while sister, Charlotte, dolls up in a cornflower blue dress.

In a brief moment, Charlotte is seen placing her hands on her younger brother when she sees him waving "manically".

Together they watch the parade from the Major General’s Office.

Charlotte, George and Louis will later step onto the Buckingham Palace balcony together, joining the Queen and all the full-time working royals supporting her.

Eagle-eyed royal fans spotted the resemblance of Prince Louis' outfit to the one his father, the Duke of Cambridge, wore when he was young.

One viewer wrote: "It looks like Louis may be wearing a sailor suit once worn by his father, Prince William."

A second added: "In carriage one, besides Duchesses of Cornwall and Cambridge, is also Prince George, Princess Charlotte and Prince Louis in a gorgeous sailor outfit.

"So cute! This is Louis’s first official appearance."

Given his age, Prince Louis has attended fewer major events.

He made his debut on the Buckingham Palace balcony in 2019 when he was just over a year old.

Prince William was spotted wearing a sailor suit in his balcony appearance during a flypast in the 1985 Trooping the Colour.